You may recall from this post that I fell in love with Guild acoustic guitars when I first started playing, but the 6-string models that I played and owned didn’t have the sound that was in my head. I kept my ’69 D-40 the longest of the bunch, but it just sat in its case until I sold it. While I found my sound in other brands, the thought of not finding a Guild 6-string acoustic that suits me has always been in the back of my mind. I think the last time I played a Guild acoustic was in the early 2000s when they were still being made in Westerly and Corona. I had pretty much given up hope of finding one I liked.

Reading generally positive reviews of the guitars made in Tacoma, New Hartford and Oxnard rekindled my quest. I was hoping to find a traditional model, but knew that the dreadnoughts and jumbos were out because I’ve tried those many times before. However, there was one Guild style I never played – the small jumbo F models. Strange but true, I know! So the quest began. I started out looking at vintage F-30 and F-40 models and worked my way up to more modern offerings. I was afraid that the F-30, with its slightly smaller body, might not sound “big” enough so I focused my search on the F-40. Besides, I could always revisit the F-30 in future.

I found a 2012 New Hartford F-40 Valencia and I thought it was visually appealing because it had the classic body shape of from the 1950s and 1960s and the simple G headstock inlay found on the 1950s F-40. But visual cues aside, this isn’t an F-40. Guild’s silly nomenclature strikes again! It doesn’t have a maple body with arched back like the F-40. With its mahogany body, this model more closely resembles a 1960s F-47, but with less fancy appointments. Okay, so it’s not an F-40 or an F-47, but visually it still pushes the right buttons. Even better, Guild upgraded the guitar with a red spruce top. The majority of my 6-string flattops have red spruce tops and I’ve come to appreciate (and even expect) the immediacy of the pick attack, crisp fundamental, power and headroom that usually comes with it.

So I took the plunge (no Nyquil or alcohol involved) figuring I had to start somewhere. After the guitar arrived, the first thing I noticed was the compression grain in the red spruce top. Compression grain is formed in tree’s trunk under large limbs. Some people don’t like the looks, but fine sounding guitars can be made with it. I think it’s cool and this top has a lot of silking so it's likely been perfectly quarter sawn.

The construction, fit and finish of this guitar are really top notch and I’m super impressed. The Antique Burst top is nicely done and the tortoise binding goes well with it. They really knew what they were doing in New Hartford! The only nits to pick are 1) it’s not an F-40, it’s a less fancy F-47, 2) the finish seems a little thick compared to my Martins, and 3) I would have preferred a 1 3/4 inch (44.5 mm) nut width instead of the 1 11/16 inch (43 mm) nut. That last 1/16 inch really makes a difference. The 3-piece mahogany neck shape has a full C profile, that I would call medium, i.e. - not a baseball bat. It’s very comfortable and has that Guild feel. The body dimensions match those of the 1960s F-47 (if catalog info is to be believed). Its “small” size is deceptive because of the narrow waist and upper bout as well as light weight -- 4 lb (1.8 kg). Make no mistake, this is a full size guitar, but is comfortable to play while sitting or standing. Sidebar – this version of the F-40 was made in Tacoma and New Hartford. They either didn’t make many of them or the people who have F-40s love them and hold on to them. They are hard to find! The current version of the F-40 from Oxnard is a completely different guitar (full size jumbo) that is more closely related to the old F-48 (thanks Guild for screwing up the nomenclature… again).

And now we come to the guitar’s tone. It’s modern, yet familiar and falls between a 12-fret dread and 14-fret dread. Sort of like a bigger sounding 000-18. It’s better balanced from top to bottom than my Martins, but still packs a punch which is a plus for me. I always worry how the notes on the first five frets of the low E string will sound on a jumbo guitar of any brand. In my experience, they can sound loose (some people call it tubby or flubby) on full-size jumbos. I had a JF-30 that was tubby and I didn’t keep it long. My F-412 has it to a degree, but it’s a 12-string so there is a lot going on harmonically and it’s easy to overlook on that guitar. I’m happy to report that the lowest notes on this F-40 are tight and hit like a velvet hammer. The overall sound is open, rich and the notes ring clear. The fundamental blooms quickly into overtones after the initial pick attack and note separation is maintained. There is no muddiness with this guitar. Headroom is excellent (red spruce!) and it approaches the volume of my dreads, but can’t quite match them. It’s great for flatpicking and can do anything a dreadnought can. The tonal balance makes it well-suited for finger style playing, but the lack of a wider nut can make fingerstyle a little more challenging. When played softly, the tone is sweet and remains full. Sometimes red spruce tops need to be driven a little harder for the guitar to get into its optimum tone zone, but that’s not the case with this F-40.

I’ve had the guitar for about a month now, but is it a keeper? I still need to play around with different strings to dial in the tone. It already sounds quite good with D’Addario PB 12s and I’m optimistic that this guitar will be “the one”. In the meantime, I can heartily recommend the 2006 - 2014 F-40 Valencia as an excellent alternative to a dreadnought. If you like D-size guitars, this one is worth checking out. I’m really enjoying it for that reason alone, but I’m also digging the classic lines of the 1960s F-body, wide headstock and G inlay. I think my quest has ended.

Oops! Mods, this should be moved to the Acoustics forum. As a mea culpa, here's a gratuitous shot of the headstock showing the rosewood overlay with G inlay.

Big congrats GG! I love the NH Valencia bursts. They are very striking guitars and often great deals can be found on the used market. I love it for everything you’ve covered - size, classic shape, red spruce top, tortoise binding, a little bigger than my F30’s but still balanced and versatile. I’ve come close twice but the only thing that kept me from getting one is the dang 1-11/16 nut. It also would be nice to have an ebony neck, but the price point is hard to beat for a newer build with typically no neck or fret issues to worry about yet. Enjoy!
Last edited: May 29, 2020

HeyMikey said:
It also would be nice to have an ebony neck, but the price point is hard to beat for a newer build with typically no neck or fret issues to worry about yet. Enjoy!
Click to expand...

Thanks! I prefer ebony fingerboards, too, but I have to say that the rosewood used on this particular guitar has very tight grain and is very dark. It almost looks and feels like ebony and that makes me happy. Do your F-30's have wider nuts than the F-40?

I did notice the darker fretboard on yours, which is nicer than the normal lighter RW. I chose NH Standard F30 series for the 1-3/4 nut. It does make a difference for me. I wish they made more with it but the choices are very slim. Guild is behind the trend on this aspect IMHO.
B

So true! I'm super impressed with the build quality of this guitar.
S

That is some beautiful silking in the top. A very thorough and interesting write-up. That just might be the guitar to work up an acoustic arrangement of "Dance With Me".

sailingshoes72 said:
That just might be the guitar to work up an acoustic arrangement of "Dance With Me".
Click to expand...

Speaking of Dance With Me, years ago Chet Atkins did a beautiful instrumental arrangement of the song on Austin City Limits. I taped it off the radio back then, but also recently found it on YouTube. Check it out sometime!

LTG's good friend Kim from the NH plant has/had a GSR F-40, the first series GSR, that was wonderful. I played it constantly at the last Lets Meet Guild, great guitar. The older F-47's were, I believe, the mini jumbo shape.

Congrats ! Your speaking my language .
I had the contemporary CV-1 which is a F40 equivalent less wood combination and it had me looking at getting a F40 . I like the CV 1 a lot .

I actually did buy one and it was a burst also very pretty unfortunately it's tone and lack of hydration put it on the return list . I would be of had another one by now if I could focus . Lol but I keep getting distracted by other guitars.

Wow, what a write up! And thanks for a little bit of history lesson. What a fabulous guitar! I'm not near as guitar-knowledgeable as you, but when I got my New Hartford F-50R, that totally did it for me.

Bill Ashton said:
Greg, poison me if I am wrong, but the Tacoma/NH F-40's were "Auditiorium" size guitars, with their F-47's being the same except dreadnaught-depth.
The older F-47's were, I believe, the mini jumbo shape.
Click to expand...

Based on the 2012 NH catalog, the F-40 and F-47 were called "Grand Orchestra" size and had the same dimensions, including body depth. My F-40 matches these dimensions exactly. 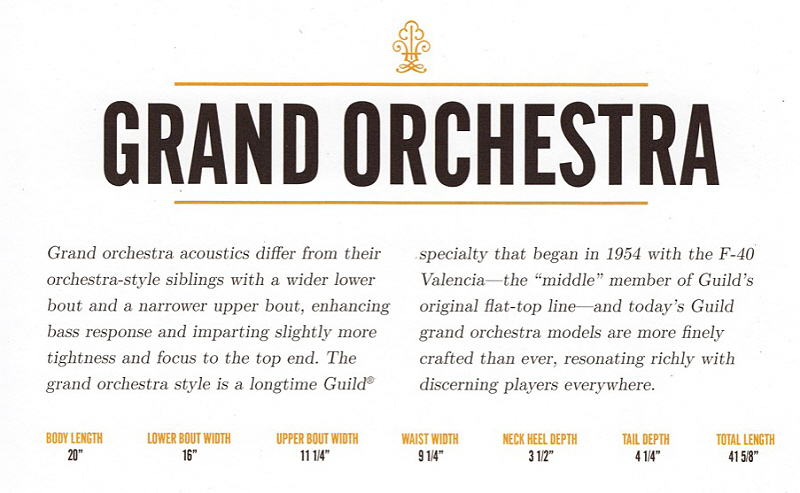 The length and lower bout width of the NH models are the same as the original 1966 F-47, but the original's body is about 1/2 inch deeper. 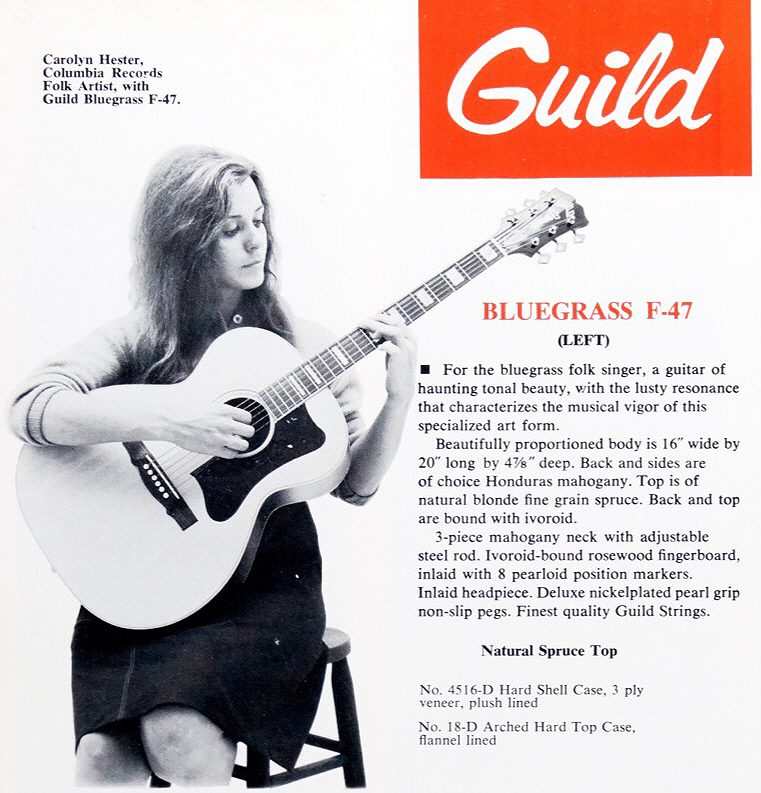 So, while the NH F-40 and F-47 have the visual cues of the original '60s version (see comparison below), they are not identical. The silhouette of the NH body is classic Guild small jumbo and that has a lot of appeal for me. I'm not sure I would want or need the original's extra depth on my F-40. It's pretty terrific the way it is.