D-55 on its way to Guild for warranty service

I'm sorry for the delay, folks. Unfortunately I had a very difficult phone call today regarding a life-or-death medical decision for a family member, and it has kind of taken priority over posting.

Anyway. Here are the pictures, and I will write up my impressions in the next post. 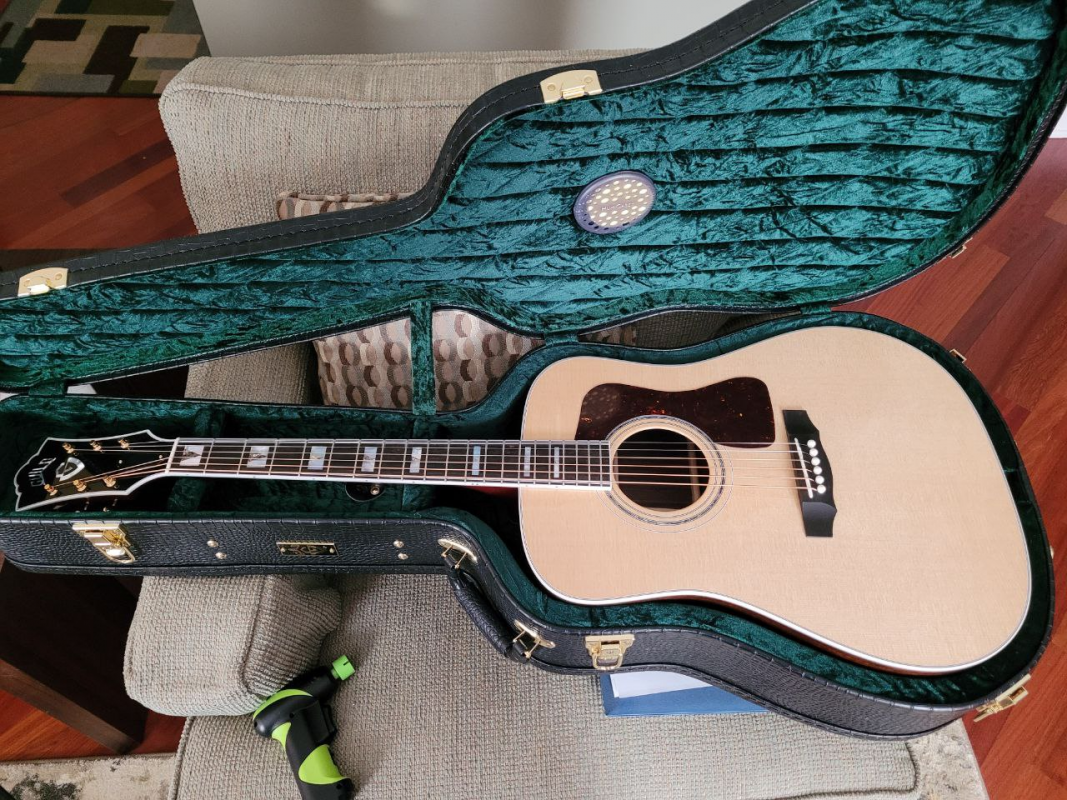 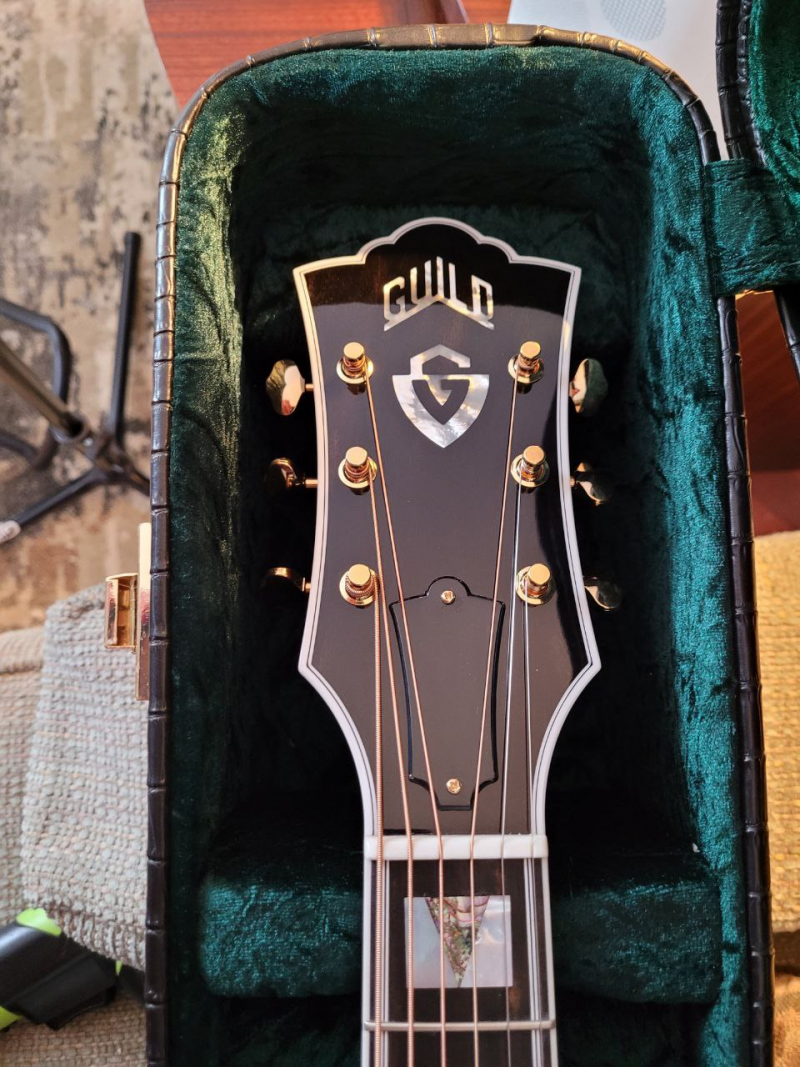 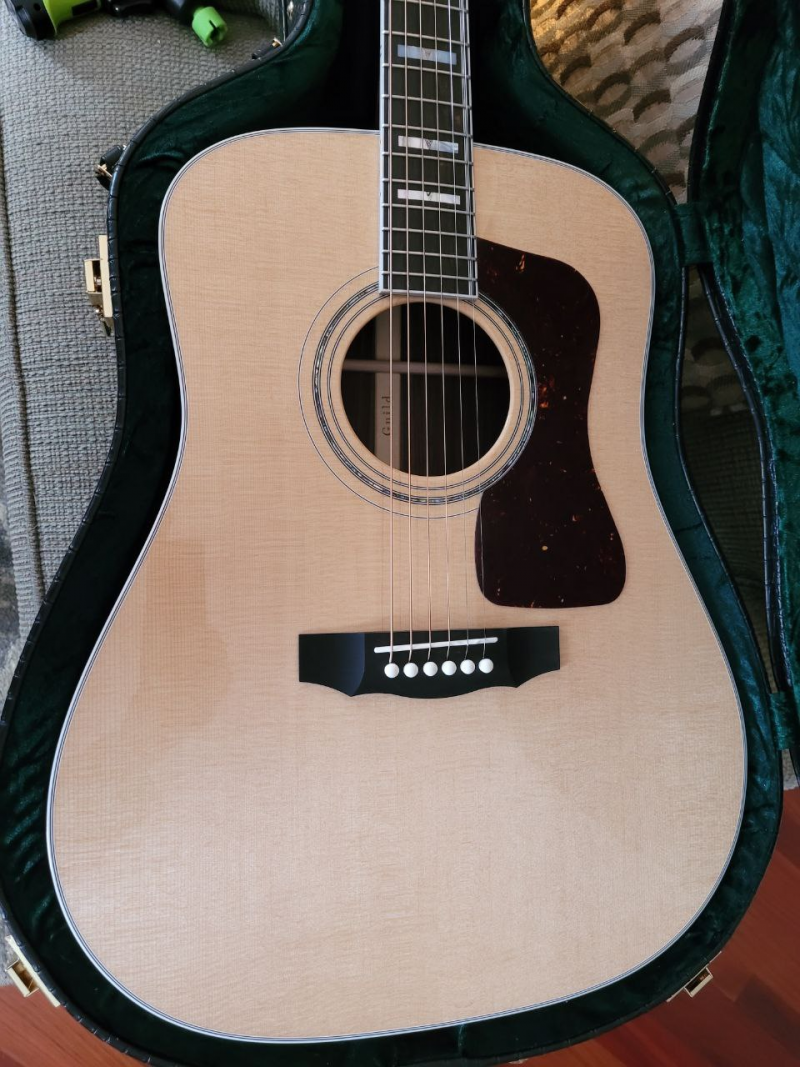 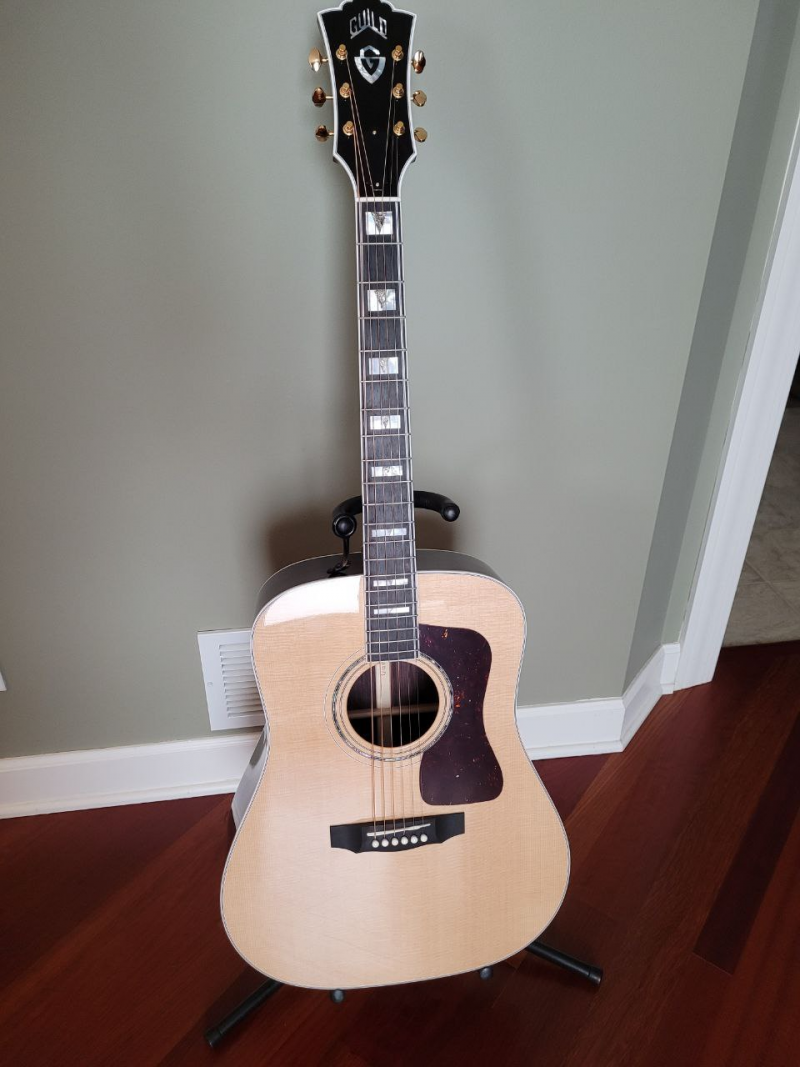 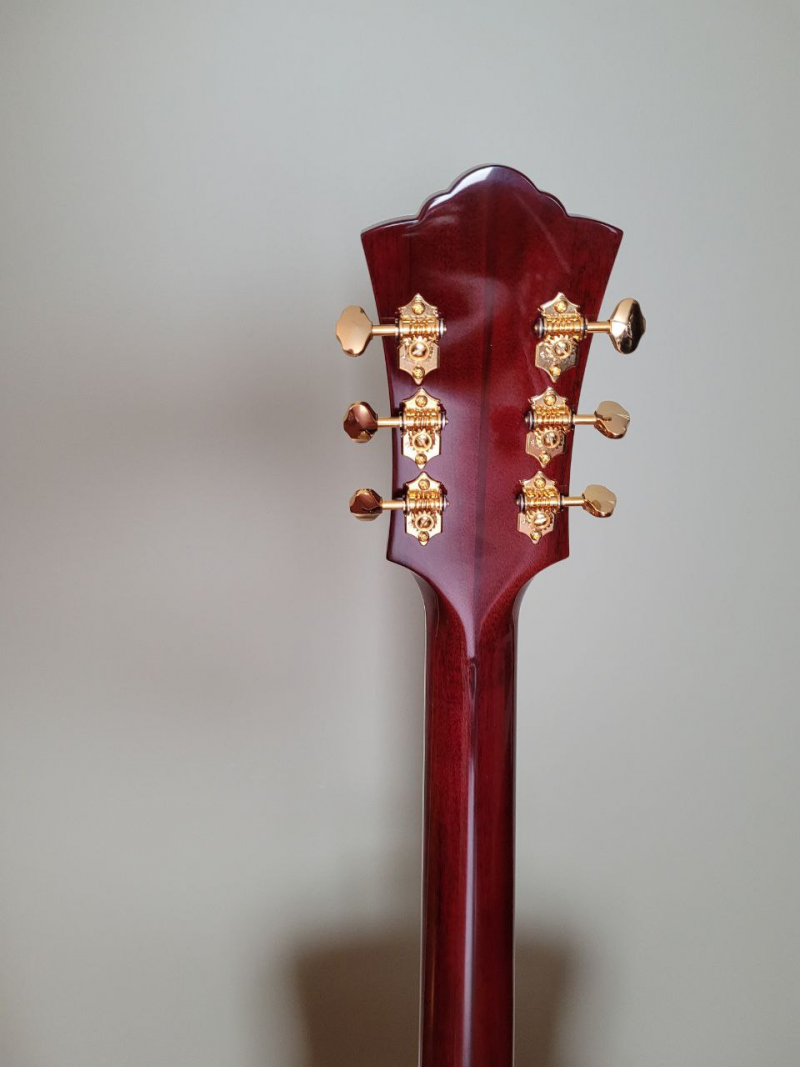 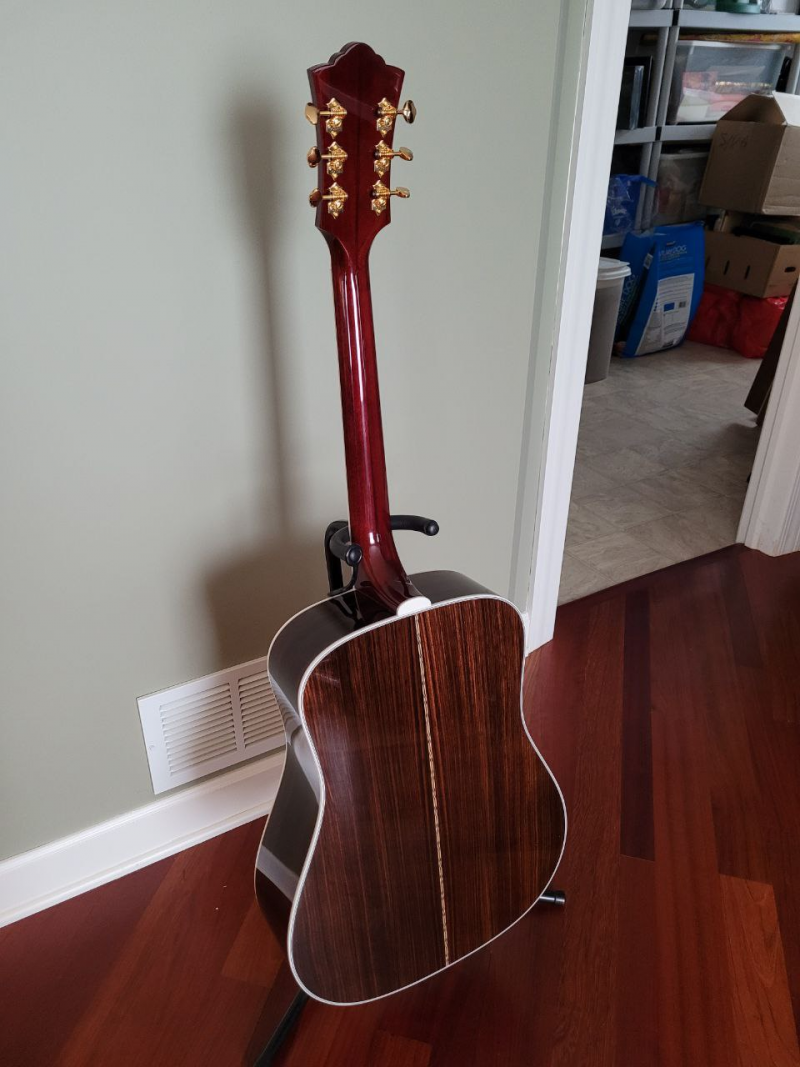 After all this waiting and buildup, I was hoping it would be perfect, and I am obliged to report it is not. But it will be.

The positives:
The negatives:
I will take it to my regular guy for setup as soon as I can spare the time. Family obligations are probably going to occupy me for a while, though.

First of all. prayers and well wishes for you and your family member.

That is one beautiful guitar. Looks flawless! It should be a real delight to play after a good setup.

I know what you mean about not wanting to touch it, LOL. I have one that never leaves the house, my D15.
S

dwasifar:
So sorry for your tough day and medical decision you had to make.
The guitar is beautiful and you will get the little "hiccups" worked out
J

Find someone who can sew to lengthen the case strap a little. I think if you go too far the weight of the lid will rotate the case off the floor when it is empty.

I an very sorry to hear of your families difficult decision. That is way more important to deal with that guitar forum stuff.

Sorry to hear about the family situation, and hoping the difficulties are bearable.
The guitar is as beautiful as I expected, and it has the open tuners! I wish mine did. Put some 13s on it and let that baby sing!
Last edited: Nov 24, 2022

So very sorry about your family member. Prayers for you, your relative, and all who are affected by the situation.

Regarding your 'case strap issue'...if you really feel it is too short, a luggage repair shop would be your best bet.

Before you do, remember that material stretches out with use over time and the 'strap' may loosen itself somewhat.

BUT: the strap is usually short for good reason...when removing and replacing the guitar from the case you should ALWAYS have a hand on the case lid...never leave the lid up with the guitar in the case...especially if you are one of those guys who likes to leave the accessory lid up and the guitar on an angle with the neck resting on it to be able to grab your guitar quickly.
As you point out...the case lid bites.

It's a beautiful guitar...would be a shame to see it dinged.

Hope you get a chance to play it after your sad family problem is resolved.

I am very sorry to hear about your family member who is not well. All the best with that.

The guitar looks beautiful. It sounds like the Guild Oxnard facility needs to hire a new setup luthier. A new top-of-the-line guitar should not arrive with a funky nut. Still, I suppose a new setup is to be expected regardless so hopefully you can get the nut taken care off. I imagine the guitar will need time to acclimate fully to it's new home too. This could take a while as you well know.

Best wishes for a positive resolution to your family issues. As for the new guitar, I see some gorgeous silking all over that top - so with age as it darkens, those medullary rays will pop out beautifully. And the V-block inlay just below the peghead is droolworthy all by itself! Congrats & Enjoy!!

So very sorry to hear of your family's troubles, especially over the holiday...

FWIW, when I got my new F512 in 2013, it was not long before that strap pulled out at the case side entirely on me...TKL-made New Hartford case...the strap was only held to the base of the case buy one or two staples...like Swingline paper staples, little thin things. When I eventually moved the guitar on, I just banged the staples back in and they held fine.

All this is to say, losening the strap may not be a hard task...should you have to? No. And you are allowed to be as irritated as I was...

Very sorry to learn of your family member. You all have my best wishes.

The guitar is beautiful. Irritating as the nut issue is, it's easily taken care of. May that be the only issue you have wth the guitar for many years. Well, that and the case. I bought one of these premium faux-gator skin Guild dreadnought cases in September to replace another case, and I have the same strap issue. But it hasn't been a big deal.

After all you've been through with the warranty repair/replacement, I hope this gorgeous instrument brings you much happiness.

I have my AA F50R in a case just like that with the gold hardware and faux alligator skin, it also doesn’t open wide enough. I’m always worried I’ll bite the top with the case latches.
W

That set up will be a piece of cake dwasifar, she's a beautiful guitar for sure. So glad Guild made this right.

On the case issue, I'll tell you a little story. Bill Collings, as he was obsessed with guitar building, was also obsessed with guitar cases. So much so that Bill designed his own cases, with every aspect/part of the case manufactured in house by Collings.......even the case latches. Bill called it the Collings Traditional case. Collings built the Traditional case from around '17 till around late '19. As an accessory, they sold for $800-$1000, but were factory equipment with a new guitar for those 2-3 years. I've got an '18 D2HA and it came with the Traditional case, and I assure you they are the finest case I've ever owned.

Then when Bill died, they discontinued production of the Traditional cases. Man, the Collings world turned upside down. In the beginning I didn't fully understand what all the complaints were all about as I also have a Collings CJ that came with a TKL case, nothing spectacular, but functional. Then later I bought the D2 and discovered what all the excitement was regarding the Traditional cases.

Fast forward to my ordering my newest D1A, knowing it would come with a TKL case, which was fine......I was buying the guitar, not the case really. The D1A arrives, and after growing accustomed to the Traditional case of the D2, the TKL case was, and is a real letdown. Just like yours, the center strap that limits the opening of the case top is too short. They may not sound like a big deal, but if one isn't careful, that top AND those latches could potentially fall right on to the top of a guitar being put into or taken out of the case. The TKL case doesn't mesh well either, as I have to kind of jiggle the top to get the latches to mesh. I'd never appreciated a well thought out, well built guitar case until I grew accustomed to the Traditional case, THEN got the new TKL case. I have to be extremely careful with this new TKL case. I was taking a guitar out of the new TKL case one day, and did NOT have my other hand on the lid. I got the guitar half way out as the case lid began to drop. Fortunately i was able to quickly snatch the guitar out from under the lid before it fell. Otherwise there would have been latch claw marks all over the top of that guitar. It's made me a believer in fine guitar cases. I suppose what we both need to do is cut and extend that center strap.

My guess is that Collings was using so many resources on case building that when their back orders began growing due to Covid, something had to give, so they discontinued their case building.

The Traditional cases now sell for around $1400, IF you can find one. What I see quite a bit on Reverb are folks selling '17-'19 Collings guitars with TKL or other cases, and what those sellers do is sell their Traditional case separately for $1400, then buy a TKL case for $250, and sell the guitar with it.

Not sure who makes those cases for Guild, but I'll bet they are TKL?

On a different not, I was very sorry to hear about your family member. It sure puts the priority of guitars in perspective though. I hope all turns out well for you sir, both the family member and the D55.

^ West, those cases are made by Cordoba... They are called Humicases.
W

chazmo said:
^ West, those cases are made by Cordoba... They are called Humicases.
Click to expand...

Ah, I see. Then I am surprised to see the same issue as with so many TKL cases. That D55 case is pretty though.

I had a new Gibson case made by TKL that did that. After a few years of worrying, I finally got rid of it & felt much better!

I think...that you get what the manufacturer is willing to pay for. Outer covering aside, my Huss & Dalton TKL cases are much nicer than Guild's, although I only have had Tacoma and New Hartford to compare with.

When I got my "fire sale" F47R, it came with a hardshell case, but it fit so poorly I had Karl looking for another, thinking it got switched! Like the guitar was too deep for the case (not unlike all those poor Fender Kingman's we saw that got ruined). I actually wound up with a CO-1 case, a "downgrade," but it fit properly.

I always considered the short strap on the case as a feature but then in the process of handling band and orchestra instruments I got used to a lot of cases and trained myself to hold the top of the case open with one hand while removing the instrument. The alternative was not always safe or pretty and not being able to open the case as much as desired served as a reminder. I also admit to being a closed case person. An open case, with or without an instrument, is an attractive nuisance for cats and children

Ideally the selling dealer would set the instrument up to your liking before delivery but that doesn't always happen and this was not a case where it could.

Ultimately neither issue would be a deal breaker for me.