Am I playing so fast that I’ve scorched the ebony? 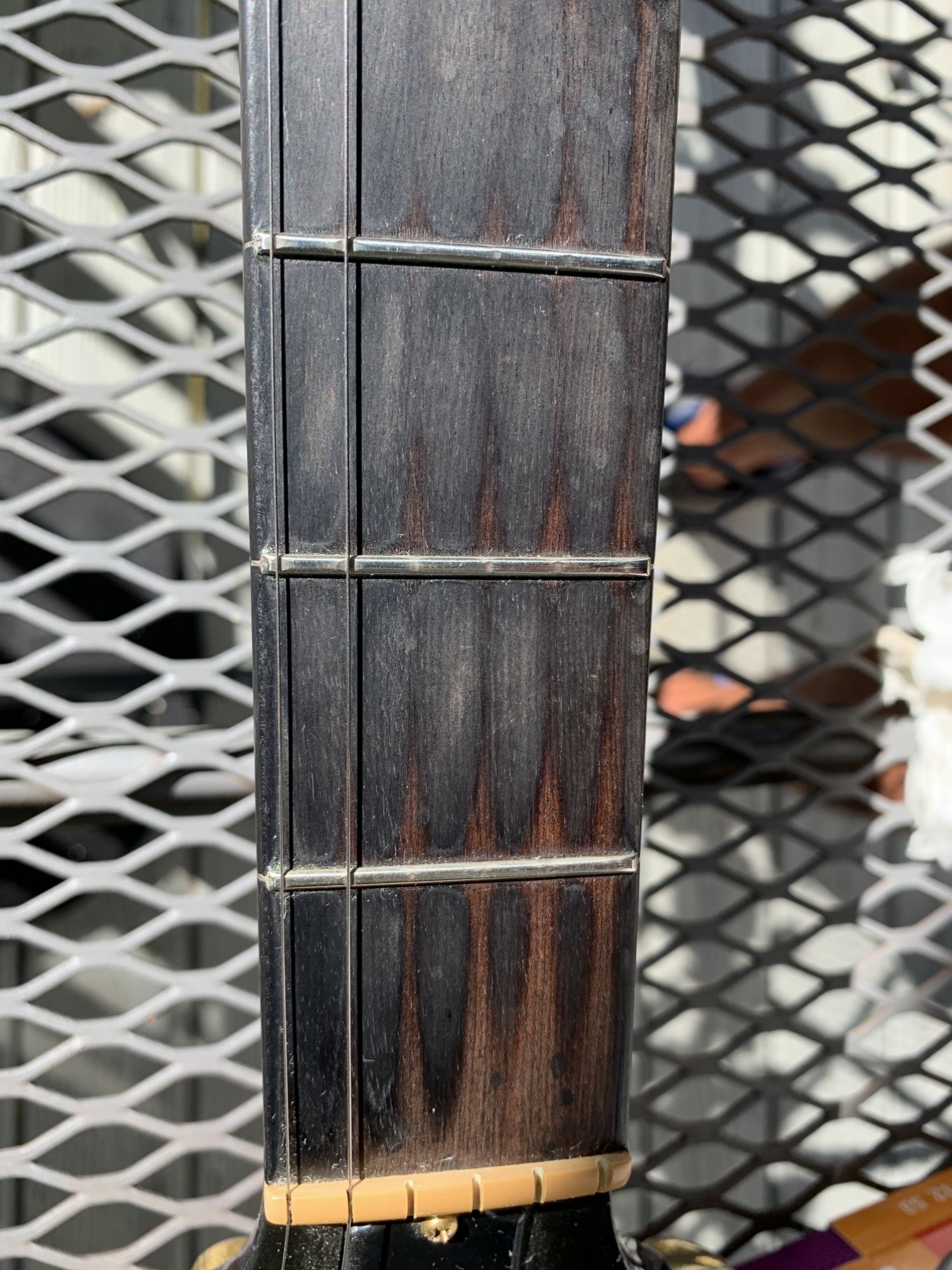 Qils, etc from your fingertips...

Do you use hand lotion before you play?

No I almost never put anything on my hands

It looks really dry...I've never seen ebony turn brown like that either.
S

No Stu just this one. To be clear it’s coloration, there isn’t any buildup

Is it rosewood turned blackened (moisture/mold), or RW stained ebony and rosewood showing underneath from wear?

My guess would be that the fretboard was dyed to make it blacker and you've worn it off.

I'm often wrong, though, which is why I don't enjoy casinos.
S

Always a possibility that a particular fretboard did not receive proper and consistant preassembly treatment. Left hand assumed right hand had finished his treatment or didn't wait long enough between wood treatments. All guesses on my part.

It's brown wood dyed black, is it really Ebony then? I've never seen much grain in Ebony before, usually just very very dark, like the black keys on a piano.

+1 on the wood not being ebony, but covered with some kind of dye. I've had an ebony board, wore divots on it, and it's black throughout ..

Ebony can be brown and have grain. These days only the good stuff gets the naturally jet black ebony. Lots of dyeing going on. I learned this when buying high end chess pieces.

GAD said:
Ebony can be brown and have grain.
Click to expand...

Yes, this! G&L has been using Macassar ebony since 1980. It's an Asian species and can be brown and streaky or jet black and everything in between. Some companies will dye it black, though G&L does not and the lighter pieces are often confused as being rosewood.
W

It was commonplace to dye streaky ebony in the old days -- a solid black fretboard was deemed to be more aesthetically attractive.

I think the latter is what's going on with your guitar, as the exposed areas aren't streaky at all, as ebony would be, but rather appear to be consistent in color and grain.

There's no longer a tendency to dye fretboards, as companies (like Taylor, and others) began letting the streaks show.

GAD said:
Ebony can be brown and have grain. These days only the good stuff gets the naturally jet black ebony. Lots of dyeing going on. I learned this when buying high end chess pieces.
Click to expand...

High end chess pieces? Wow, that's a study in it's self. We need to see pics, please.

Well, I guess it depends on your definition of "high end". There are some crazy expensive sets out there, but I wanted a nice one and of course that turned into an adventure. From the early days of my blogging (2010) when I couldn't decide what to write about: https://www.gad.net/Blog/2010/06/20/house-of-staunton-collector-series-luxury-chess-set/

All three of these pieces are ebony: 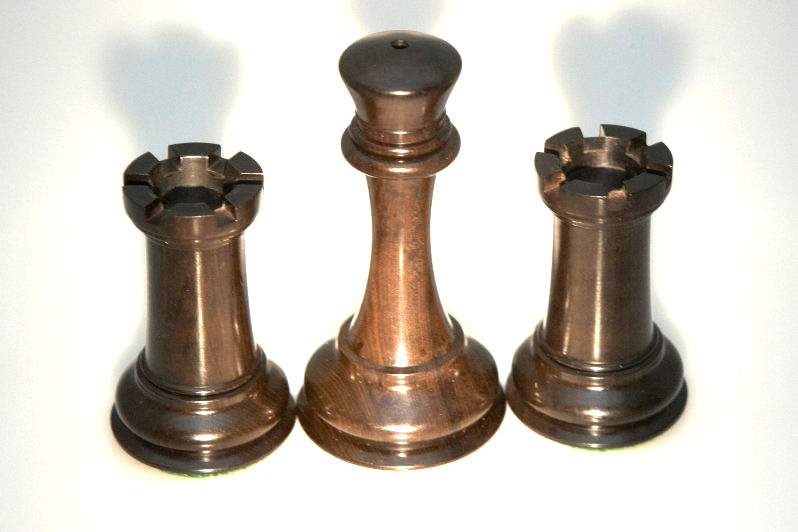 That's also when I discovered that all of their "high end" chess sets are mass-produced in India, have no real constancy between sets, and like most "luxury" goods these days are really nothing of the sort. In the end I still like the set, but I had to fight a bit to get what I paid for.

That's a long read, I'll save for later. The pieces look nicely polished.

Only 15% or even less of ebony is solid black. That's why Bob Taylor revolutionized the ebony harvesting in Africa, with them leaving so many trees cut down and just lying there rotting, because the guitar people only wanted solid black. But now there's more of a market for multicolored ebony and it's true some manufacturers dye their wood to make it more uniform. Looks to me like maybe some of the dye wore off your fretboard. It's probably ebony but not naturally solid black. Or like Glenn said, it's rosewood dyed to look like ebony, but I think it's ebony. I'd clean it really good with 0000 steel wool or that other stuff that people talk about (Gorgomyte or something?) and then use some Bore Oil to condition it and then not worry any more. If it really bothers you I'm sure you could have it re-dyed but I'd just leave it alone. I think it looks kinda fun. See, to ME, THIS is what mojo looks like!!

"Gorgomyte" raises it's ugly head again. I use it now, but still would like more information on it. It really does a good job on the frets and board.

I wound first give that fretboard a good clean with a bit of water and soap or as Tom proposed some 0000 steel wool. Let it dry for a good time afterwards and apply something like Music Nomad's F-One Fretboard Conditioner to the entire fretboard. The fretboard really looks dry to me.
Ralf
You must log in or register to reply here.
Share:
Facebook Twitter Reddit Pinterest Tumblr WhatsApp Email Link
Top