Who's got it, talk to me, how many Teles, what are they, projects, parts, Esquires?

There's just something about these things...

I've had a couple dozen easily but my special one I've had for over 10 years (that's like a hundred in guitar owner years ;-) is a '52 Reissue ButterScotch that was the last in a series of the same I've owned over the years. I've had one after another of these since they've been around used, same with the early Fullerton reissue Strats, had one after the other (still have an '84 Sunburst Strat, serial V00xxx), they were what was out there before the MIJ Strats/Teles of the late 80's, which everyone by now knows are pretty fantastic guitars also.

This particular one came off eBay, when all great guitars were sort of a dime a dozen, blatant side deals went on all the time...

I had picked it out because it was pretty incredibly naturally relic-ed, in the original case with COA from Bill Schultz (COA from CEO?), the extra bridge, the strap, dead nuts original, it was a 1992 (extremely good years for both Gibson and Fender guitars), which was (even though Fender hardly made a big deal of it) a 50 year anniversary for the Tele, and that's what I consider it, a 50 year anniversary Tele.

Seller (bad pics?) forgot to mention the neck was all it up in flame. A first for me, getting a flamey neck you didn't even know about... These days, they'd have 20 different angles of the flame, screaming "Custom Shop". Custom Shop was just everyday for these folks, who went on to become Fender's "Master Builders" when Fender decided to do a Custom Shop and sell $8000 strats...

And to boot, there was an extra "matte" guard with it, a bakelite guard. I put that on almost instantly, curled edges and all, looks amazing.

The problem was, and there's always a problem... was also that the seller forgot to mention (I didn't ask, in those days nobody cared) that this Tele was a chunky one, I mean, like a Les Paul chunky, weighing at 9lb 6oz, I never played it that much, the weight bugged me.

Until I decided to do something about it.

Out of the blue a non relic (rare) MJT 2 piece Butterscotch ash body weighing only 4lbs showed up on the bay, I snagged it and it went through the Polar Vortex to get here... never so glad to see a box. Swapped everything over, and I have a Tele that's under 7lbs. That's right, under 7lbs with that flamey ball bat neck. Neck weighs 1lb 8oz with tuners.


Real Tele freaks know the weight of every part of a Tele right down to the weight of the 3 saddle bridge vs a 6 saddle, there's .02 oz difference, the one with the three brass saddles is heavier. The brass vs steel controversy can go on for days, and I hear Brad Paisley likes to mix and match and use Steel under the low E and A strings for added bite over the brass of his other four saddles.

Then some "other" Tele body popped up on eBay, with really cool p'ups, it's in the mail. Super vintage Warmoth body with ancient Seymour Duncans in it, basically some of his first p'ups. So then I needed a neck, Rosewood this time, this one's going to have a White guard/Rosewood board, neck is in the mail (a neck as unique and cool as the body), and a set of tuners (Gotoh factory aged), and a decal, etc etc, if I needed it I scored it, on eBay. Rverb seems to have a dearth of certain things, cool tidbits or whatnot.

Super excited about this one, 6 saddle bridge, Alder body, oldest and coolest Warmoth body and guts I've seen on eBay in ages.

Been wanting a 60's Rosewood style Tele for a long time, among others, Tele Thinline, Tele Custom, Micawber clones (I've had two, why oh why did I sell them?) and don't forget, you should have a Tele with a Bigsby on it, and one with as Parsons B Bender, and if I had a lot of money, I'd have a '69 or so Ivory White Tele with Rosewood board, Big F Bigsby Trem, eye candy for miles...
Last edited: Mar 15, 2019

Guildedagain said:
Who's got it, talk to me, how many Teles, what are they, projects, parts, Esquires?
Click to expand...

An Esquire was used by Jeff Beck for the Yardbirds' "Shapes of Things" and by Mars Bonfire for "Born To Be Wild".
Just sayin'.
:friendly_wink:

My first Tele was a G&L ASAT. I also, like GAD, like the idea of the Tele, but, as good as the guitar was I just never connected with it. Too twangy, and the neck and the scale just weren’t comfortable for my hands.
Next up was the Guild (not) Roy Buchanan T-250. Belly relief cut, thin neck, it felt a whole lot better, but the long scale left a little to be desired (again, for my hands). It found a better home in Default’s hands.
Finally I found the Tele of my dreams, the Fender Jim Adkins model. It’s probably the most un-Tele Tele out there, and yet my first actually from Fender. It had its P90 pups replaced with Alnico V staple pups, and it’s short scale, with Gibson-esqe control panel and stop tailpiece. Based on the semi-hollow thinline version, it’s comfortable to play, and it’s twang it’s more subdued. It fits me and what I play. 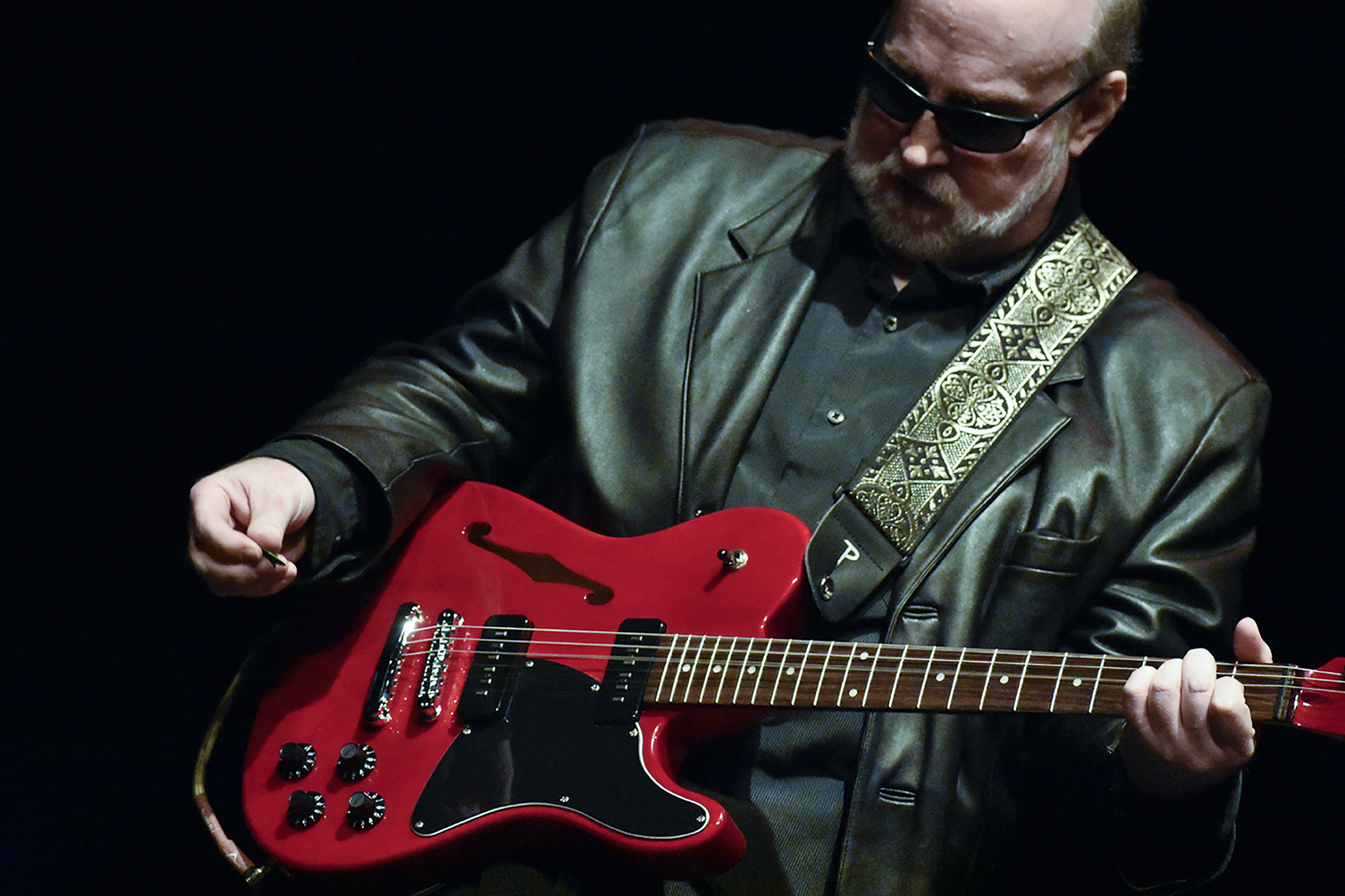 I love teles. I have a made in Japan 50's style tele with a neck I really love that I've had forever, and three homebrews (partscasters, some of which I finished in nitro) : a dark copper metallic low B-tuned baritone, a white blonde swamp ash one with two vintage Kay "Barney Kessel" pickups, and a very nice blonde one piece swamp ash one with two Lollar "50's" P90's. So not all of them are traditional teles, obviously. maple necks on all of them, btw.

GAD said:
I have a love/hate thing with teles. I love the way they look, and I love the way they sound, but I hate playing them. I think they're about the least ergonomic guitars ever made, and yet every few years I end up trying another one.
Click to expand...

Yeah, what GAD said. But I do love the looks of the Butterscotch finish. 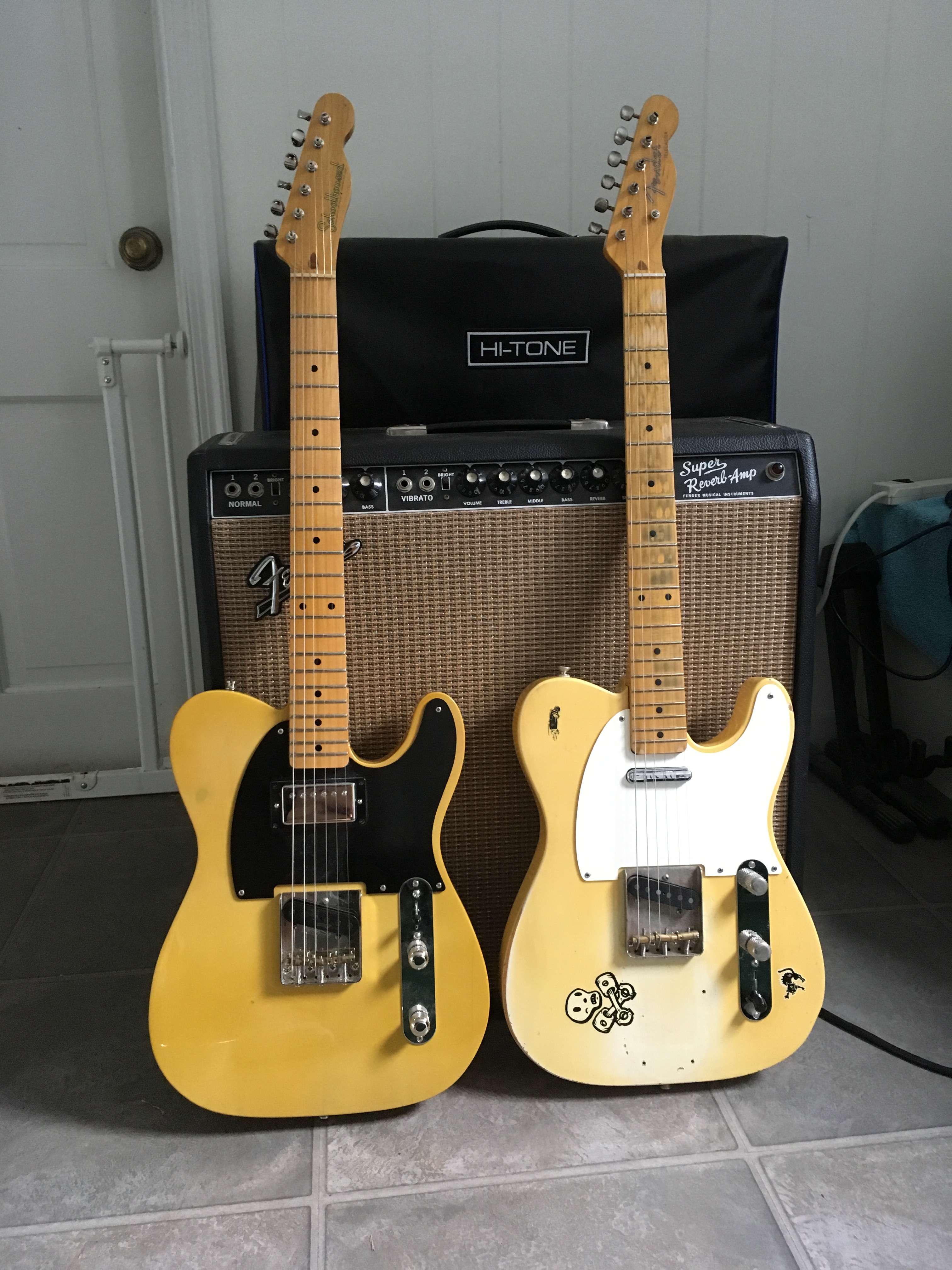 Here's two of my favorite "Teles". The one with the black guard is from Curt Wilson at Old School Lutherie in New Jersey. The body is built from 200+ year old fir that made the original rafters of the shop; it has a Warmoth neck and Duncan pickups.

The white guard is a partscaster I put together from a ca. '70 Fender body, MJT neck and Peter Florance Voodoo pickups.

Only solid body I ever bonded with was a Tele. Mid-60s. natural finish, RW board with a humbucker at the neck. Used it in a country band I was in, but it also had a great jazz sound. Loved the sound, but never really got comfortable with the body. Still, think about getting another one, but probably never have a need for one.

Some time of my favorite guitarists play teles; but they’re not for me. Like GAD, I try one every few years. I was just thinking today that I’m gonna sell the one I have now. If I ever came across a ‘magic’ one, I might change my mind.
P.S. I HATE the P/U switch.

One look at a black guard Tele, even with a PAF in the neck position, and to me it just screams "the" quintessential electric guitar.

I own a 2012 Custom Shop Telecaster Pro (Pro for prototype) in Nocaster Blonde. It got a very light swamp ash body and a custom bridge. Pickups are Twisted Tele pickups, both handwound by Abigail Ybarra! I like this Tele very much as it has even unamplified a nice acoustic sound for just playing it at the couch.

Is that the guitar? Is that a top loader?

Guildedagain said:
Is that a top loader?
Click to expand...

I don't have pictures at hand right now, so I took them below from Carter Vintage. The strings are through the body, like the normal Telecaster.
The bridge has no sidewalls, except at the bottom end.
Also you see the neckplate and the wood there are differently shaped, to allow better access to higher frets.

See, it’s the killer pics that suck me in. And the idea of a broadcaster with huge knurled knobs appeals to me like crazy.

I have an amp to restore. I’m not looking anymore.

Teles are my favorite solidbodies…pretty much the only solidbodies I played during the late '90s–2000s. I have an old blackguard (12/53 written on both neck & body, late '53 pots) that weighs a bit under 7 lbs. Pickups read 5.88 & 6.12KOhms respectively. The neck p'up is underwound for reasons unknown but sounds very clear & stringy as a result. The bridge pickup is raw & throaty…it can twang or roar depending on how I play. Selector switch wired "modern," original tone cap still in the control cavity but out of circuit ('70s era Orange Drop in circuit, original "mud" cap long gone). The guitar was gigged a lot by its original owner, and looks like it, but it's in terrific structural shape. Chunky neck, soft V profile.

Other Teles: a featherweight '78 Thinline with wonderful Seth Lover-designed Wide Range pickups; an early '96 Cunetto-built Relic Nocaster with Duncan pickups (9K with 43 gauge wire bridge p'up) and a neck that took ages to settle down; a black '83 Fender Japan Squier that sounds killer with the tone knob backed off a little; and a recent & terrific-sounding/playing custom shop Tele-Jazzmaster mashup, white with green guard, that I got at a good price 'cuz they didn't sell very well.

I also have an '86 G&L Broadcaster that, while Tele-shaped with two pickups, is an instrument unto itself. Three-piece soft maple body, slim neck with ebony fretboard, fab sounding Magnetic Field Design pickups. Acoustically it responds more like a particularly lively Les Paul than a Tele. Plugged in it delivers big & solid low end, beefier-than-Tele mids and ringy/twangy high end. These Broadcasters are generally on the heavy side but mine isn't too bad: right around 8 lbs.

Once I finally get around to choosing an alternative to Photob****t for hosting, I'll post some pics. (There's at least one pic here of the '53 that might still be visible.)

Quantum Strummer said:
Once I finally get around to choosing an alternative to Photob****t for hosting, I'll post some pics. (There's at least one pic here of the '53 that might still be visible.)

You can use PB for free again, it’ll just have a watermark in the pic when you share on the forums.

AcornHouse said:
You can use PB for free again, it’ll just have a watermark in the pic when you share on the forums.
Click to expand...

Yup. I do want to settle on a pic host that doesn't use watermarks, though.

Last time I tried I was unable to find my post containing the '53 pic(s) via Advanced Search.

Quantum Strummer said:
Yup. I do want to settle on a pic host that doesn't use watermarks, though.

Last time I tried I was unable to find my post containing the '53 pic(s) via Advanced Search.

Quantum Strummer said:
Yup. I do want to settle on a pic host that doesn't use watermarks, though.

In the FAQ I outlined how to use Wordpress for hosting for free, with no watermarks.