This review is for a new Guild F-2512e 12-string. I have significant experience playing 12 string electric and acoustics, but with no prior experience of playing Guilds. I'll do my best to be objective. I won't be able to compare it with other Guilds, but only against my subjective experience. So thank you in advance for your grace in this regard.

First of all, I got a smoking deal on this guitar from Sweetwater. It was slightly damaged (headstock chip), so they gave it to me for $329 out the door. They advertised that a case was included, but it arrived without any case, and through some magic in their honor-system, they ended up shipping me a $150 Guild Humidicase at no cost. They earned my business. Amazing!

My purpose for getting the guitar was because I needed a second guitar to keep in DADGAD tuning. Most people will attest that it is not practical to retune 6 of the 12 strings back and forth between DADGAD and Standard. Perfect excuse for extra guitar!

The guitar is simple, yet beautiful, cosmetically flawless, and well-made. One thing I noticed was how light it felt, for the size. But it does not feel "cheap". It's always a joy to open the Guild case and pull this thing out. The natural blond color really stands out, when viewed in person. The action was a little high for my liking, so I had a luthier make some adjustments to the truss. He said the Nut is cut pretty low, for what it's worth. The Bridge is a pretty fat/tall piece of wood, but he cranked the truss to maximum, and the strings got pretty low. Most likely you would not need to sand the bridge unless you need a very-very low action. That said, I actually had him set the action back up a little higher, because the tone was less "full' when the action was very low-- it had become noticeably less bassy, and much more trebly, but not a full treble-- more of a cymbal-like sizzle that was not pleasing to my ears. This is relative to playing methods/styles, so ymmv. But as always, there's a tonal compromise with action and string tension to consider, and I've noticed in the past that this compromise can be exaggerated on 12 strings. So with the action back up, the tone was closer to how it sounded before, but easier to play up the neck than with the original action. Perhaps later I will try a heavier gauge string set, and set the action lower. I should add that when the luthier picked it up, the first thing he said was that it was very light for a Guild. He checked with a mirror and said the bracing was alot lighter than higher-end guilds. He said the Guilds he knows have "Very strong, I mean very strong..." bracing. That said, I have no doubt the bracing is sufficient for the lighter body wood of this guitar. He said the glue on the braces looked good. I remarked on the slightly raised top, under the bridge, which he confirmed is by-design, and not bowing from string tension. We both noticed the bridge was slightly tilted forward, but was firmly glued to the top, so this is probably no issue at all, and perhaps by design.

The tuners do their job... while they are not Grovers, I have not had any tuning difficulties. When holding the guitar, the tuners do not give the impression of being very heavy, as the headstock does not feel heavy in the hand, like some 12s. As for keeping it in tune, I had to make a few adjustments over the the next days, but once the strings get locked down, they pretty much stay where they are. Some days I don't have to tune it at all. I am doing mainly finger style, so I'm less likely to knock tuning out, as with heavy strumming. I have not gigged out with it, so I have not experienced whether the guitar resists moisture/temperature changes well. I trust that it will do just fine.

As for the d'addario coated 80/20 EXP light strings, which come installed... they seem fine with this guitar. In the past I have not been drawn to coated strings, but I have no basis to say what other strings would sound like on this guitar until I try them. I will inevitably check to see what non-coated strings will do-- perhaps uncoated bronze or mayyybe phosphor bronze.

As mentioned, I play this guitar in DADGAD, and it sounds amazing this way. The bass is FAT, and you can feel the sound-box resonating against your chest-- Something I am not used to from playing smaller body 12's. The guitar is warm, and gets some nice upper harmonics, but it's not "Tears go by" either. The sustain is good, but it does not sustain as much as some 12's I have played. The volume is rather loud while playing, and while there is good sustain, the volume of the sustain drops off a bit more quickly than I am used to after sounding a chord or single notes. When I tuned this baby up to standard, the bass was obviously less pronounced but still firm. The sound of this guitar is decent in Standard, but for me it really opens up in DADGAD. In general, what I've noticed about the tone of this guitar (in DADGAD), is that there are various discrete dynamics that come out: 1.) The general bass resonance which I mentioned, 2.) a sort of percussive striking sound when I pluck the strings... hard to describe, but I'd say it's a distinct bass/low-mids percussion (almost like an echo) that accompanies each strike of a note. Again, this affect is more pronounced in DADGAD than in standard, but still present. 3.) Some decent singing highs. I would not say the singing is gloriously rich, at least for my style of playing, but it does sing and sparkle when I do it right. Perhaps some touches of glory here and there. And I'm not going to say you can't make it sing more than me. I don't use a pick, so maybe that would add some sparks.

The pickup, is an unremarkable Piezo, with some quack. I tried plugging it into an LR Baggs Para Acoustic DI (with on-board EQ), and out through a Roland AC-60 acoustic amp. No matter how hard I tried, I never was able to get the EQ set to a satisfactory tone on this rig. Some people have said it sounds great, but I'm not convinced. I will personally avoid using it. Your mileage may vary, but I bought this guitar with the intention of using a microphone for live and recording, so I did not have my hopes up about the piezo. For the cost, I can't complain, especially with the deal I got. I mic'd it up with a 57 through the same amp, and it sounds pretty darn good like that. This is a personal preference, but if I could magically make the pickup disappear, I would probably go for it, just to see if the guitar's resonance would find benefit.

The inclusion of the bone nut and saddle is a nice and unexpected feature for a $500 street-value guitar.

Overall, a great guitar for the price I got, but also a good deal if you grab one with a 15% coupon code on GC or MF, etc. I'm not confident whether you could find a better 12'er in this price range. It is a bit of a rocker, and previous adjectives like "cannon" are warranted.
Last edited: Aug 21, 2019

Nice review. I bought mine new about a year ago. I feel it has a trebly sound to it. I bought new strings but have not had the time to try them yet. My over all opinion is its a great 12 string for the price.

ezstrummer said:
Nice review. I bought mine new about a year ago. I feel it has a trebly sound to it. I bought new strings but have not had the time to try them yet. My over all opinion is its a great 12 string for the price.
Click to expand...

I just bought the new Deluxe of this same model and I couldn't be happier with the sound. It is exactly what I wanted in a 12 string. I recommend it highly.. 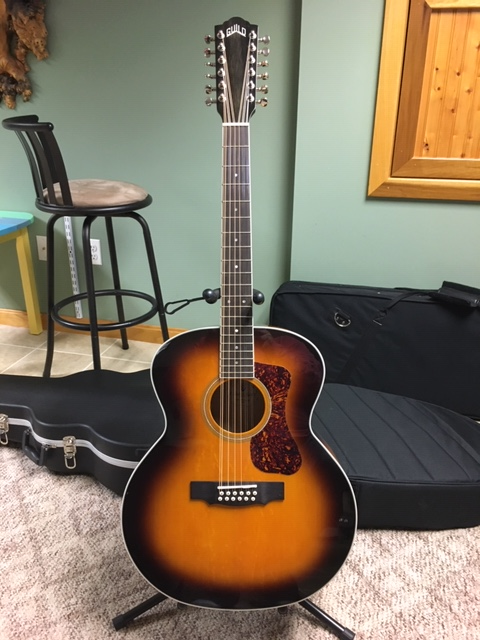 Excellent review Ardor13 ! Congtrats. I had one for a brief period but had to sell it soon because of shoulder pain from arthritis. The jumbos are just too big for me these days. No construction or playability issues, and overall it is a very good value for a new 12 string.