An acquaintance of mine sent me photos of a guitar he has owned for a few years. He asked me what guitar it is. I ask for your help. 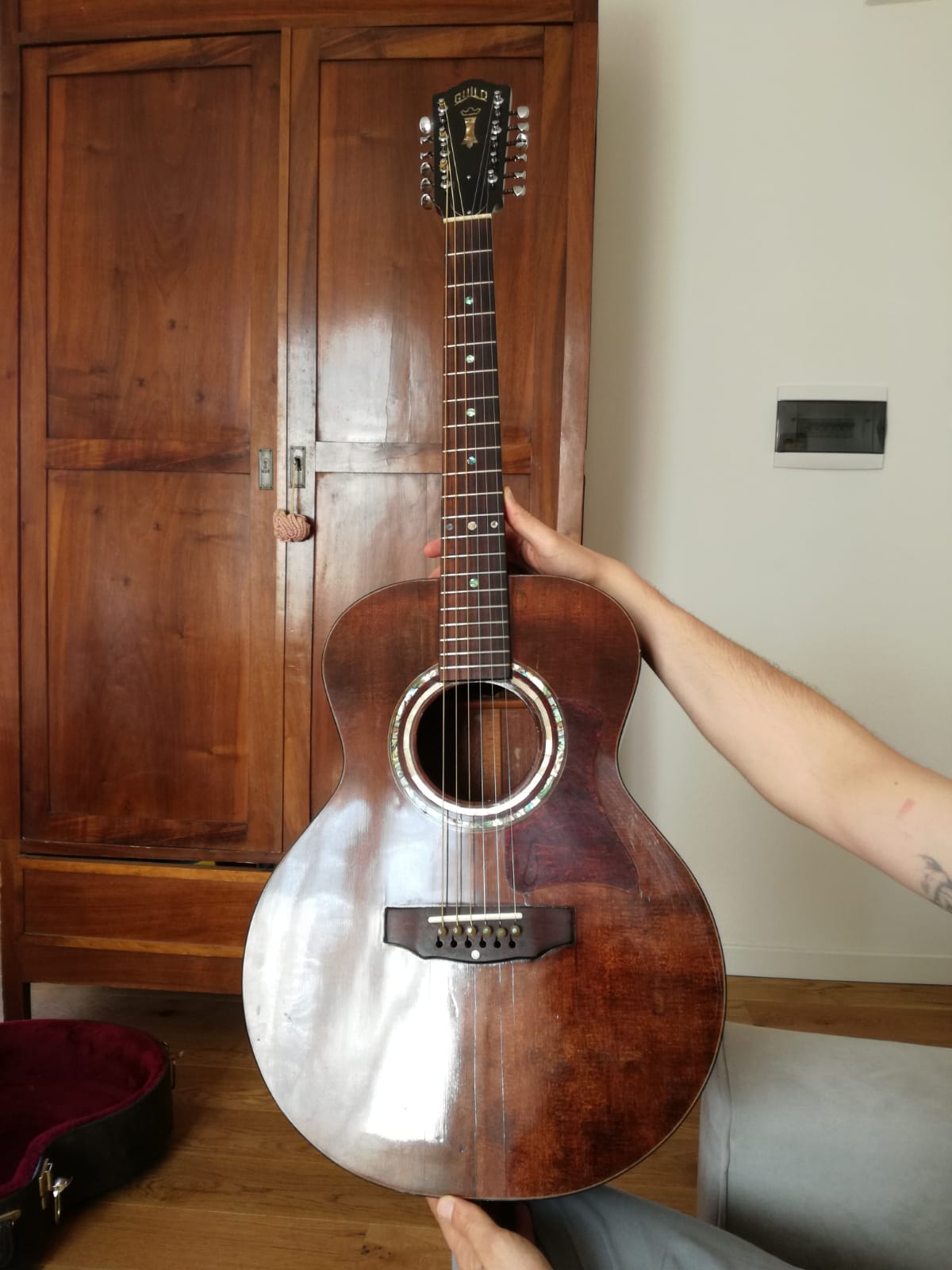 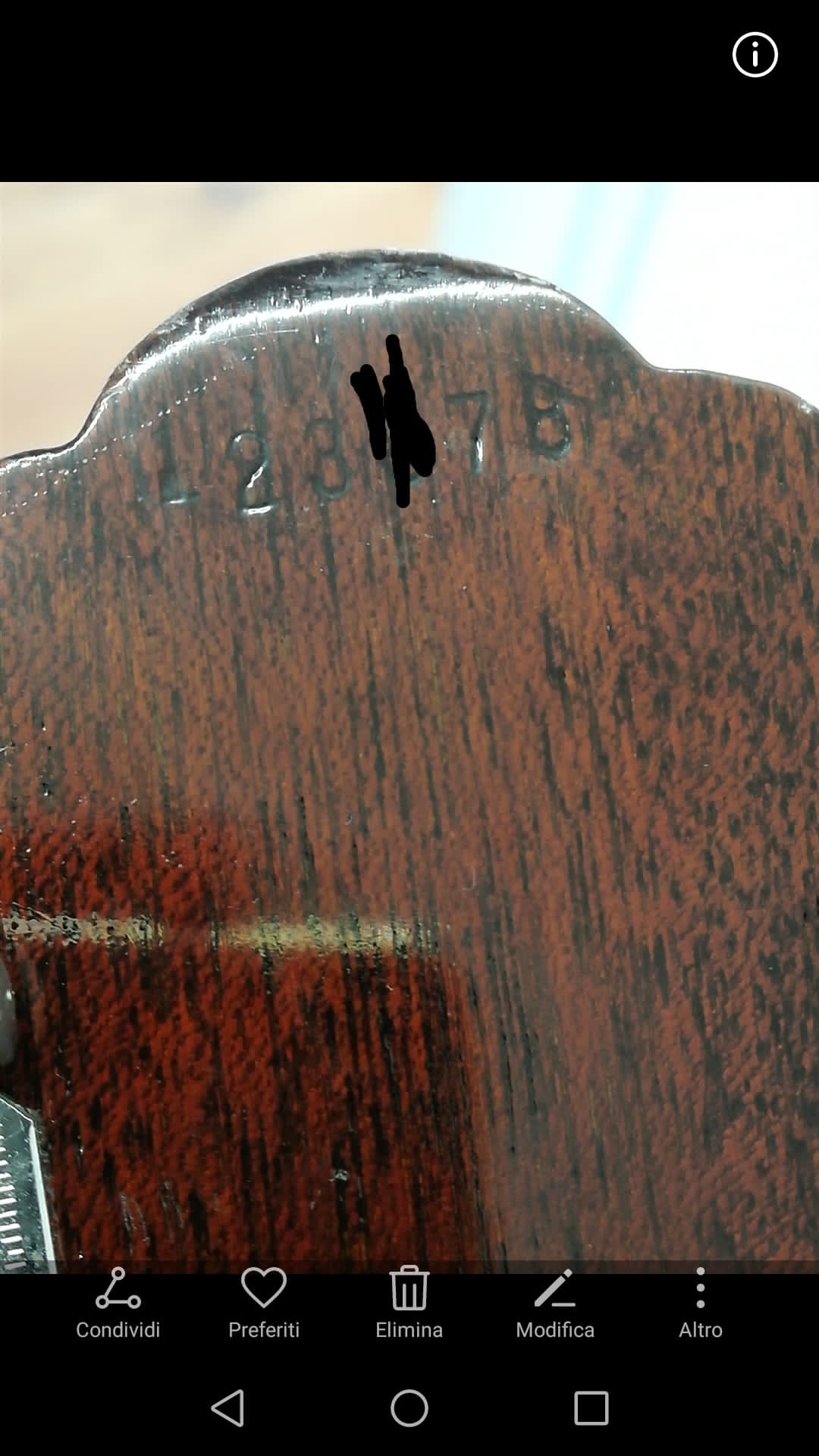 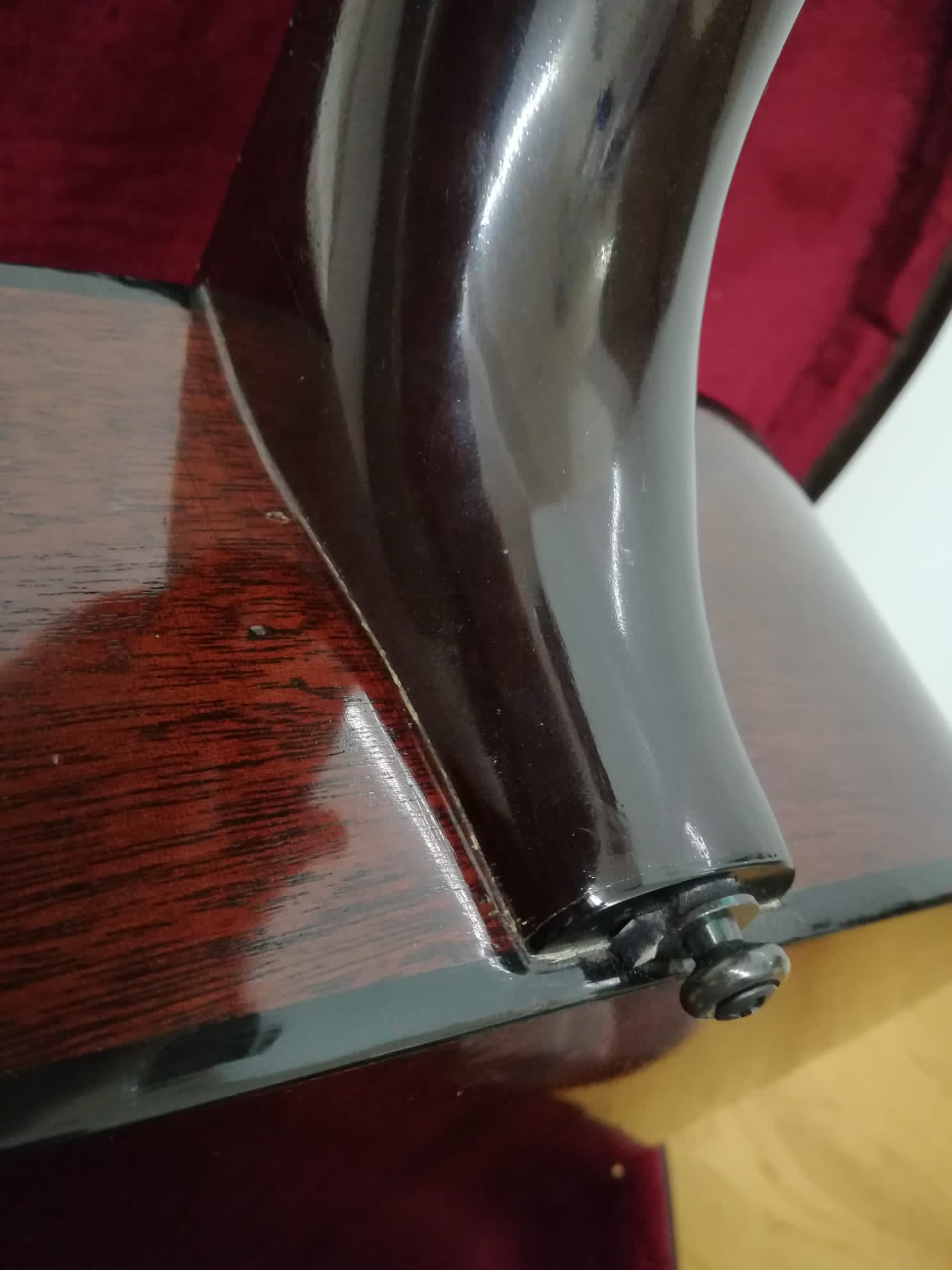 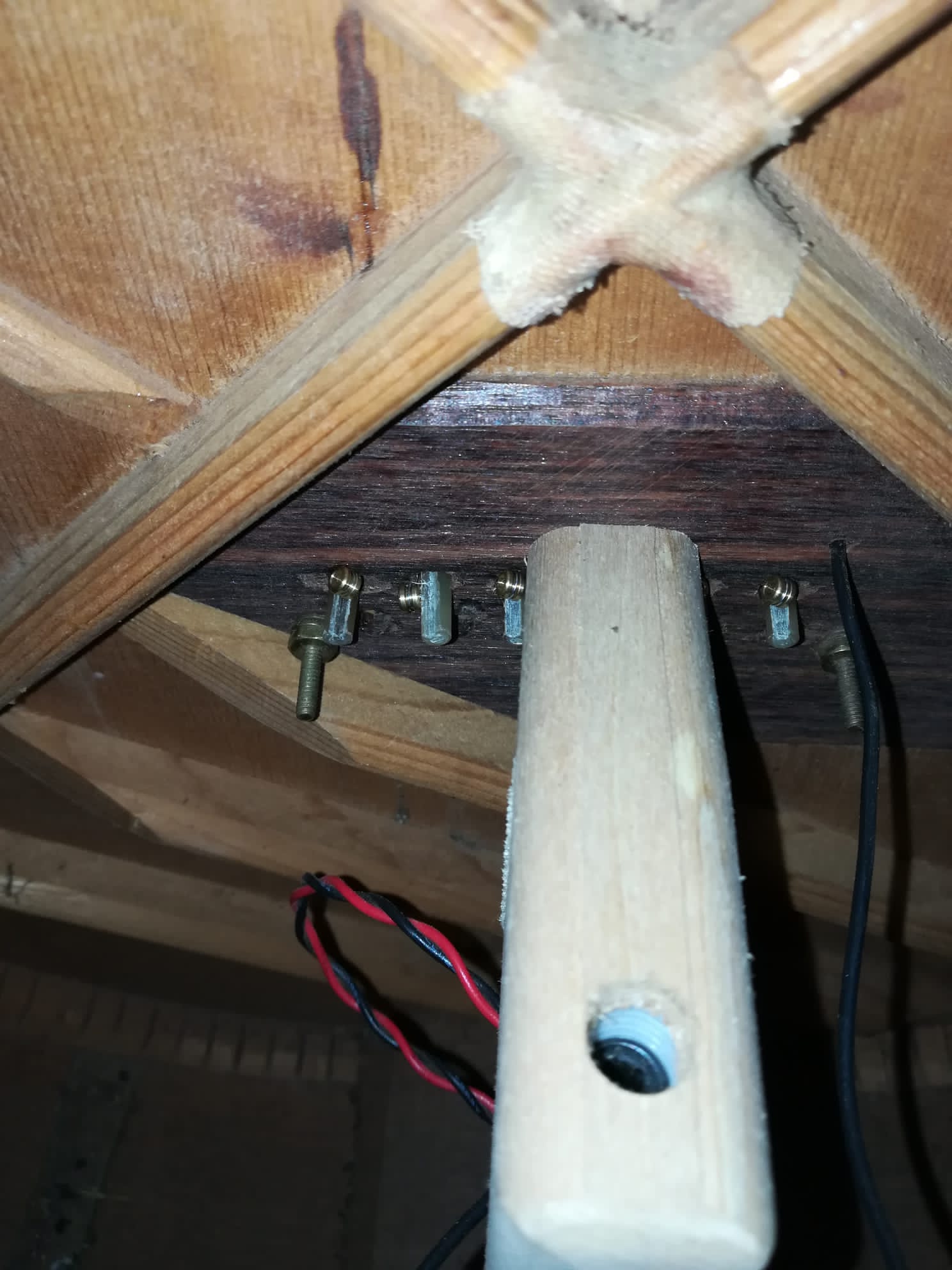 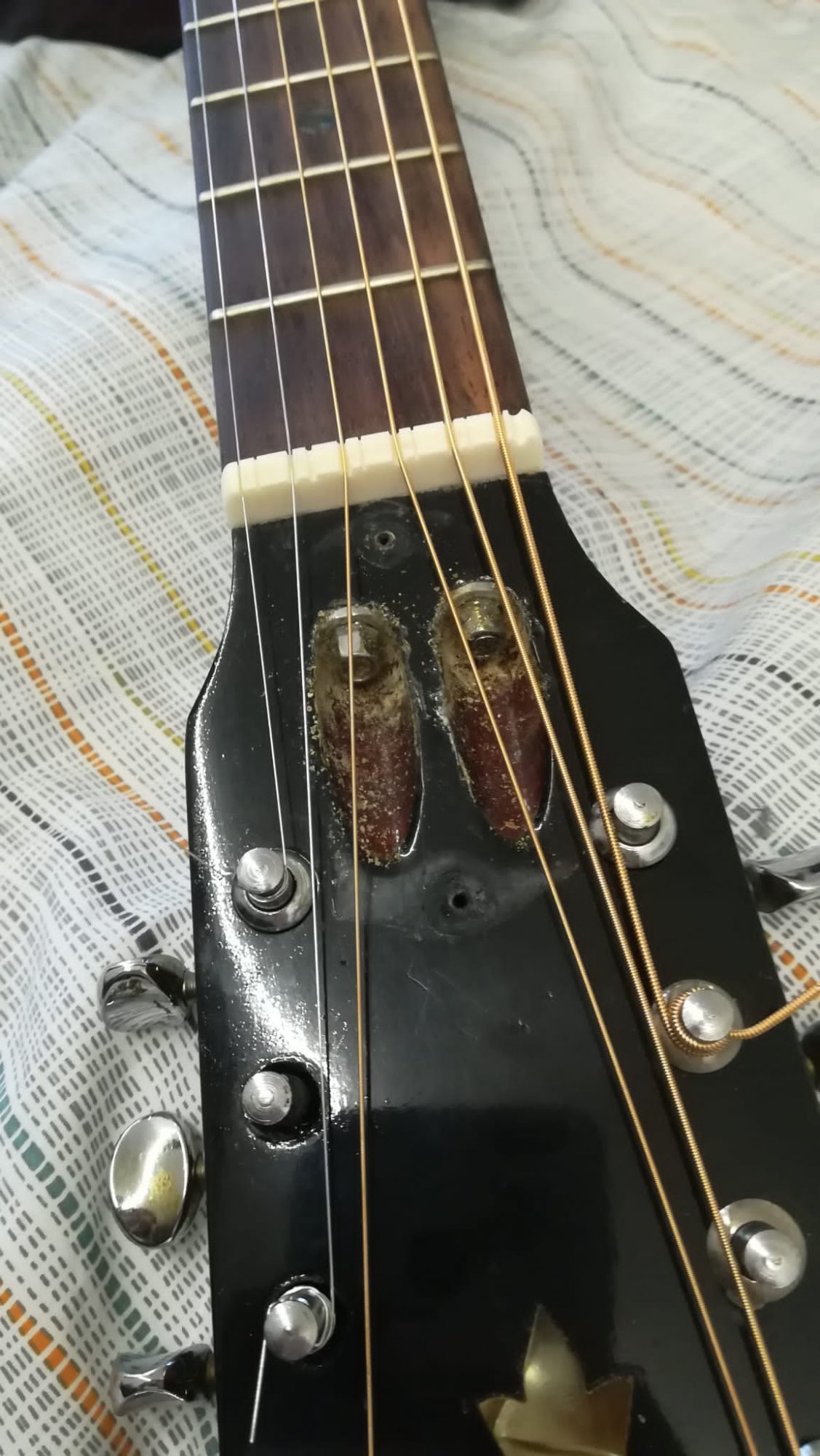 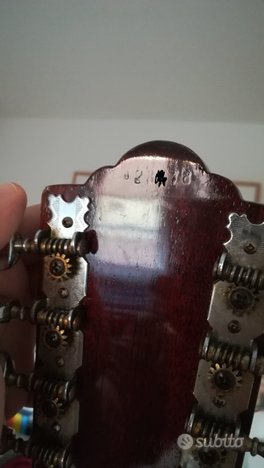 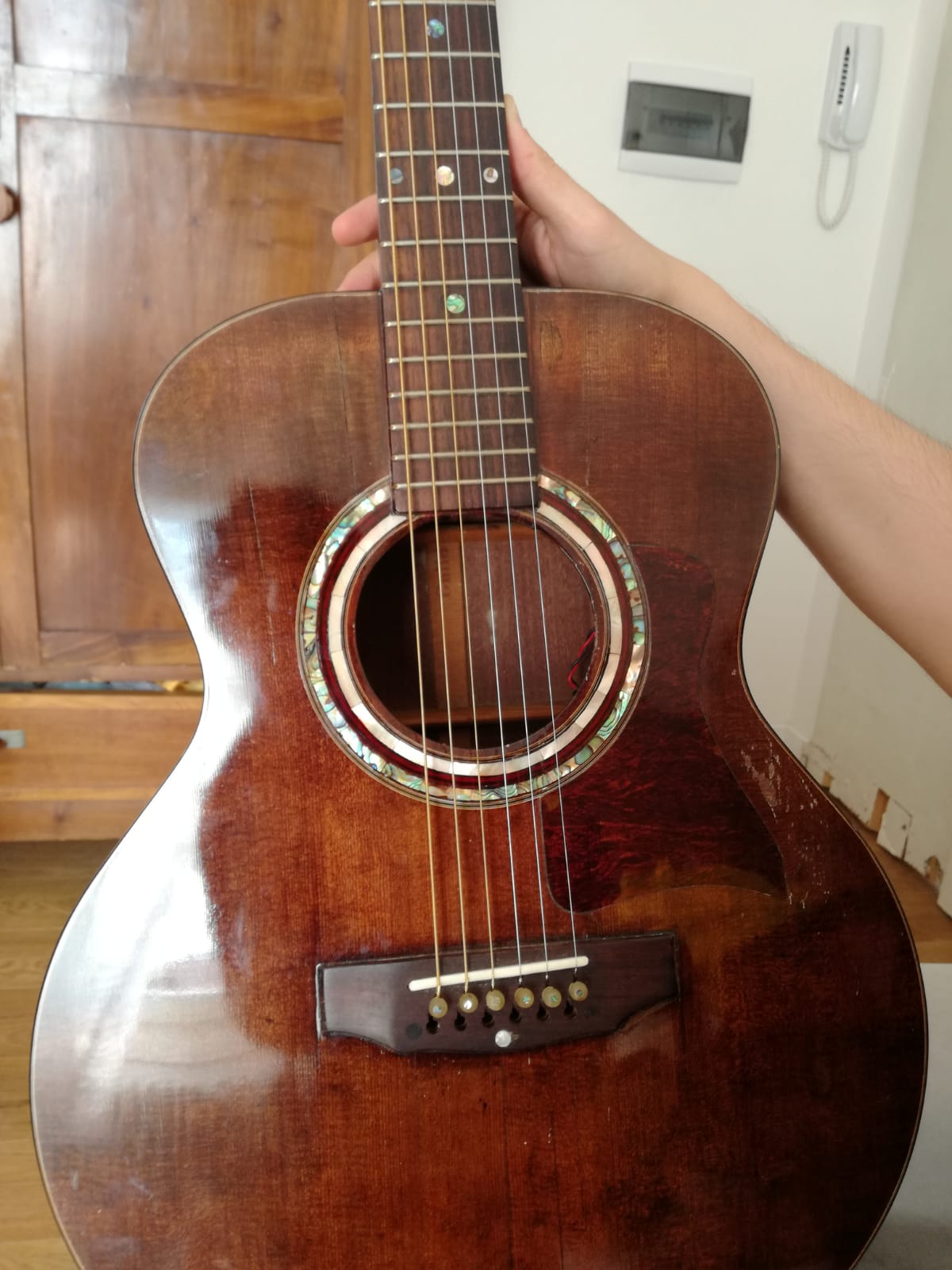 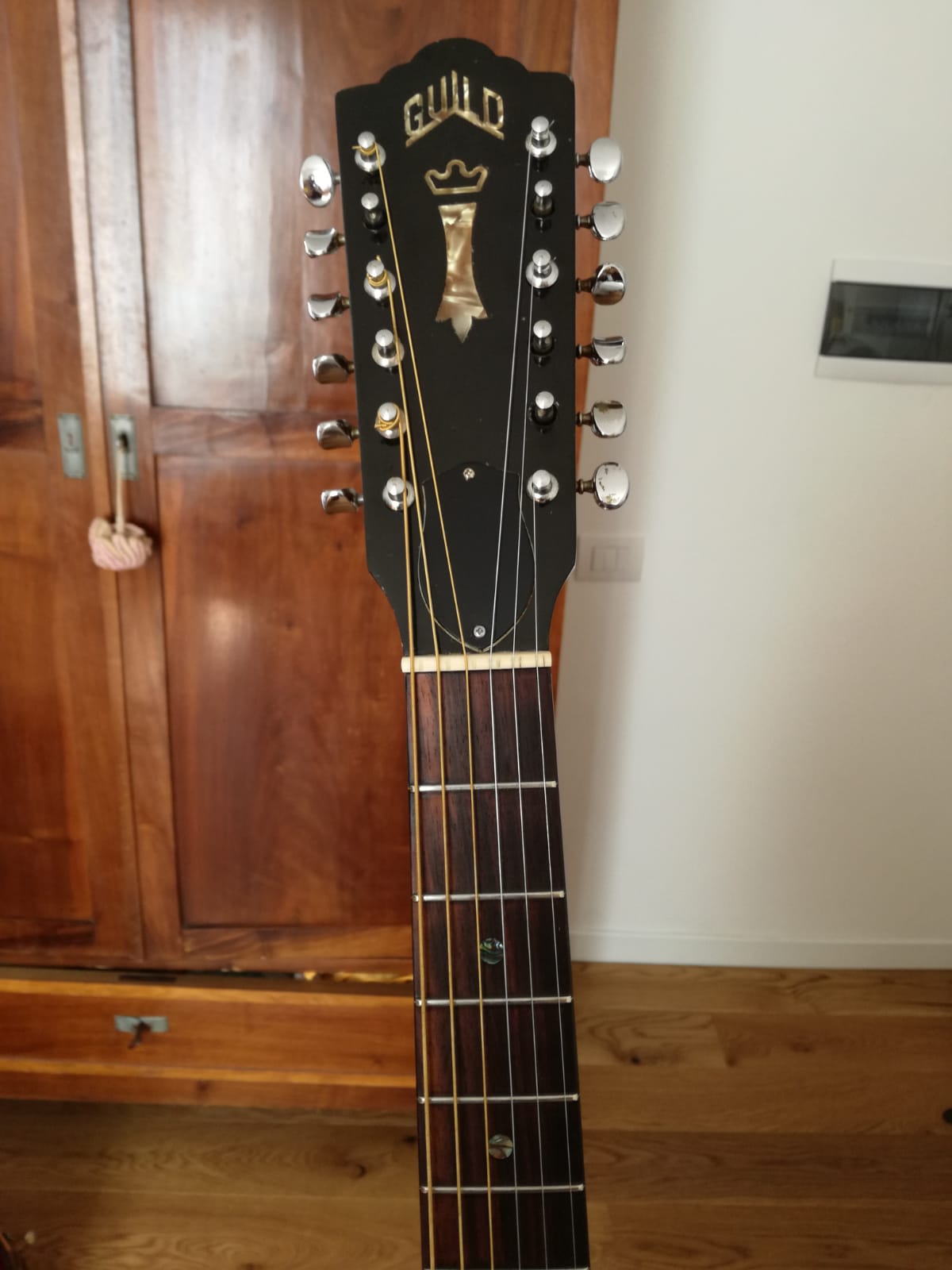 could be. But isn't the rosette strange? And the bridge is also strange.

The whole top is strange. Serial # is from 1975, but this guitar seems to have been entirely re-topped.

Some serious modifications and it does have a Bridge Doctor installed. It's currently set up and used as a six string so that's gonna make the string spacing a little wider than normal probably. Someone was practicing their inlay techniques on this one. Much easier to do before the guitar is put together and it's rather amateurish. If you look how deep the adjustment nut is on the bridge doctor, it was either cut to the wrong length or that things been cranked on quite a bit. It's a project guitar (meaning someone else's project).
Last edited: May 17, 2020

Poor thing has really been through an amateurish ringer.

Dual truss rods make it the neck a Guild, right? Did I miss the memo that said some other manufacturer used dual truss rods (ass opposed to a dual action truss rod)?

I see that as a 6-digit serial number starting with 128... making it a '75. The dot fret markers suggest at least an F212. But wait, those are even wrong - the originals weren't abalone.

fronobulax said:
Dual truss rods make it the neck a Guild, right? Did I miss the memo that said some other manufacturer used dual truss rods (ass opposed to a dual action truss rod)?
Click to expand...

Believe he meant to say as as in -- as opposed

When my wife's Aunt died, her obit and funeral program stated that "Virginia assed away on Mar 12..." Lots of snickering at the funeral when people read the program.

Apparently, frono's self-learning spell correction software knows more about him than he might admit.

Stuball48 said:
Believe he meant to say as as in -- as opposed
Click to expand...

Oh I know full well what he meant.... i'm just tired and bored. Not stupid, although some might argue.

While I would love to take credit for pushing the envelope it was just a typo. My spelling checker obviously allowed it - I have written about Balaam so there were examples to learn from - and I have some vision issues at the moment and reading is difficult. So I missed it in proofreading. Yeah, that's the story I can stick with.

The owner claims that the guitar has been customized in Guild. Do you think it's plausible?

Badger said:
The owner claims that the guitar has been customized in Guild. Do you think it's plausible?
Click to expand... 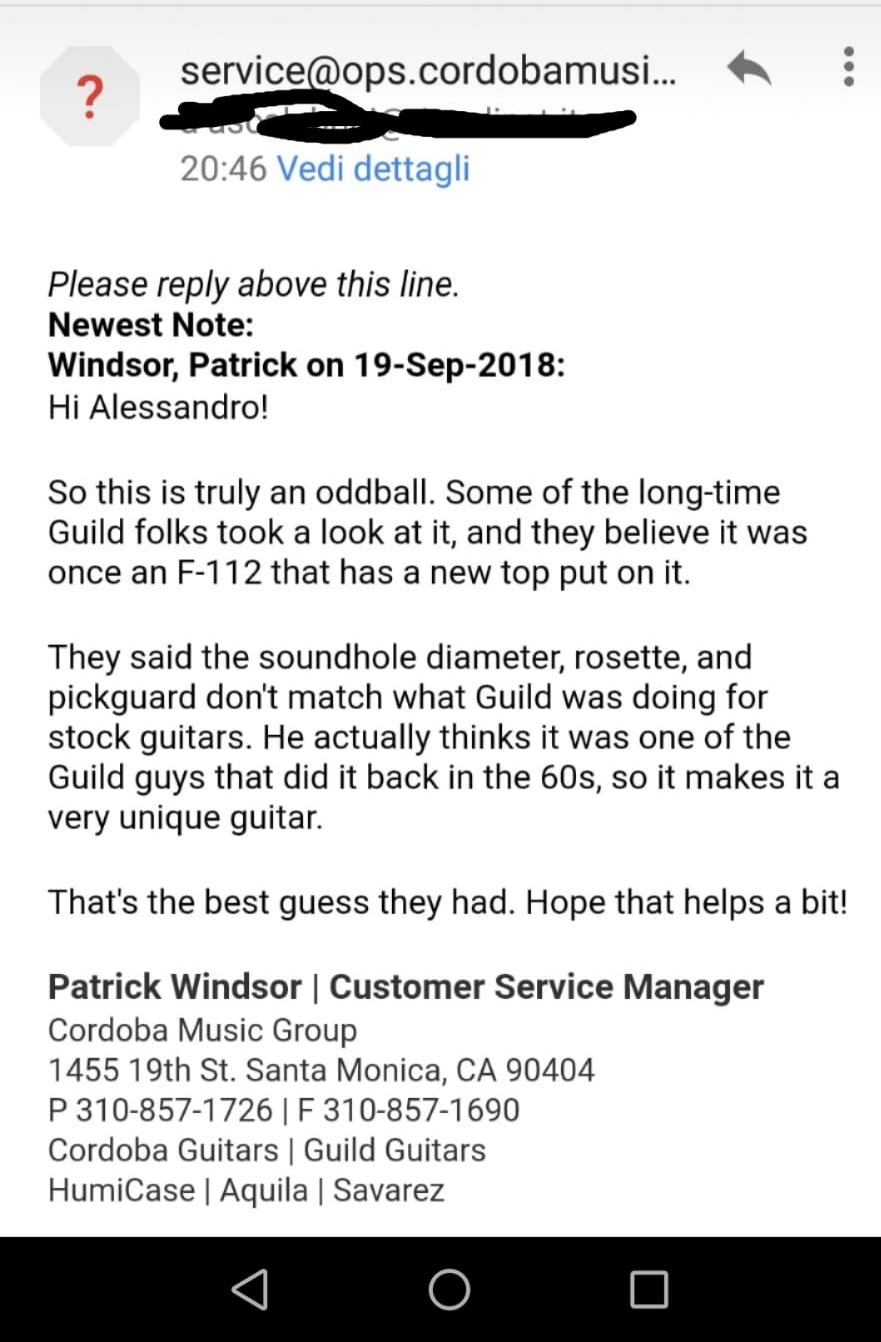 As bobouz has suggested above, I'm like 100% sure that's not the case. Someone has done some amateurish modifications to the guitar. The top looks stained as if to match the mahogany of the rest of it. Also that's a Taylor pickguard if I'm not mistaken, which could've come on the top and he just retopped the guitar. Without having the actual guitar in one's hands it's nearly impossible to tell what's been done. I don't know of any factory Guild was in that would've allowed work like that to go out. And remember that Cordoba Music Group now owns Guild but when it comes to Guild history you've got more knowledge here on this forum than probably any other source. The inlay around the rosette is the most telling thing of all. This was not done by a professional and I've cropped the photo and enlarged that portion. In my opinion it's the original top for that guitar (Sitka spruce) but you can see the inlay work is done poorly. One ring of mother of pearl and one of abalone? No one does that. and then added a Taylor pickguard to go around it. Guild for sure isn't doing that! 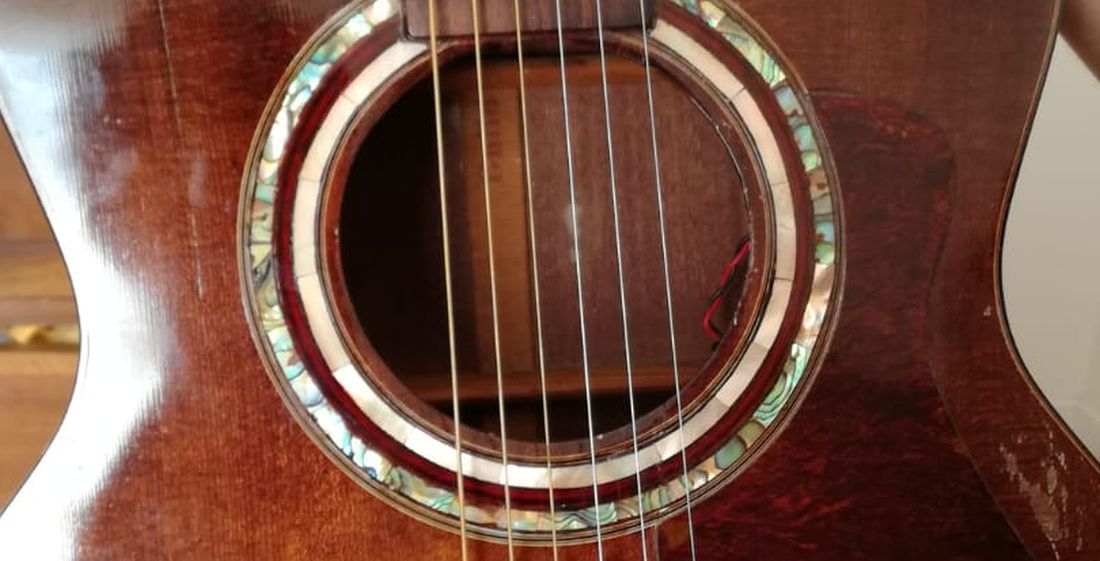 I think what you have is an old Guild F-112 as Kurt said, that's been heavily modified by its owner, who also added the abalone dot fret markers. In addition to the JBL Bridge Doctor someone has used some type of nuts and bolts to help keep the bridge in place. I can't see how it's done on the top but you can see the screw with the nuts on the inside shot. On the one shot of the top when you make it really big you can see where the holes have been plugged with wood to hide the screw heads. It originally came from Guild but that's where it's association with Guild ended. That's all I can think to tell you.
Last edited: May 18, 2020
You must log in or register to reply here.
Share:
Facebook Twitter Reddit Pinterest Tumblr WhatsApp Email Link
Top