Ever wonder if Guild made something that I didn’t rave about back in the Westerly days? Ever wonder if they decided to put their good name on some import crap merchandise long before the Newark Street line was even an idea? Ever wonder if an amp this small can sound good?Wonder no more as I take you on a in-depth inebriated rant review of one of Guilds most adorable little products, the Model Four amp. Most of my reviews take basically a week of time due to research, photos, analysis, and editing. This one was written over the span of about an hour at 2am the other day after a couple of delightfully strong cocktails, so it may not live up to my normal journalistic standards.

That was different - I liked the "positive attitude" from start . . .

But this opens new horizons for you. As we know because of your Thunderstar amp - we know you should be able to beef the poor little thing up and then tell us how good/tolerable it got.

I'll PM you about corrections but I would like to suggest that maybe your example may not be functioning correctly. I've been through a few of these (it took a while to get a "mint" set), and most don't seem work correctly. I believe the tone controls do affect the sound on my Model Four. Just for your edification, the Model Seven does not have reverb because, (get this), it's meant for bass!

I do know who made these for Guild as one of my samples has the original manufacturers back plate on it. I forget who it is but I'll try to remember to look it up and let you know.

Thanks for the link and the shout out! It was a fun read! (It probably would have been even better with a slice of pizza and a stiff drink!)
Last edited: Mar 19, 2019

That was fun. Thank you.

One look and you can tell it's a quality amp.

It also looks a lot like a vintage Boogie from the time period, I wonder who copied who...

Even dead, it still looks better than anything Line 6 ever made.

When I was starting out on the electric, people considered all Japan stuff to be crap, and they used to gouge the Made in Japan decal from the back of the Strats and Teles that had it on there, even though you could get one for only $300. Somehow scraping the Japan sticker off made people feel better...

Many have since then realized that Japan stuff was actually pretty good, some highly desirable. Me, I'd have the little Model 4 in a heartbeat. I like small amps, old stuff, novelty items, and old Guild stuff., so it's ticks all the boxes, and then some.

I really like the Rocking 7th soundclip, the amp is very transparent, guitar tones comes through very well. I personally never ever use any kind of built in drive in an amp. I like a good clean sound, and I use various pedals for whatever I need. These days, maybe just reverb. Also, to the sensitive ear like mine, these old analog circuits sound infinitely better than cheesy sounding digital effects. They sound warmer, being the usually the accepted term.

One of the handsomest small amps I've seen, next to an old cane grill Boogie MkI ;-)

Nicely done! I wish I could write well at 2 a.m. while drinking...

I remember those. Back then, I wanted a Mesa Boogie MK1 more than anything. That was THE amp of the time, but they were crazy expensive; if I remember, about $1200 ( I sent away for a catalogue); an unobtainable amount of cash when you make $4.50 an hour. The Guild amps caught my eye in Guitar Player, they LOOKED like a Boogie; and I knew the Guild name as a major player. I never saw one in person, but I sure remember thinking those might be the ticket...
Fun review, I’m going to read it again after I have a cocktail or two.

I'd be on the hunt for one, except I already have too many amps, never turn them on... It's probably destroying them?

Although... trying to justify looking, wouldn't it be a cool amp for a workbench?

Legend amps, anyone? They, visually at least, were Mesaish.

Maybe I should get a Model Five and see if it's any better: https://www.ebay.com/itm/Guild-Model-Five-Amp-circa-1983-with-Boost-Normal-push-button-volume-control/223454103842

That would be best as a YouTube channel. :very_drunk:

Edit: Since the post had command that looked like someone had been using copy/paste to test a mail server and the test had what looked like a real AT&T cell number, I'm guessing that was a "now which buffer am I pasting from?" error and edited it out on the off chance that the number did not need to be revealed and I needed a really amusing(?) run on sentence.
Last edited by a moderator: Mar 20, 2019

I see that Model Five has a Boost/Normal Pushbutton Control. I'd love to read a review as to how that works!

GAD said:
I like it! Sort of like Drunk History but without any semblance of real production value.

Edit: Since the post had command that looked like someone had been using copy/paste to test a mail server and the test had what looked like a real AT&T cell number, I'm guessing that was a "now which buffer am I pasting from?" error and edited it out on the off chance that the number did not need to be revealed and I needed a really amusing(?) run on sentence.
Click to expand...

I've discovered the source for these Guild model four-seven amps and updated my review accordingly: https://www.gad.net/Blog/2019/03/19/guild-model-4-amp/

If you don't want to click, they are actually Aria Birdie amps from 1980ish. This page from the Aria Pro II catalog from 1980 shows the MX60 as the same amp as the Guild Model FOUR. 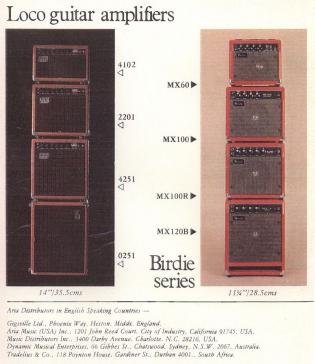