Hi, Iam new to the site. I just picked up my first Guild. It was on craigslist and i always wanted one so what the heck. Its a 1974 the serial is 1006xx. My question is, is it uncommon to have a 74 D25 with the arched back and a mahogany top? Also it has the late 60's starfire/slim jim tuners. I took the tuners off to see if there where any other holes drilled but there was not, seems they are the only ones that was ever on there. Did you ever see that on a D25?

Mahogany-topped arched back D-25s were made in 1973 and 1974, and you do occasionally see the all-mahogany D-25s from 1974 show for sale. However, many "new" old Guild owners mistake the stained spruce top of the D-25M for mahogany.

If you post a pic... many here could opine whether or not it is stained spruce or mahogany.

Hey John, as Dave has stated, D25's came in all different variations over the years. And sometimes they even put an M in the model name, but it could just as easily mean "Mahogany Stain" over a spruce top. Photos will help, and a photo of the label if you can. Welcome to LTG!!
J

Thank you guys. For some reason i thought that after 1972 and the end of the flat back they only used spruce tops stained in mahogany or cherry on the arched back. I will try to get some pics up.
J 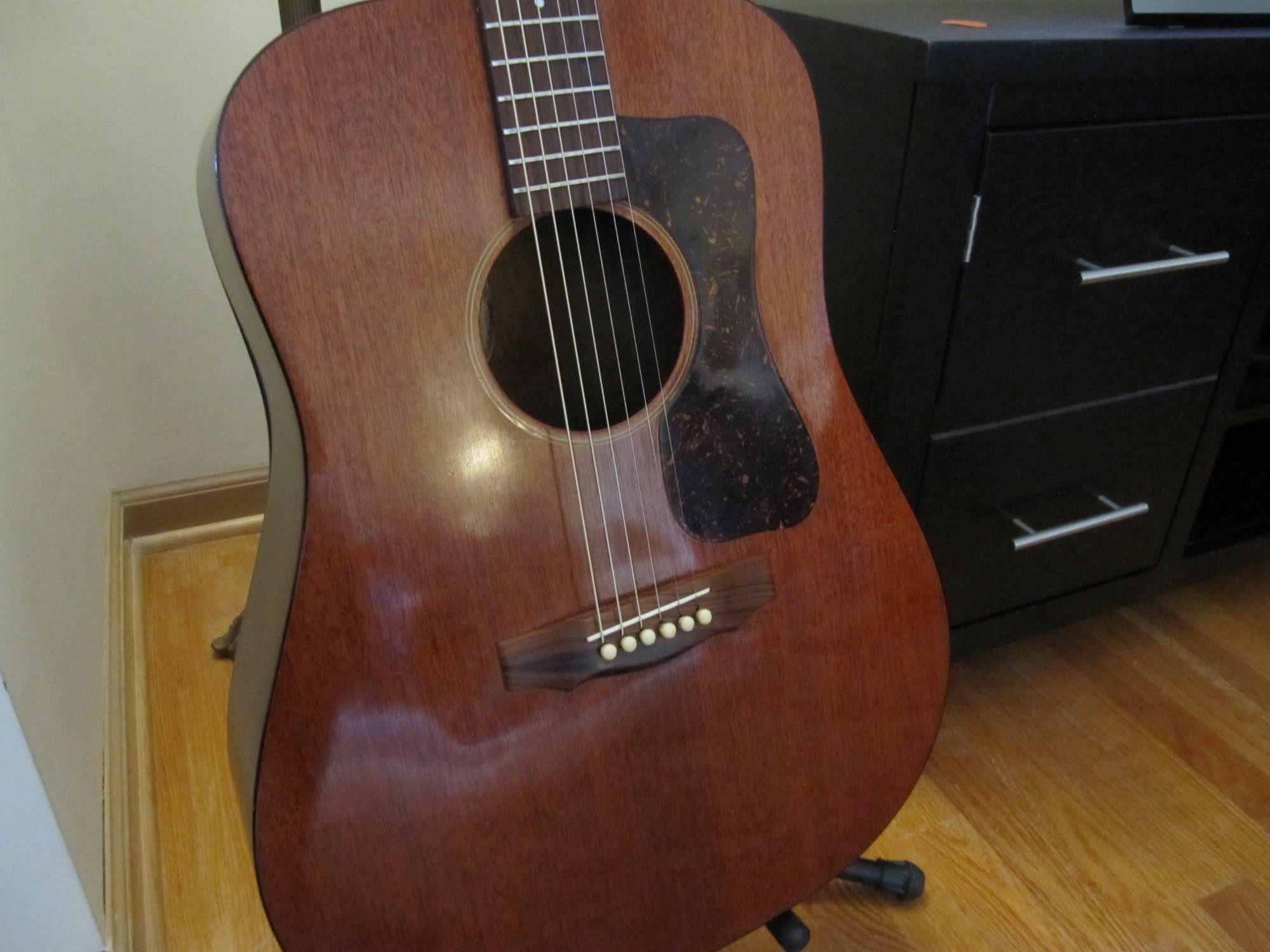 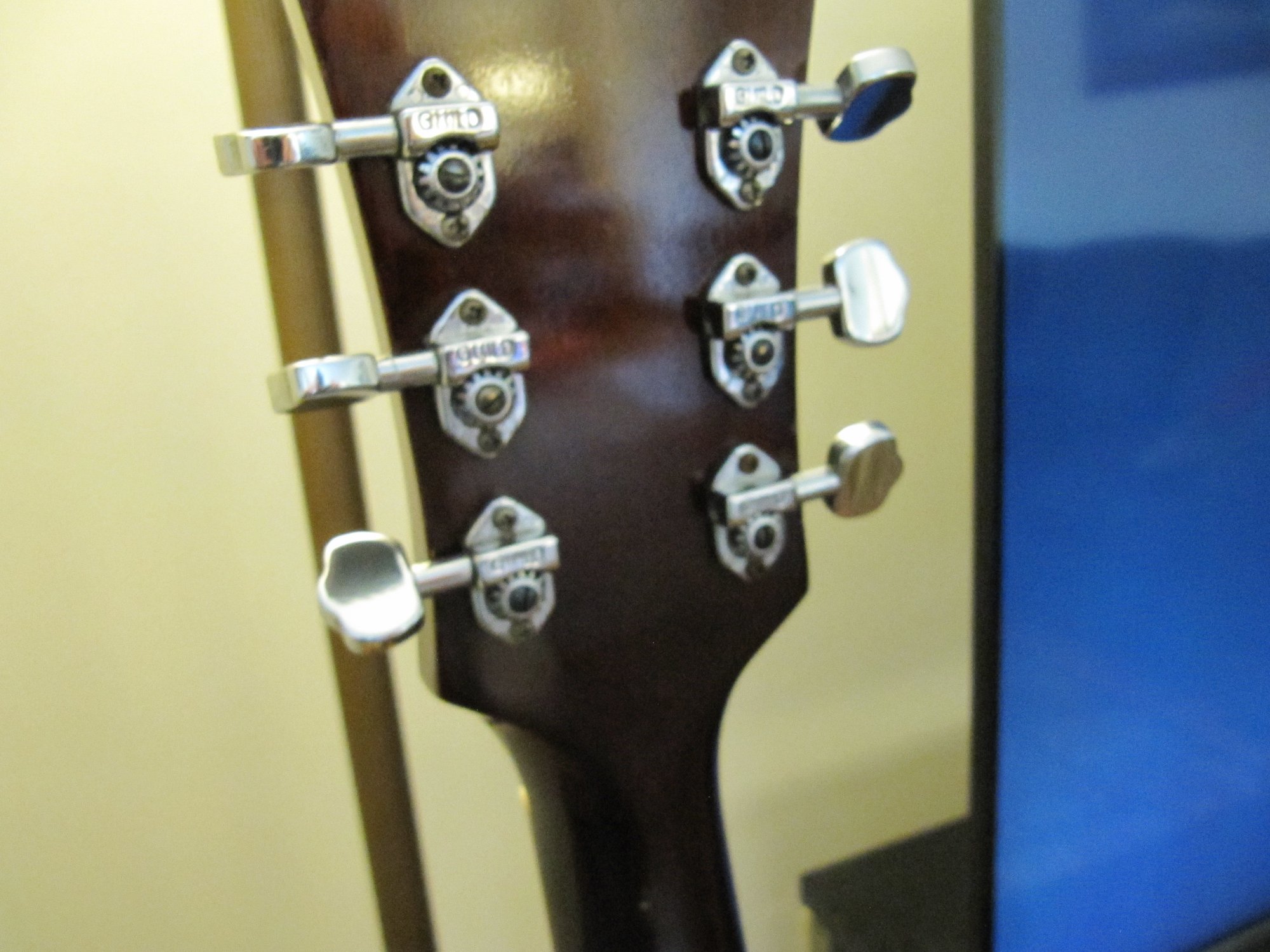 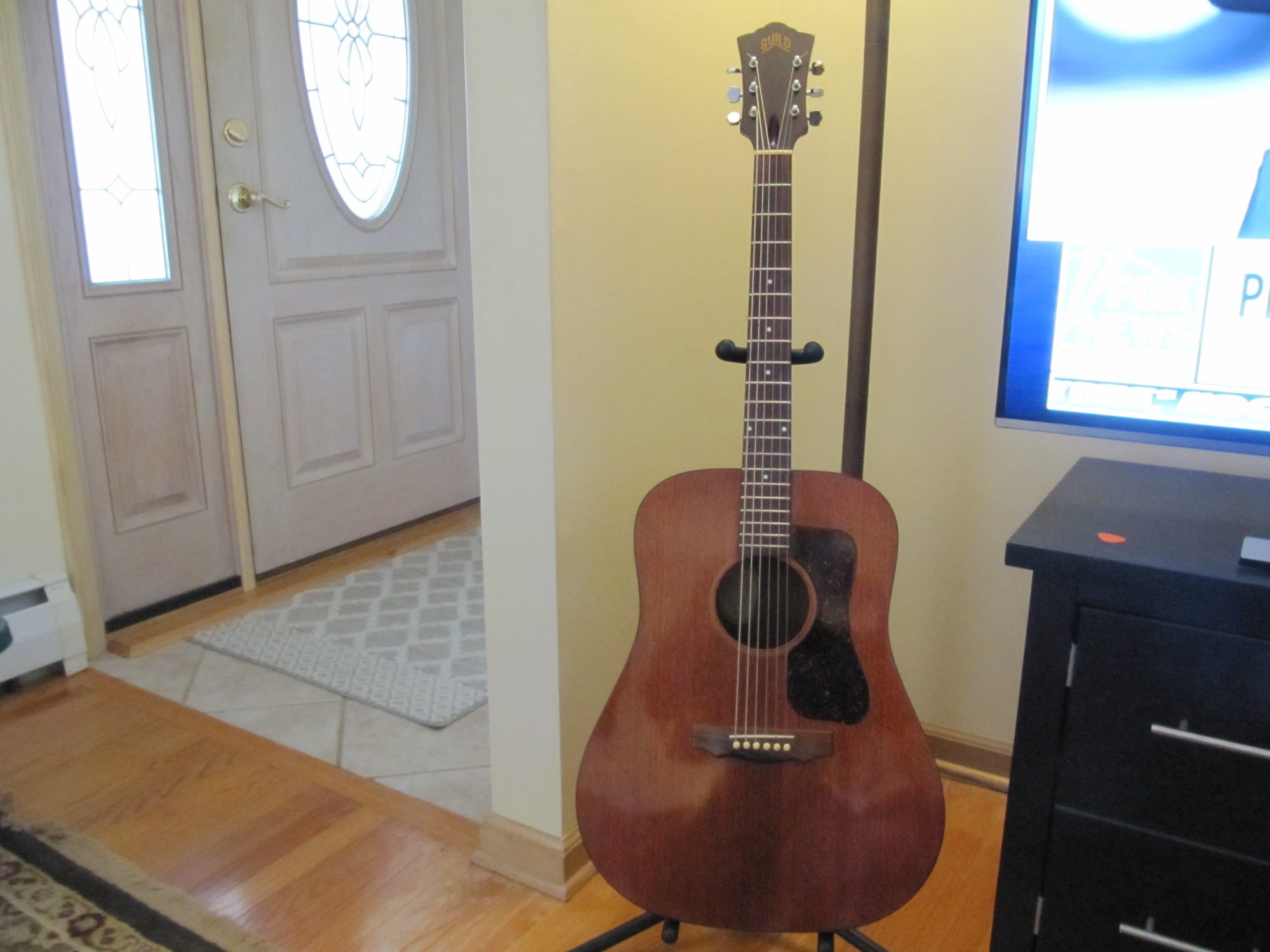 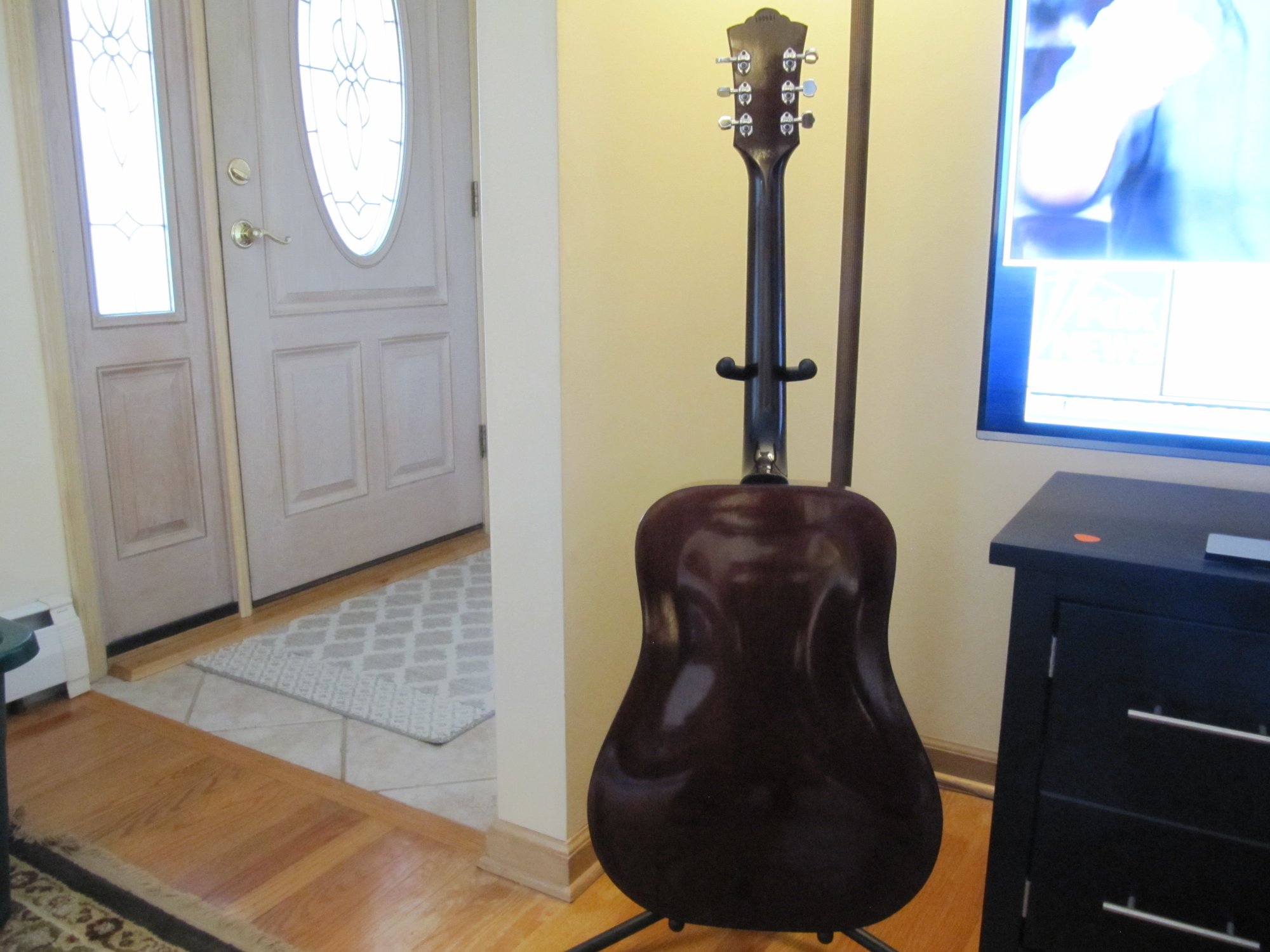 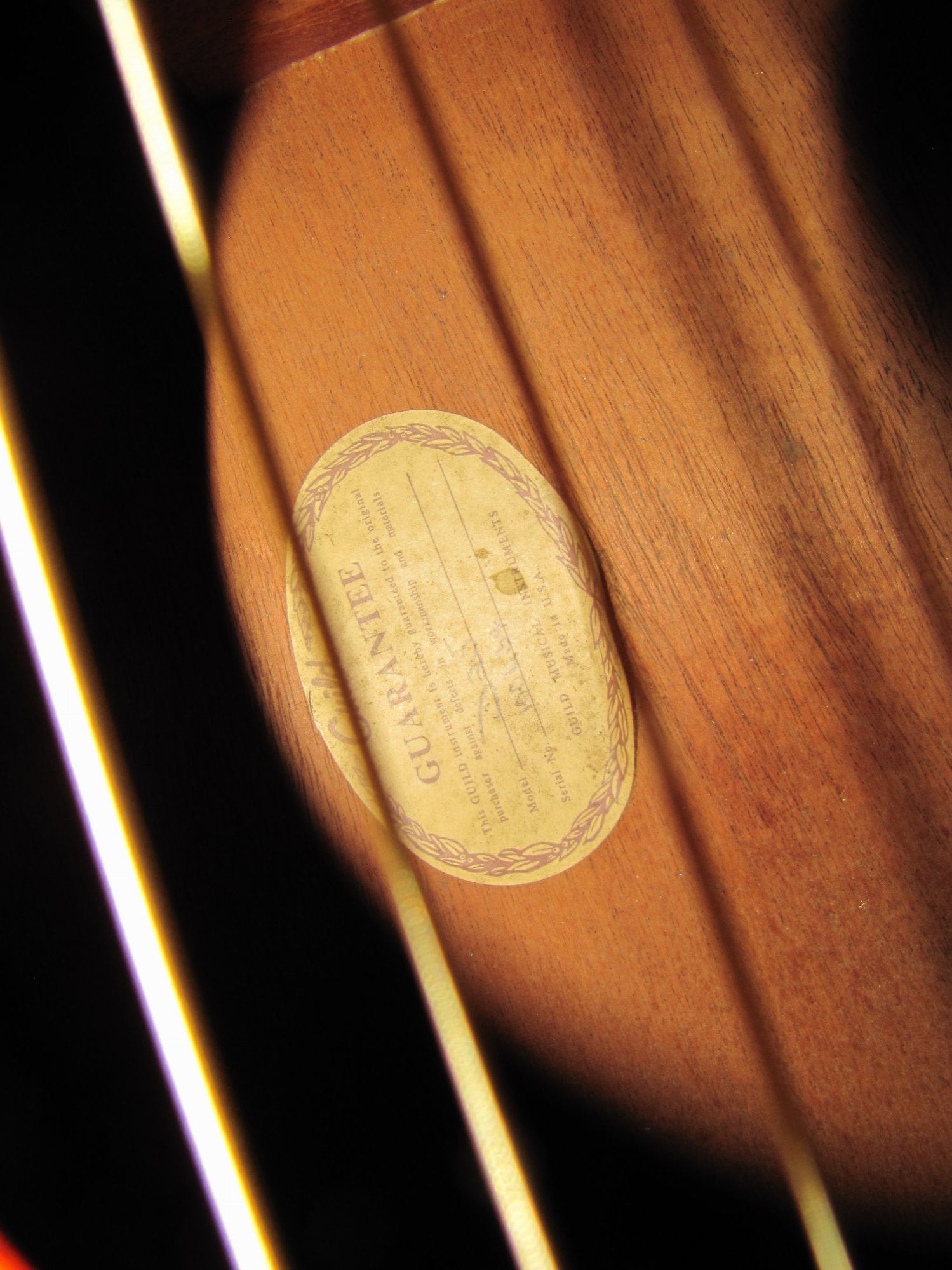 But the D25 lived on long after the 70's and even way later when Guild moved to Corona, CA after Fender bought them, they created (only in Corona 2 years) an all mahogany flat backed version of the D-25 in an array of party colors and finishes!! Some people know when and where they did what, but I'm not one of them. But if you throw a good photo up, I can usually tell mahogany from spruce...... usually.

Beautiful!! For sure mahogany!!!

Variation 2 hog top arched back. Awesome guitar great score, great tuners. Unusual. Special order? Neat guitar, this is the one I really wanted but ended up with something different, Big Red.

From the net, possibly written by someone here?

1968-72: All mahogany, with a flat, braced back (essentially an all-mahogany version of the D-35). They have a sweet, bright tone.

1972-74: A transitional period, during which some D-25's were all mahogany flatbacks, some were all-mahogany archbacks, and during the latter part of this era, stained spruce replaced mahogany on the top.

1975 and later: Spruce top, archback mahogany. Many tops stained to appear as if still mahogany. These are big-sounding dreadnoughts with lots of volume and sustain.
Last edited: Sep 13, 2020

Love those tuners! Uncommon but original & most likely made by Gotoh.

bobouz said:
Love those tuners! Uncommon but original & most likely made by Gotoh.
Click to expand...

They are Kolb tuners.

Very nice! As others have said, no question that is a mahogany top...
Enjoy!

Sweet! Man that looks to be in great shape. 'Hog top for sure. Interesting tuners, not like the 3-in-line tuners on my '76.
J

Thank you all. I spend a few hours cleaning it, it wasnt that pretty when i got it. Story i got from the seller was he was given the guitar by a widow who didnt want it anymore. I love it, action is great and its a pleasure to play. It really is in excellent condition Came with original case, its just missing the truss rod cover. It was listed on craigs for 700 i took it home for 450, i think i got a good deal

That would be a felony in NY!! Great deal, beautiful guitar!! Enjoy

GGJaguar said:
They are Kolb tuners.
Click to expand...

Ah yes, I remember now that you say it! Anyway, I really like the look of those tuners. Saw some a while back on a F-30 from the same era.
M

Incredible instrument! you got a good one. . .
D

I am new to this site but I love reading about this stuff. I play Guild because I choose to. I have a 1983 D25 as well as a 2002 D55. I love them both but I got to tell you I play that D 25 a lot more. It’s got a quick neck, soft tone, great harmonics, low end and volume is terrific. I’ve had both of these guitars set up with great action, it’s about as tight as it can be. The volume on the D 55 is also superb. I feel like I can play out with both of these guitars and not use an amp. I play elixir nano webs 13s, it’s a heavy string but I feel it sounds the best. They last long and they feel good on your fingertips. 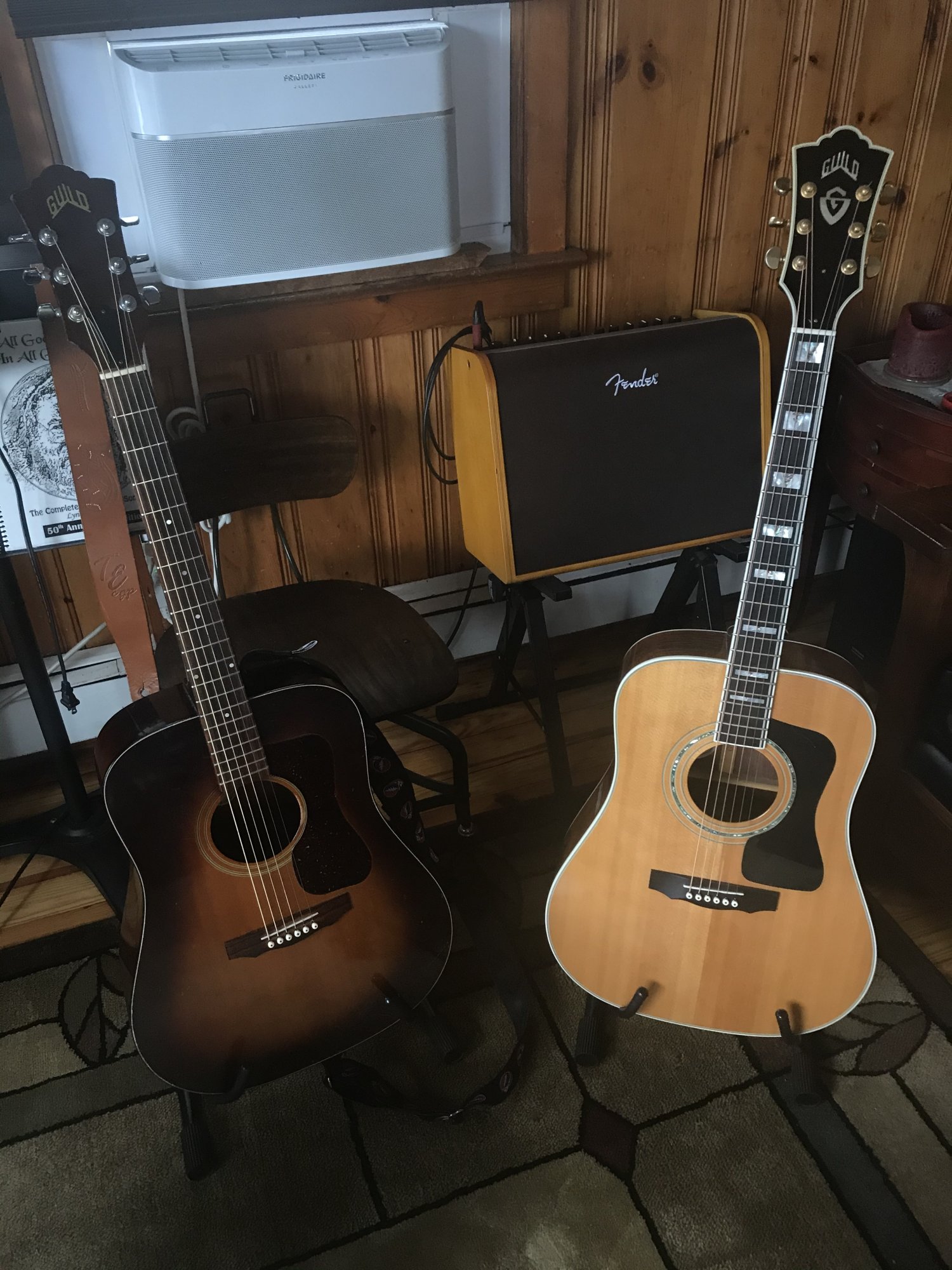