Give me your 2c on this Reverb dispute

So recently I ordered a little curio from Italy to the UK, an Epiphone Country Gentleman Chet Atkins sig. Made for about two years 1989 to 1990/1, with some dispute about whether this was in Japan or Korea.

The seller is a dealer. Here's the listing: https://reverb.com/uk/item/20254520-japan-epiphone-chet-atkins-country-gentlemen-eb-ebony-rif150. Please note the description of the condition.

The seller confidently states it was made in Japan; I did my own research which casts doubt on that. I could tell there were some dents in the spruce top (spruce dents easily) and wrote to the seller to ask if there was any damage and could he send pictures. He didn't answer but sent a bunch of pictures showing no dings or damage. The guitar is black which of course makes these things harder to see/easier to conceal. The seller took a week to get it packed (which I can allow) and it shipped without a case. He didn't mention it didn't have a case; he didn't say it did either. It's always kind of weird to receive a guitar without even a gigbag, but there we go.

Anyway, when it arrives (without a case) I notice it has a lot of dings in the spruce which I expected, finish flaking on the headstock along the join (not expected but I can live with), but also a crack in the body on the back along the binding which seems to have been repaired with something like fibreglass along the binding line. Also, there are strange drippy goops on the back and what look like filled little round holes. It's really hard to say what it is. It looks like previous transport damage, possibly when the seller bought it, possibly earlier. See images below. NB a British penny is larger than a US penny 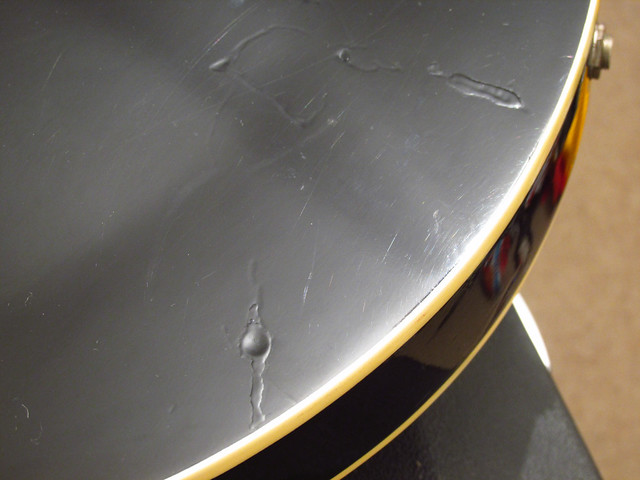 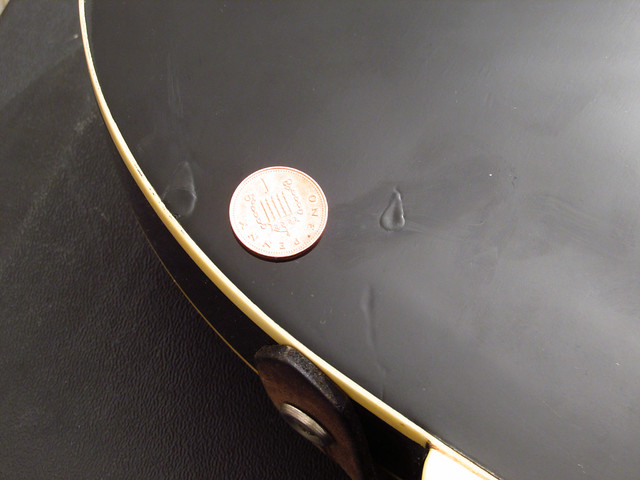 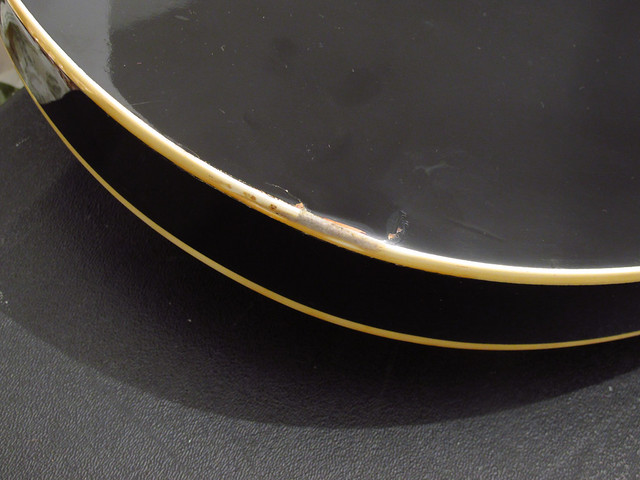 On the one hand, the price was quite good - I've seen these advertised at $999 (although they may never have sold for that); on the other hand, it wasn't a guitar I massively wanted. I bought it because the price was right and I thought if I didn't like it I could flip it. Obviously, with a repaired crack it's unlikely any Chet collectors are going to splash out so it would more likely be a long wait for another curious punter like myself.

The seller initially offered me a rebate of €30 which I felt was derisory. He has now agreed to refund but refused to pay the return shipping. Paypal have said they can only extract the amount paid (e.g. purchase price plus my original shipping cost); their return refund scheme has a ceiling of £15. The return will likely cost me £50 + insurance, so let's say £65.

At the end of the day I quite like the guitar. I'm not usually into humbuckers but these sound good and pokey; i like the lack of binding on the fingerboard. I also suspect this seller has been deliberately dishonest and definitely hampered my chances of selling on. I don't particularly want to lose £45-£50 to a dishonest seller into the bargain. Interestingly, since they advertise themselves as being a shop they are subject to EU distance selling regs which means they technically have to pay the return. Obviously, getting the money off them is another matter.

One final note, Reverb were absolutely ****ing useless. If I hadn't paid with Paypal I'd have no comeback. I had suspected as much when you read about their dispute resolution on the site. One of their "musicians" will mediate, apparently (God help us). What this means is that someone called Chris wrote to me after I'd started the Paypal claim begging me to close it as it was against Reverb and not the seller (I guess they channeled the payment). I wrote back to him and booked a time for their offered phone call. It never happened and they never answered the subsequent emails. The phone number on the site doesn't work; the chat button on the site doesn't work; the emails aren't answered. I can tell you this, I will never use Reverb payments ever ever.

What do y'all think? He says he'd rather not have it back. I didn't get a great pick of the binding repair, but it's very obviously cracked and repaired after impact damage. I was thinking of asking for €100 to €150 rebate.

Here's the "acceptable" damage, dings in the spruce top and finish flaking on the headstock: 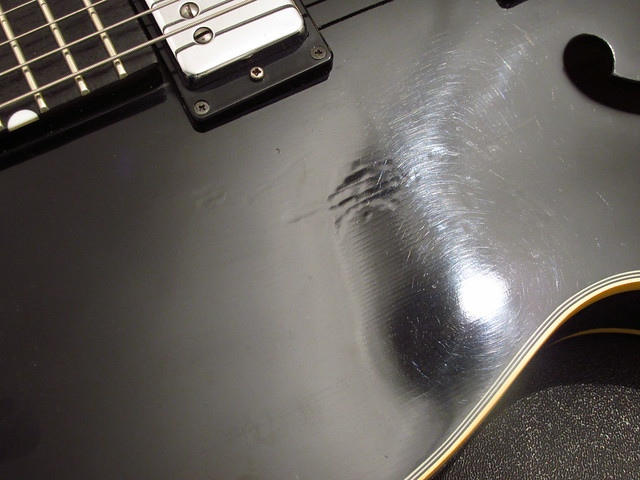 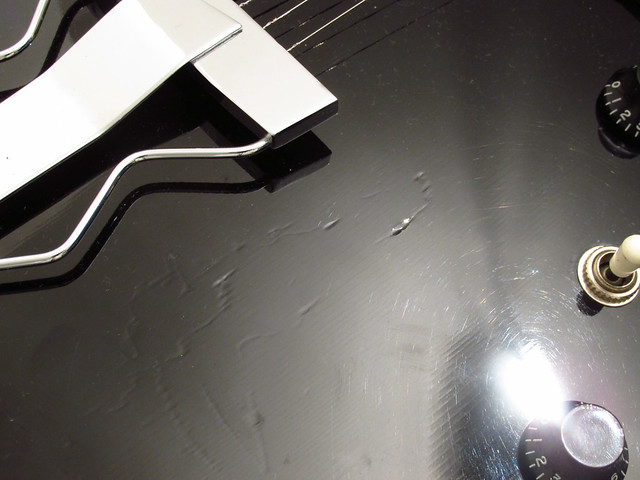 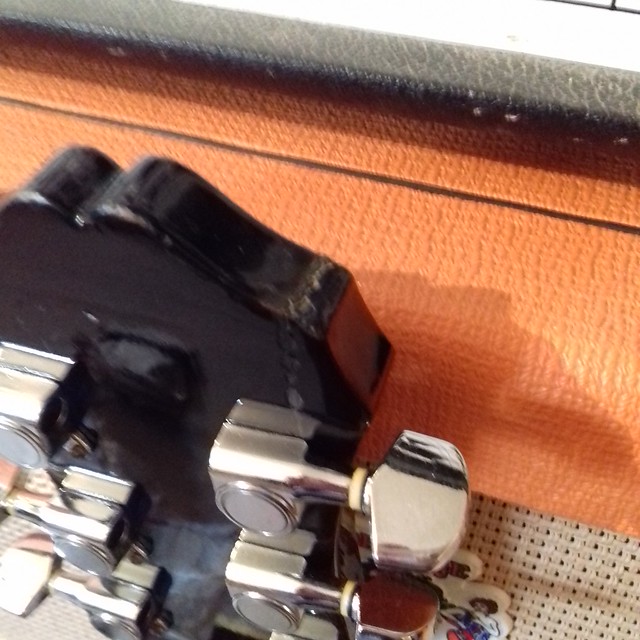 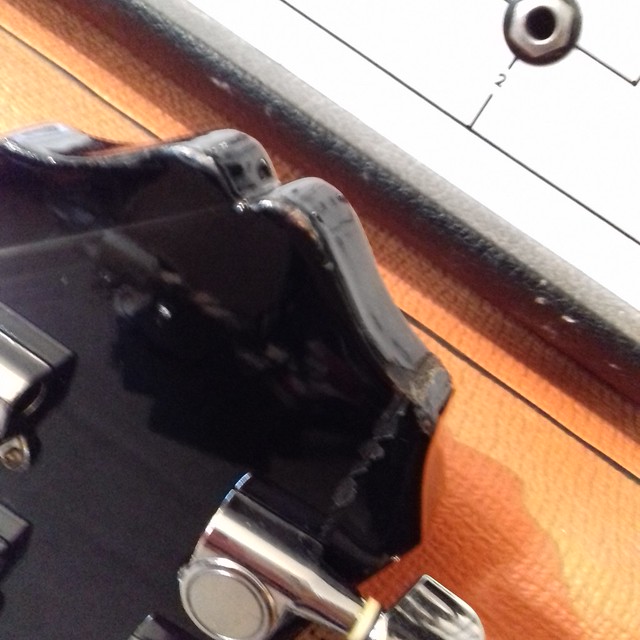 and swallow the loss on the shipping?
P

Another note on Reverb. Unlike eBay, the feedback is reciprocal, so if I leave him a neg he can just leave me a revenge neg in return.

dang, sorry to hear this. I was close to buya gibby CG before I found mx first guild. sorry I cant give any helpful input.

The seller is definitely guilty of not fully disclosing the true condition of the guitar. I'd return it despite the loss of shipping costs. In the end, you'll spend more time trying to get your money back than your time is worth.

Also, that's really disappointing to hear about Reverb's reluctance to mediate the dispute. I've never made any large purchases on Reverb, only pedals, but I'm much more hesitant now.
W

I'm of the opinion that if there is something you really like about the guitar -- as you say -- you should try to work out an acceptable partial refund scenario with the seller and hang onto it.

I bought a Guild F50R from a seller who'd taken a bunch of "arty" photos of the instrument, funny close-ups, weird angles, etc.

I complained; he said I was being petty -- we went back and forth.

But I really liked the guitar -- the sound was amazing and it was in great shape, except for the back of the neck. (I never did learn what had happend to it.)

This was some years ago, before there were as many protections in place on eBay for buyers as there are now.

Eventually we worked out a partial refund deal, thought neither of us was happy about it -- I thought the refund should have been bigger; he resented having to refund anything. But we worked it out and moved on -- we were just glad not to have to deal with each other anymore.

I had the guitar neck repaired and refinished -- it's beautiful now! -- and all the enmity is but a distant memory.

I may have not got the deal I thought I was getting at the time, but everytime I pick up that guitar, I'm glad I didn't send it back.

parker_knoll said:
....someone called Chris wrote to me after I'd started the Paypal claim begging me to close it as it was against Reverb and not the seller....
Click to expand...

I'm sorry to say, but I think complaining to paypal first was a mistake. That guitar was not "as described." I've dealt with reverb chat a number of times, and I've always got what I was looking for. (It's only "on" during reverb's business hours.)

I sold a guitar once, it was as described, but the buyer "didn't like its sound." He wanted to return it, and he wanted me to pay for the return. Fat chance. Reverb stepped in and asked if I'd refund the guy's money if they paid for the return shipping. So that's what I did, not that I liked it, but I didn't lose anything.

I could be wrong, but I think reverb might have paid for your return shipping if you'd sent them those photos of undisclosed damage. They get a heck of a deal on shipping, BTW.

parker_knoll said:
and swallow the loss on the shipping?
Click to expand...

I would counsel that you accept that and move on since I find it healthier to just take what I can get in situations like these. Whatever shipping costs, there's no way it would cover the repairs you'd need to get that guitar back into proper shape, and the guitar will likely bug you forever.

I got royally burned on a guitar once before I knew what I was doing. This is what I did: https://www.thegearpage.net/board/index.php?threads/the-guitar-from-hell.473956/

I lost probably $1500 on that guitar when all was said and done, but I taught myself how to repair and work on semi-hollows with it. In the end I sold it to a young kid for a song who was *thrilled* to get it. In my case I had no way out so I turned my pain into positive things. Sometimes the best you can get out of a bad deal is the cost of return shipping. I've been there, too.

Goopy spots are touchup, not in a very visible place. I'd rather have scratches and dings than touch up paint

I'd think what's fair is figure out a % of how much the guitar doesn't match the description through omission or otherwise, and ask for that amount to be taken off the guitar.

Weigh the cost of a return in case he won't budge?

This should be fair to both parties.
P

I have asked for a fairly handsome rebate via PayPal disputes. If he doesn't like that it goes back.
P

Just to update this, i asked for a whopping €250 rebate and got it because the seller never responded to the case. At the last minute Reverb did promise to cover return shipping up to $100 but it was too late: by the time I read the message the case had closed.

So in the end a cool rare guitar with some bumps for €350 and i can buy a bigsby and locking tuners with the rebate.