Guitar Center is preparing for a possible bankruptcy filing.

It’s still possible that Guitar Center could avert bankruptcy, as it did earlier this year.

They’ve been on thin ice for years, but I’m surprised the pandemic hasn’t already destroyed them once and for all.

GC has operated for years as a kind of loss leader. The stores themselves aren't making enough money to keep the company in business, but instrument makers have benefited from GC's broad reach to the extent that keeping it on life support has been worth it to them and their VC allies.

For those who can't get past the paywall


Guitar Center is preparing for a possible bankruptcy filing.


Guitar Center has begun to prepare for a potential bankruptcy filing that could come as soon as next month, people with knowledge of the situation said. The retailer missed an interest payment of roughly $45 million earlier this month, setting off a 30-day grace period that could end in default, the people said.
The country’s largest retailer of musical instruments has reached out to creditors to discuss a plan that would involve the company filing for bankruptcy this year and emerging from it in early 2021, said the people, who requested anonymity because the talks are confidential. A spokesperson for Guitar Center did not respond to a request for comment.
It’s still possible that Guitar Center could avert bankruptcy, as it did earlier this year when it resolved a skipped interest payment in April with a distressed debt exchange. That led to a downgrade by the credit ratings agency Moody’s in May, which noted that the transaction did not “fundamentally change” the company’s “untenable” capital structure. It was the third cut in the company’s credit rating this year.
Guitar Center, whose roots go back to 1959, has nearly 300 stores nationwide. It is owned by private equity firm Ares Management, which acquired a majority stake in 2014 by converting some of the debt it owned in the retailer into equity. The retailer generated about $2.3 billion in sales its most recent fiscal year, according to Moody’s. It has about $1.3 billion in debt. Ares declined to comment.
ADVERTISEMENT
Continue reading the main story


For years, the company has struggled with the shift to online shopping and debt built up from a leveraged buyout by Bain Capital in 2007. There had been signs of a turnaround — it notched 10 consecutive quarters of sales growth through the end of February, one of the sources said — before the pandemic hit its business hard, as it has for much of the store-based retail industry.
If Guitar Center files for bankruptcy, it would follow the path of other retailers including J. Crew, Neiman Marcus and J.C. Penney, which were unable to withstand the impact of the downturn during the pandemic. Some, like Neiman Marcus, have already emerged from bankruptcy protection.

"the company has struggled with the shift to online shopping" sounds interesting to me.

They own musiciansfriend and music123 (which is being merged with the former) so they have some kind of online presence. Their shipping and return policies for used and vintage gear are pretty consumer friendly and that seems like a good strategy to bridge the gap between brick and mortar and online. I guess the NYT analyst was not analyzing or they aren't enough to "save" GC,

Well, that was my question too, frono: Is Musician's Friend allegedly going down too, or just the brick and mortar stores?

Seems to me Sweetwater has done a great job without storefronts.

They also have their own Guitar Center on-line presence. They are competing with themselves to a certain extent. I have enjoyed using their "Used Gear" return policy in the past (as well as keeping some used gear!). One wonders if that concept will disappear.

I also wonder if they folded, does that help the small local shops? 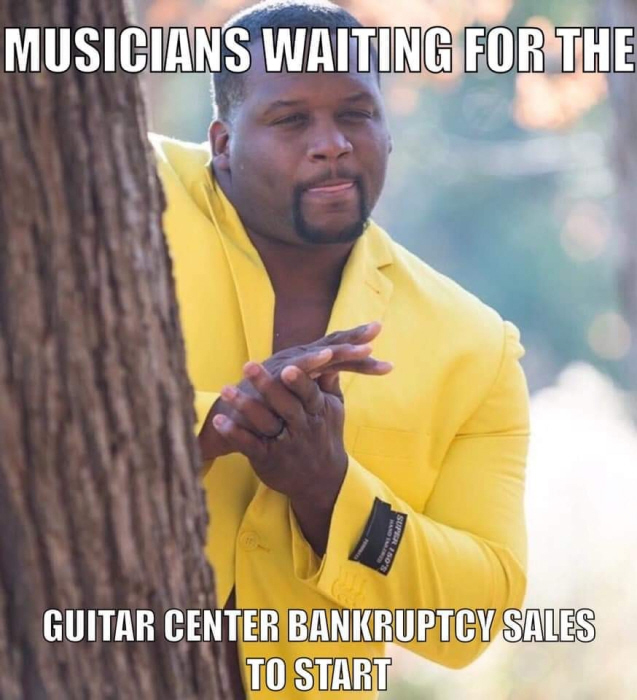 fronobulax said:
Their shipping and return policies for used and vintage gear are pretty consumer friendly and that seems like a good strategy to bridge the gap between brick and mortar and online.
Click to expand...

I knew than and that is why I used both terms. Flat rate shipping and a guaranteed no questions asked return period still seems to me to be a good deal compared to what some private sellers and some stores offer. Could GC do better - sure, especially since there are a lot of folks who don't realize the Vintage and Used policies are not the same but even so it is better than much of the competition.

i wonder who or what will take its place once it folds.

Westerly Wood said:
i wonder who or what will take its place once it folds.
Click to expand...

I guess what might happen this time is they will file for Chapter 11 and reorganize/refinance and come out of it in 2021. So maybe a few stores get closed in the process. Can't imagine they would go out of business. To many suppliers depend on them.
Ralf

GAD said:
I’m surprised the pandemic hasn’t already destroyed them once and for all.
Click to expand...

Musical instrument retail - for anyone who has a website and ships - hasn't been hit that hard by the pandemic at all - the online big box stores might have actually sold more....!

I haven't heard anything about Sam Ash going chapter 13 or 11. Maybe this will be their time to shine.

Walter Broes said:
Musical instrument retail - for anyone who has a website and ships - hasn't been hit that hard by the pandemic at all - the online big box stores might have actually sold more....!
Click to expand...

Sure, but there's a difference between running a successful website and keeping 269 huge brick and mortar shops running.

GAD said:
I haven't heard anything about Sam Ash going chapter 13 or 11. Maybe this will be their time to shine.
Click to expand...

IMHO, Sam Ash is in a completely different league than GC. I knew Sam when he was alive, and he was a good man who treated his employees like family, and that's why they almost never left. They're also very knowledgable and service oriented. GC's hiring process is more like "Here, fog up this mirror", and that's why you mostly get dumb looks when you ask a question there.

I have done well buying used from GC in the past, but I certainly never went out of my way to patronize them.

I've bought one guitar from GC. I got a killer deal and it took some time and negotiation and I think they finally agreed to my terms just so I'd leave. And years later tried to patronize them because I knew they were having tough times and didn't want them to fold. But by then, all the good employees had gone and a new GM who was just a nasty and rude piece of work. Their whole attitude was "Why are you trying to buy this guitar from us and giving us a hard time? Just grab something off the wall and pay for it!!" So after trying to patronize them and giving up, I got recommends from both Sandy and also TX regarding the guitars I was looking for and got way better deals and better service online. They do provide a service but I rarely go into my local one any more. It used to be so much better.