In the past I have used my Dremal tool, Dremal buffing disk, and taped all my frets to prevent any of the liquid MAAS polishing compound (applied very very sparingly) from getting onto the fretboard. The down side to this approach is the possible overheating of the frets and tape if the frets are too tarnished. What are my options? I've stay away from 0000 steel wool due to the possible mess and cleanup issues that comes with this option. I am thinking more and more that I am going to have to bit the bullet and go with 0000 steel wool. Your thoughts?

tommym said:
In the past I have used my Dremal tool, Dremal buffing disk, and taped all my frets to prevent any of the liquid MAAS polishing compound (applied very very sparingly) from getting onto the fretboard. The down side to this approach is the possible overheating of the frets and tape if the frets are too tarnished. What are my options? I've stay away from 0000 steel wool due to the possible mess and cleanup issues that comes with this option. I am thinking more and more that I am going to have to bit the bullet and go with 0000 steel wool. Your thoughts?
Click to expand...

You could use 0000 bronze wool - softer than steel and less inclined to splinter.

Many here swear by Gorgomyte fret cleaner and from what I've seen it works really well. Youtube video of how it works HERE!!
W 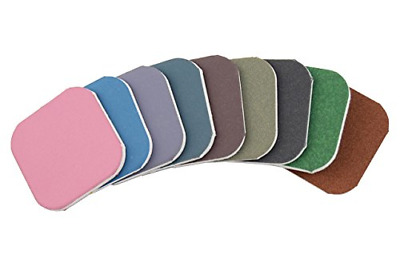 Inexpensive; much, much finer than 0000 steel wool (and no steel wool dust); no chemicals; they last a long time -- and they make ebony fretboards shine like a mirror!
T

Thanks for the tips! I check them all out.

I use bronze wool to thoroughly clean the whole board & get every bit of crud off (particularly great with electrics since it’s non-magnetic). It does flake, but clean up is easy.

Then follow with Fret Doctor & your board will look gorgeous!
T

I purchased and tested the Micro Mesh as recommended above. I did a quick partial polish of the frets to test the product. I just loosening the strings for the time being and only went part way down the neck.

My thoughts on this product.....

This is way faster and cleaner than how I did it in the past with the Dremal buffing wheel and buffing / polishing paste. Since there was no heat generated against the tape from the buffing wheel, there is no broadcasting of the tape adhesive onto the fretboard, and I can reuse the tape on the next fret. I started with the Grey 2400 grit pad and it clean the frets very quickly. Not sure I really need to go any further down the line in grit, as the finished frets are no worse than what the Dremal buffing wheel and buffing / polishing paste would produce in any case. The photo below does not do the finished polish any justice, but it was the best I could do with my old cell phone. In the photo below, the frets where the grey Micro Mesh pad padding is resting are the current lightly tarnished frets that continue down to the sound hole. Up to that point only took me a couple of minutes.

I am sure that the finer grits will produce a superior finish, but I will need to experiment on a practical stopping point as I do not want to go too far down the rabbit hole and turn this back into a dreaded chore. 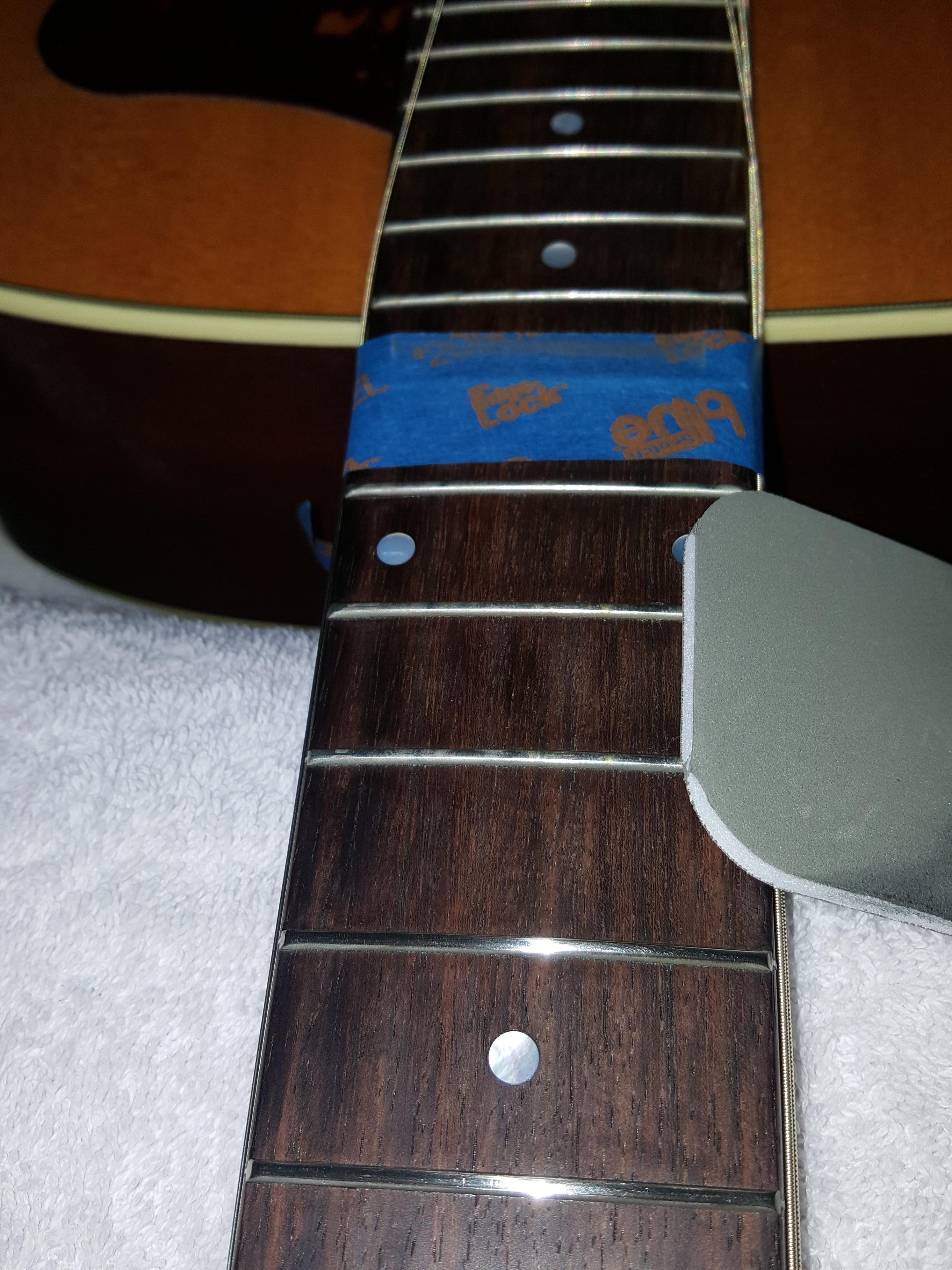 As a ten-year user of 0000 steel wool, my advice is to buy Gorgomyte and never look back. Stuff is amazing. Honestly everything else is a waste of time once you experience the wonders of the cloth.

I usually use two such thin metal fretboard guards (depending on area of the fretboard) when polishing the frets, that way I don't touch the fretboard wood. 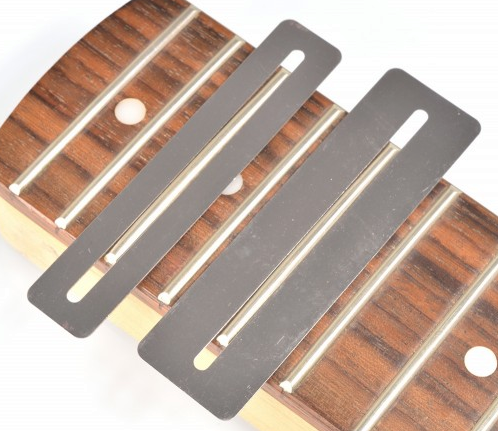 Ive used the 0000 steel wool for years. I go over the entire fretboard with it. Cleans the fret board and polished the frets.

I must admit, the Gorgomyte is my choice for this job. The frets come out like mirrors and the wood is not oily looking , but more of a satin new look, especially ebony. Don't knock it until you try it.

0000 steel wool to remove the crud, and micro mesh for the fret polish.
T

Yeah, if there is too much crud off to the sides of the frets, then I will still use steel wool.

Just got off the phone with a luthier regarding some other guitar issues and talked a few minutes about fret polishing. Since I use longer lasting coated guitar strings, his recommendation was to spend the extra time between string changes and and micro polish down to 12,000 since I already have the pads on hand. His two cents is that a smoother finished metal surface has less overall surface area than one with micro scratches, and these micro scratches only add to the tarnishing process. He also added that once you get the polishing process down pat, it goes pretty quick. Not so sure my arthritic hands and wrists can handle that many pads in one setting. Might just stick with the Grey 2400 grit.

One last thing he pointed out was the the Micro Mesh grit rating does not in any way correspond to U.S. grit ratings. Thus my Micro Mesh Grey 2400 grit is equivalent to somewhere between 800 to 1,000 on the U.S. scale.

Micromesh is fabric backed, unlike most sandpaper, which is paper backed, and tends to be stiff.

On The Micromesh website, there is a table of equivalencies between the Micromesh numbers, and the common grit grades. It does vary with the type of Micromesh you are using.

Those who use Micromesh in their work, tend to take it all the way up to the 12,000. As one of my friends put it, if you can't use the reflection in the frets to shave by, you haven't finished the job. Same person wrote to Micromesh to see if even finer than the number 12,000 could be bought. Unfortunately, Micromesh's equipment won't allow it.
W

While you can tape off the wood, or use the Stew-Mac metal fret thingies, to protect the fretboard, I prefer to use the micro-mesh on the frets AND the fingerboard.

As mentioned above, micro-mesh on ebony makes for a super-smooth (mirror-like) finish. It's probaby my imagination that it feels better when playing, but it SEEMS more comfortable.

tommym said:
One last thing he pointed out was the the Micro Mesh grit rating does not in any way correspond to U.S. grit ratings. Thus my Micro Mesh Grey 2400 grit is equivalent to somewhere between 800 to 1,000 on the U.S. scale.
Click to expand...

To further complicate things, Micro-Mesh is available in 4 different versions and "regular" US or European sandpaper is totally different in grid, so to use your example, 2400 grey = 800-1000 US but P1500-P2000 Europe. Crazy... 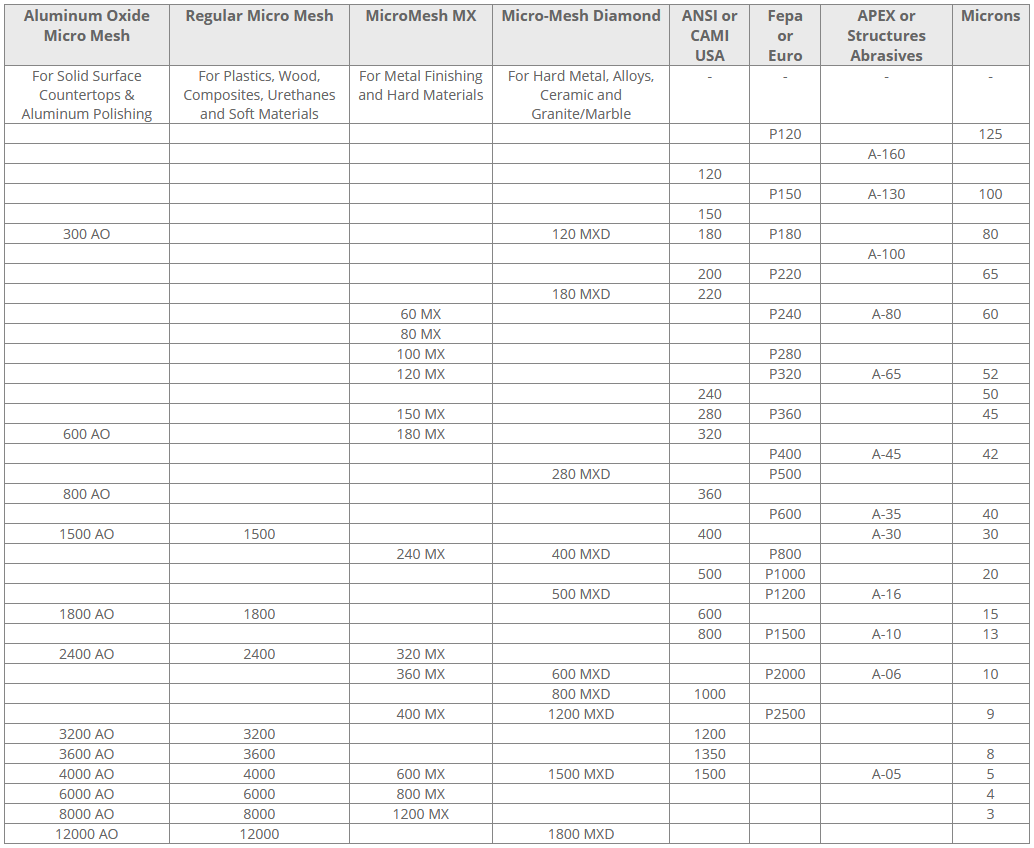 OK…….So I dressed every fret with the full spectrum of micro mesh pads! BUT, there is no way my arthritic fingers and wrists can ever do this again. It took me about 60 minutes once I had the strings off. That aside, what about the results? Yeah, the frets look really nice, but I’d have to do an A vs B comparison against my old Dremel buffing wheel technique to truthfully see the difference. I took a picture of the finished product, but without a highly magnified image, the picture doesn’t tell the crowd anything. Other insights the luthier gave me today were the following:
Tommy 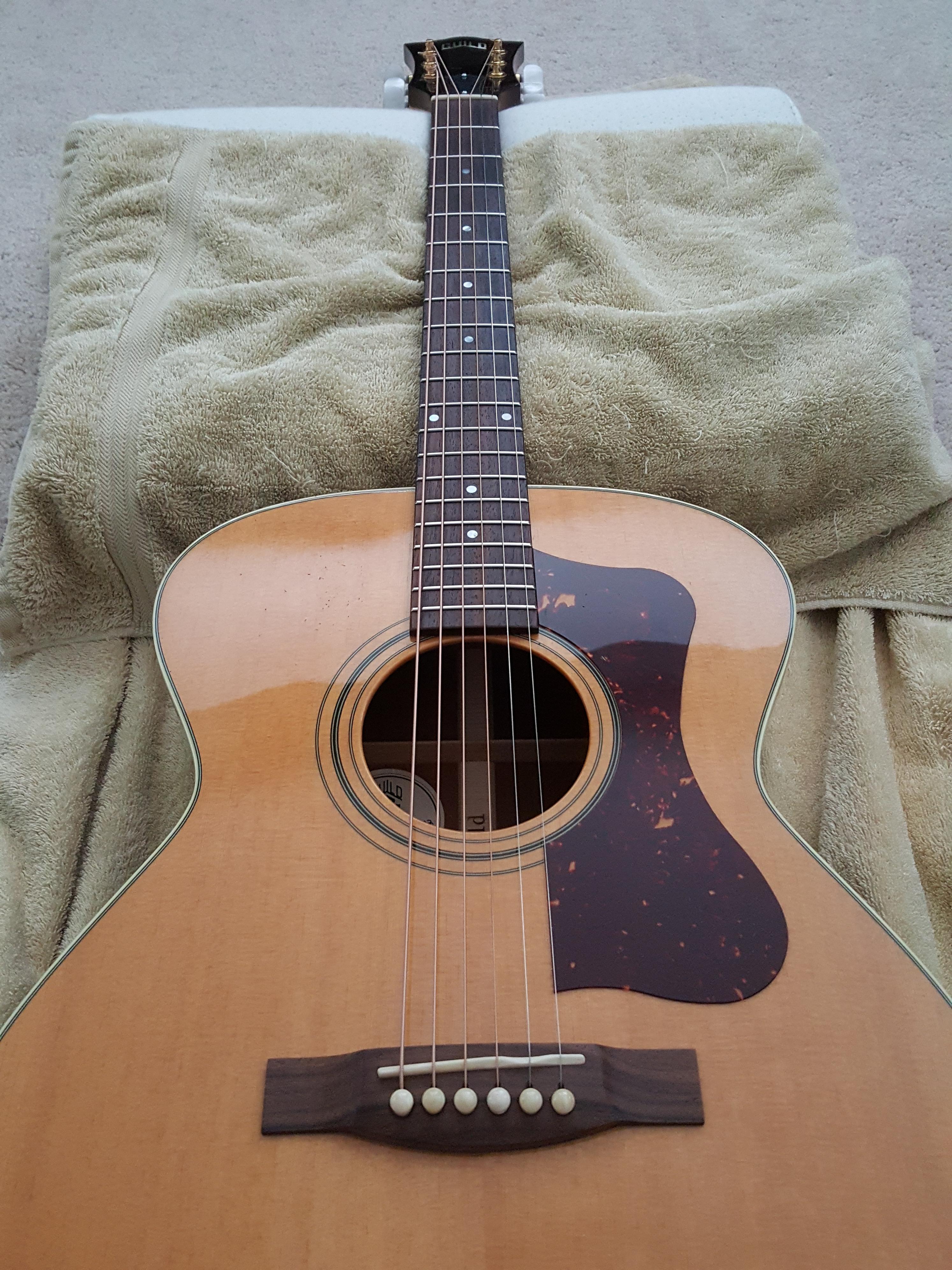 Gorgomyte can do those frets in three or four minutes.

Using the micro-mesh pads as a first step to remove tarnish and clean the fretboard is like waxing your car without washing the dirt off first.

it’s a two-part process: 0000 steel wool first to remove the dirt buildup and tarnish; micro-mesh second to polish the frets. (I do this on any guitar I buy used — most need cleaning when I get them, and some really, REALLY need it! More than one guitar I’ve picked up used has come with green or black frets and dirt caked like dry mud on the fretboard. Thankfully most aren’t that bad.)

I apply boiled linseed oil to the fretboard first, and remove it with the steel wool. It catalyzes after two applications (about a year apart) and you never have to do it again.

The whole two-step process takes me about 20 minutes, but I don’t suffer from arthritis or joint pain.

Gorgomyte is good stuff. I use it after the steel wool / micro-mesh treatment, not as a first step treatment, usually after a couple string changes.

If I were to skip the micro-mesh treatment, I’d only use the Gorgomyte after I’d gotten all the skunge off the frets / fretboard with the 0000 steel wool and boiled linseed oil.

There’s no one-size-fits-all method to keeping your fretboard and frets clean. Just saying this is what I do, and only as a first step on used guitars that come into my orbit.
You must log in or register to reply here.
Share:
Facebook Twitter Reddit Pinterest Tumblr WhatsApp Email Link
Top