So my dentist schedules me for a 10:30 appointment. His assistant sets me back in the chair and says "the Doctor will be right here in a few minutes." At 11:15 he finally strolls in. This is typical at this office. I complained about it today, I told him he is obviously overbooked. Am I just being an old curmudgeon, or should I expect more timeliness?

My old dentist only scheduled one appointment at a time. I'd get there, go right in and be worked on, done deal. One time there was someone else in the waiting room; I thought that was odd; when he came to get me he said "Hi Mom, we''ll go for lunch as soon as I'm done here, LOL.

Marc, 45 mins sitting in a chair waiting on dentist is way over the line. way. I have noticed that many businesses are overwhelmed and cannot hire enough employees due to COVID relief. Everyone is hiring right now.

Depends. If the dentist was offsite and strolled in for a 10:30 appointment at 11:15 then they had no business giving you a 10:30 appointment. But if the dentist was with another patient and running late then that is just the way you have to do things if you are a dentist and want to make money. You complain now but when the dentist fits you in 15 minutes after you call so you don't have to be in pain any longer than necessary, you might be more forgiving.

If this bothers you then one trick is to strive for the first appointment of the day. They will almost never be late getting to you.

My local dental practices have one or two dentists, a dental assistant or two and multiple hygienists. But if your appointment is for a cleaning they can usually get a dentist to your chair in about five minutes. Major work that requires a dentist is usually scheduled with a little bit of slack but the practice doesn't make money if people are sitting around without patients and getting paid anyway. Let's not forget the cost of x-ray machines and other equipment

A specialist I used to see, now retired, would charge a hefty fee for no-shows and to patients that were late by more than 15 minutes. I never had to wait long, nor did it ever feel like he had to rush off to the next patient. I believe his scheduling staff prevented over booking. I also suspect this was part of his operational philosophy and I certainly appreciated it.

As a side note, I wonder how many folks delayed their regular visits to the dentist because of COVID and now the dentists are trying their best to catch-up.
S

Think if dentist involved with another patient and taking longer, the dentist should keep you aware or give you the option of leaving and reschedule.
If dentist is uncaring about your time, I would find another dentist.
You did well Dread!

mike1100 said:
A specialist I used to see, now retired, would charge a hefty fee for no-shows and to patients that were late by more than 15 minutes. I never had to wait long, nor did it ever feel like he had to rush off to the next patient. I believe his scheduling staff prevented over booking. I also suspect this was part of his operational philosophy and I certainly appreciated it.
Click to expand...

I had a medical provider who had that policy and I asked for reimbursement if the provider was more than 15 minutes late. I got a waiver to the late fee in writing, but then I had a record of being on time or early so they weren't taking a risk.

Stuball48 said:
Think if dentist involved with another patient and taking longer, the dentist should keep you aware or give you the option of leaving and reschedule.
If dentist is uncaring about your time, I would find another dentist.
You did well Dread!
Click to expand...

In the practices I use that is the job of the hygienist or the assistant and they usually check in every five minutes or so. Leaving and rescheduling is not always feasible - if you waited six months for the appointment and are faced with six months to reschedule 45 minutes can seem petty or tolerable. But part of the issue is what are the options. I live in a small town and have several choices for medical generalists, dentists, eye care, vet care and could switch if I go bad service. But some specialties would require driving for at least an hour. Sometimes the only alternative to bad service is no service.

If dread wants to do something constructive he should ask the dentist about the delay and why? LTG has opinions but ultimately dread has his next appointment there or somewhere else and there may be mitigating circumstances that he will only learn by asking.

In general, most medical providers value their time more than mine and make decisions so that if anyone's time is wasted it is mine. I'm more inclined to work within the flawed system than complain about it. And when my provider makes space to handle my emergency I'm OK with the system.

Find out when their lunch break is over, then, always ask for that time for your appointment.

I always book early morning appointments for all medical stuff whenever possible. First or second appointment. Less likely they get behind. Last month I had the second appointment of the day with my PCP - 8:20 - and he was 45 minutes late. I complained and he apologized. Bottom line - he arrived to the office late - that's all on him.

I have little patience (sorry!) for a doctor/dentist who feels their time is more important than mine. At the very least let me know what's going on so I can decide to stay or go.

Interesting timing of your post as I am going to the Dentist tonight!

I go to a really old school Dentist. There's him, an Assistant and an Office person. He does all the work, one patient at a time! You walk in and right to the chair!

Before we found him we played Dentist roulette. We tried some of the big places that have a Hygienist and then the Dentist comes in looks in your mouth for 30 seconds and then moves on to the next five patients waiting in other rooms. I hated all of the different places we tried!

I'll wait as long as necessary as long as they are generous with the Nitrous Oxide. I might marry me a tank of that stuff. Better than Jack.

I had a tooth pulled when I was five years old, I think I was one of the last patients to get ether - ZOWIE!

Thoreau visits the dentist and has all of his teeth removed. He had been suffering from bad teeth throughout his adult life.

"If I had got false teeth, I trust that I have not got a false conscience. It is safer to employ the dentist than the priest to repair the deficiencies of nature. By taking the ether the other day I was convinced how far asunder a man could be separated from his senses. You are told that it will make you unconscious, but no one can imagine what it is to be unconscious — how far removed from the state of consciousness and all that we call 'this world' — until he has experienced it.

"The value of the experiment is that it does give you experience of an interval as between one life and another — a greater space than you ever travelled. You are a sane mind without organs — groping for organs-which if it did not soon recover its old senses would get new ones. You expand like a seed in the ground. You exist in your roots, like a tree in the winter.

"If you have an inclination to travel, take the ether; you go beyond the furthest star. It is not necessary for them to take ether, who in their sane and waking hours are ever translated by thought; nor for them to see with their hindheads, who sometimes see from their foreheads; nor listen to the spiritual knockings, who attend to the intimations of reason and conscience."

richardp69 said:
I'll wait as long as necessary as long as they are generous with the Nitrous Oxide. I might marry me a tank of that stuff. Better than Jack.
Click to expand...

Many dentists don’t offer it any more. I’ve had more horrifying dental work than 20 average people combined. No gas, no dentist: That’s my motto. 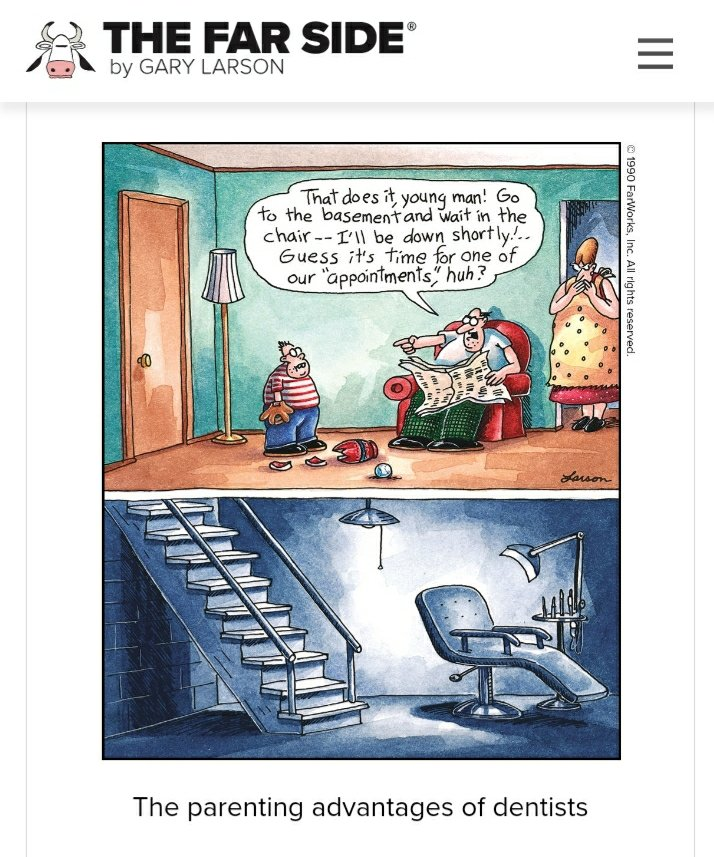 I have a very high tolerance for pain, but experiences with U.S. Army dentists traumatized me for many years. I still dread visits.
S

Remember dental work from Ft. Riley, KS when I was getting released, after my two years, about this time of year in 1972. I was a happy soldier!!

I went to a local place years ago when my dentist moved away. Cleaning, x-rays, and exam took almost 3.5 hours. Then they wanted me to wait in the waiting room just to process my payment. They got an earful and also a HELLISH YELP REVIEW!!! Then I met Pauline who runs my dentists office. He's such a nice guy with a great sense of humor. I never have to wait long. About 2 months ago I had an afternoon appointment and Pauline texted me, "had an emergency running about 45 minutes late, chill at home" and I did. I appreciated the heads up. Mostly they take me right in. Even when I'm not seeing the dentist himself, he always makes an appearance just to say high and usually share a joke. I was getting my teeth bleached a few months ago and when I had all this CRAP stuffed in my mouth and couldn't respond to anything, he popped in the doorway and said, "Oh it's him. Yeah get his teeth really white then maybe they won't notice how ugly he is." and he spun around and ran down the hallway laughing!! I almost choked!!