I haven’t heard of them before I got them last week from different brokers. The F5 was part of an unplayed collection and is beautiful, kind of like chocolate and caramel candy, I want to eat it. The F4 has a vey unique story, probably the best of any of my Guilds. I purchased it from the family of Tom Dreibelbis, Vice President of Dean Markley strings. He passed away a couple years ago. Dean Markley transported it back to his family in State College PA, along with other gifted guitars. I saw one from George Jones, and one from the Bellamy Brothers. Tom was the customer relations specialist for Dean Markley through the 90’s and worked with many artists he built a relationship with that gifted him guitars, where they remained on display at Dean Markley’s home office in Santa Clara California. Deana Carter received this from Guild, being a Guild girl, in 1996 when her debut album sold 4X Platinum, and “Stawberry Wine“ became her #1 hit. She gifted it to Tom in 1998 just before her second album was released. Tom’s family wanted to pass these guitars on to collectors. Odd thing is they only wanted $500 and free shipping. I’ve got two unopened ‘96 and ‘98 cds, sealed flyers, and a large uncorrected marketing proof for her second album from her and the Dean Markley strings add from then.
I was looking for gifts for my son and daughter’s birthdays this summer. I got the F4 first for my daughter. She grew up out here listening to Deana Carter and always asking me to play Strawberry Wine. Jordan has been playing guitar since she was 10. I hope she will like it this August. I wanted the big brother F5 my sons birthday, though never expected to find one like this. He has a small collection already. The Guild retails were: F4CEHR was 1199.99, and the F5CEHG listed at 1499.99. Not that I’m a Guild expert by any means, but odd I’ve never heard of this model before, must not be many out there. 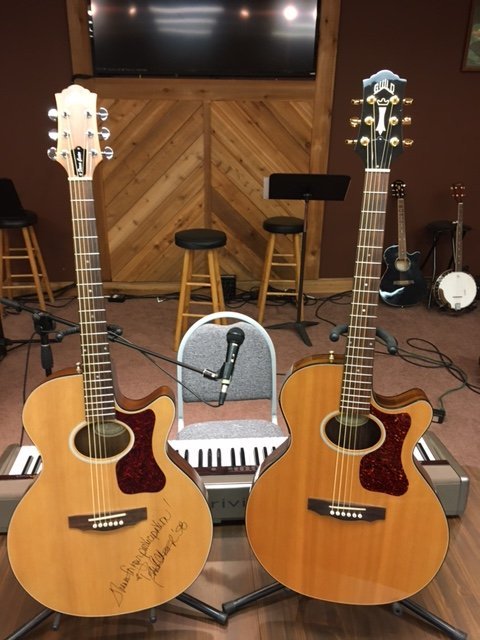 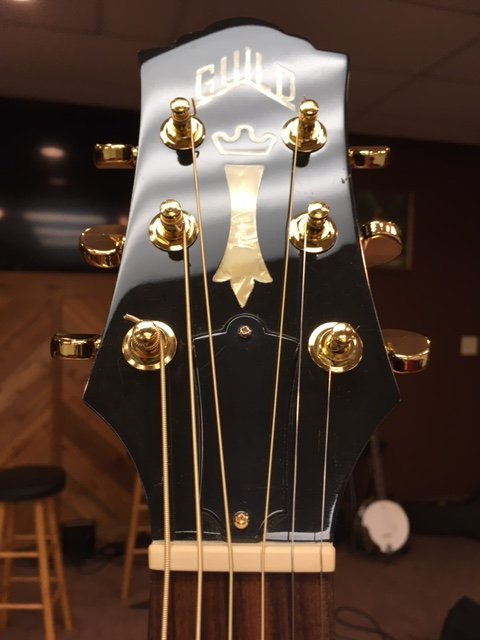 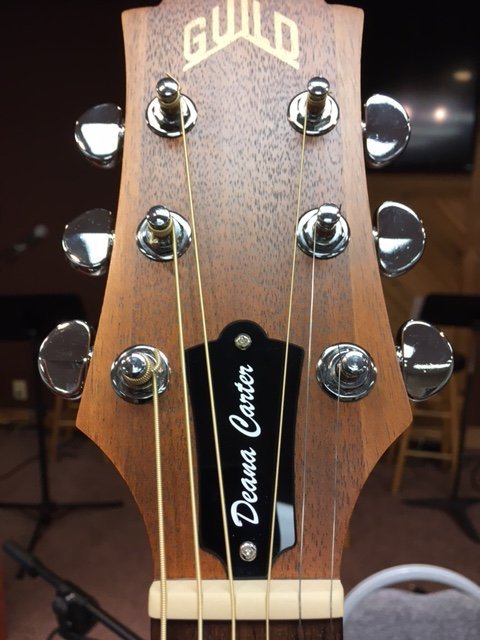 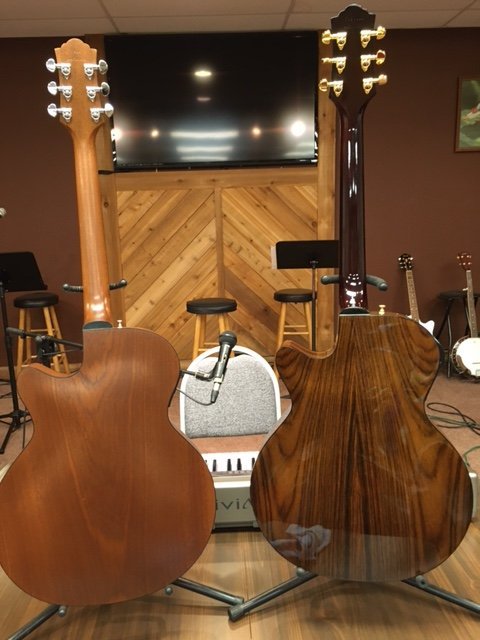 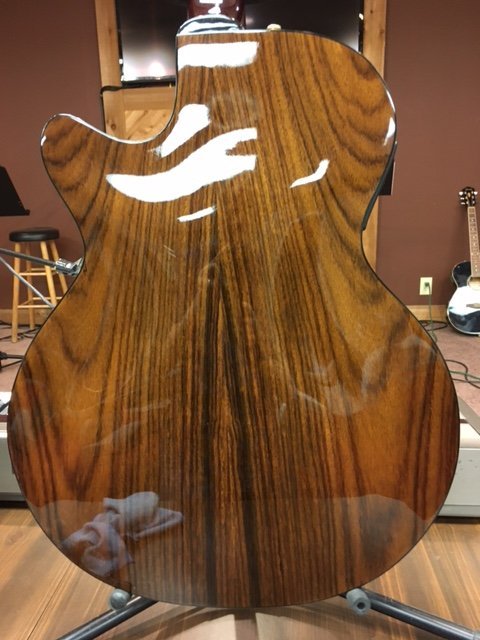 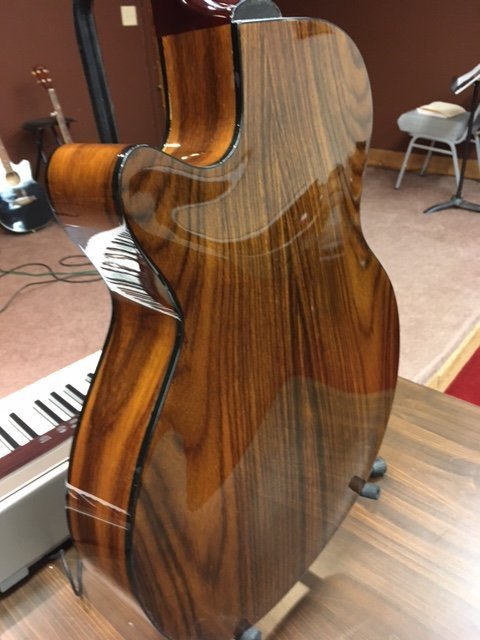 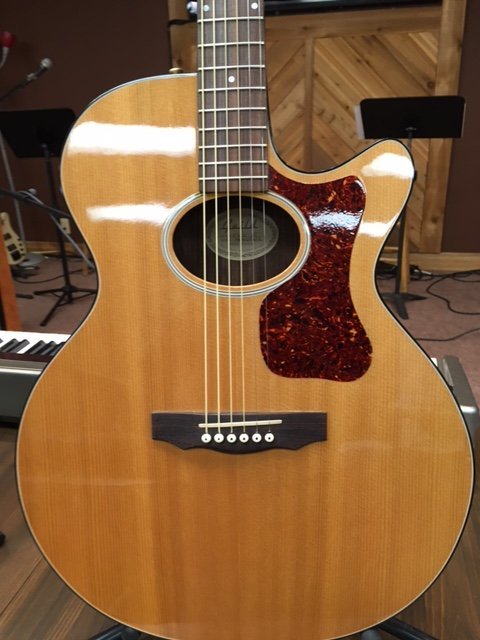 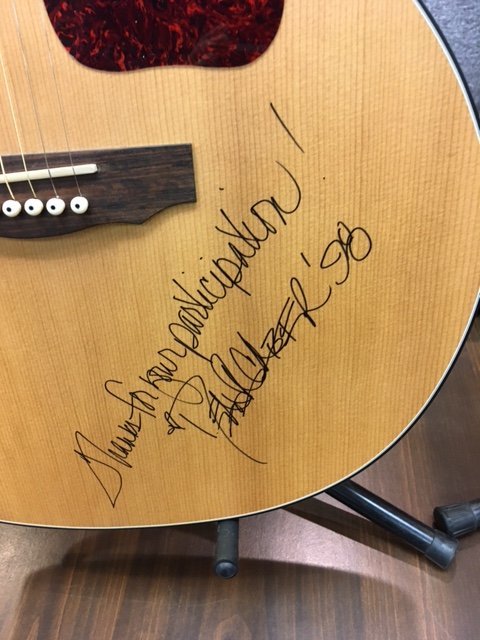 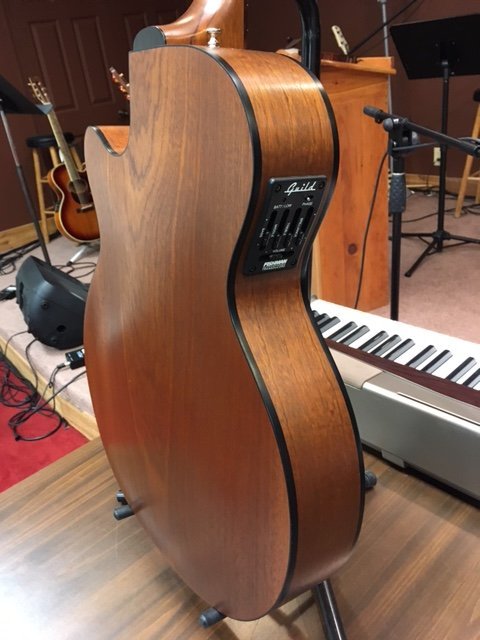 That is very cool! Do you know what Carter's signature and note means? i.e., "Thanks for your participation"?

walrus said:
That is very cool! Do you know what Carter's signature and note means? i.e., "Thanks for your participation"?

The Dreibelbis family told me Deana Carter and the other artists were thanking Tom by gifting him guitars because he always kept them up in Dean Markley strings, and was always available when they needed him.
Here’s the memorabilia I got. pretty cool. All sealed. I really like the marketing strategy on the proof If you read it, along with the second cd that would eventually be released and went gold. This is original extra copy that had no scribble or corrections made during the meeting when they all got together to approve the eventual magazine installments. Isn’t that crazy? They want $2000 for the George Jones gifted guitar, and $2000 dollars for the gifted Bellamy Brothers guitar. But neither of those were their guitars. George Jones never played an imported Washburn that I know of, and not sure but I dont think the Bellamy Brothers played an imported Samick, but who knows. At least this Guild is the real deal, and a personal gift from her that has a deeper bond. Since the the other two artists are icons, I guess they didn’t think Deana Carters signature carried much weight, only worth $500. All that said I just really like the guitar and mainly got it for a birthday present for my daughter. I like the Guild Starfire shes holding on her second cd cover. 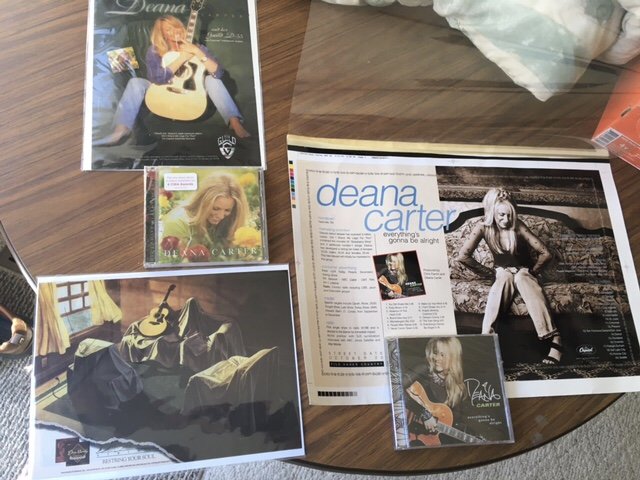 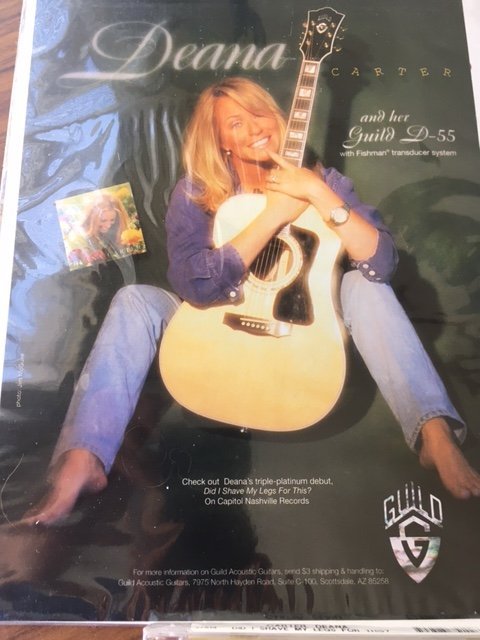 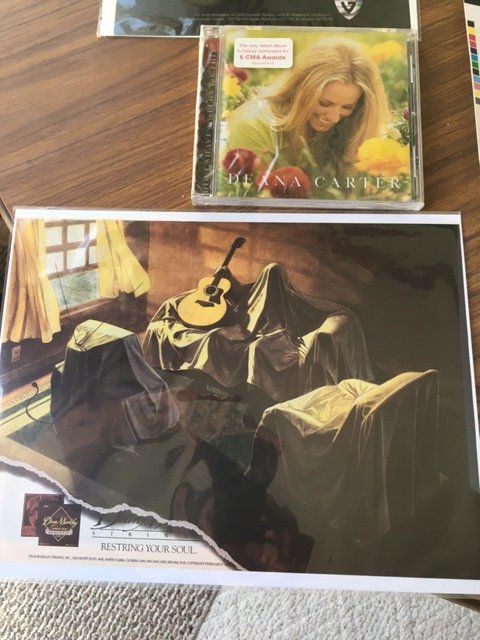 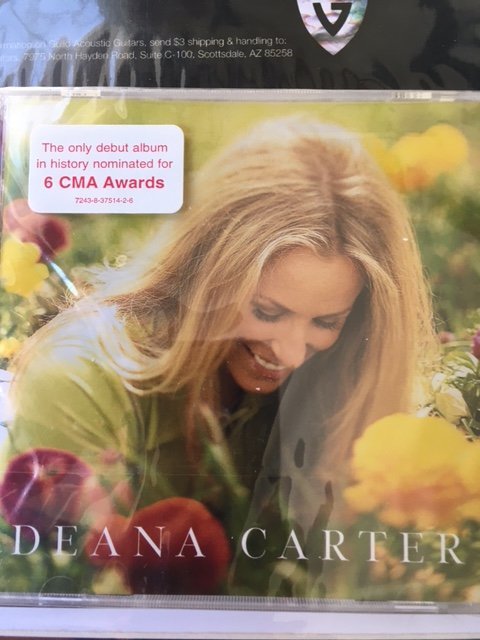 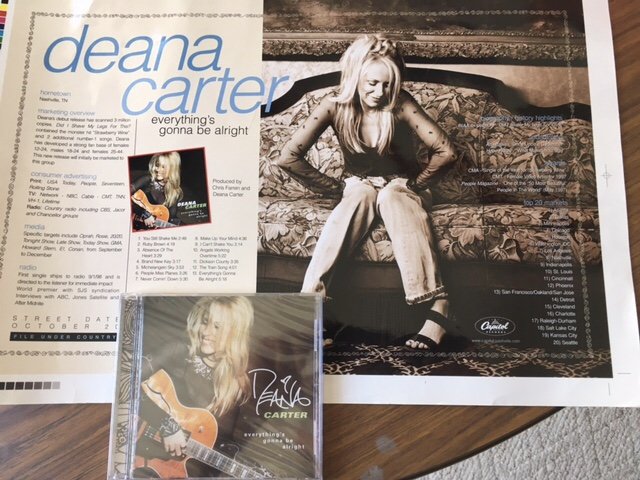 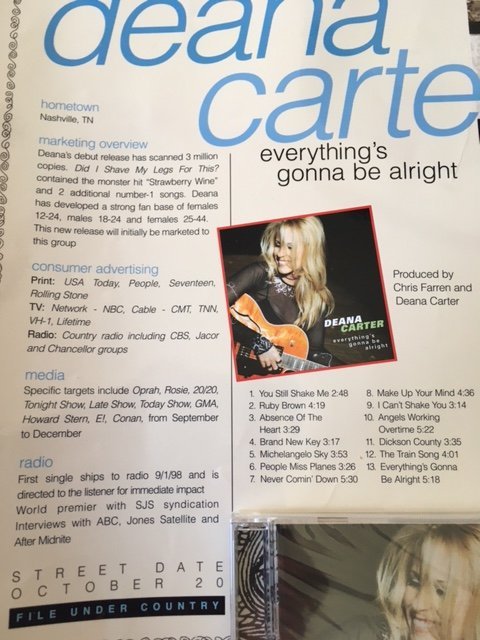 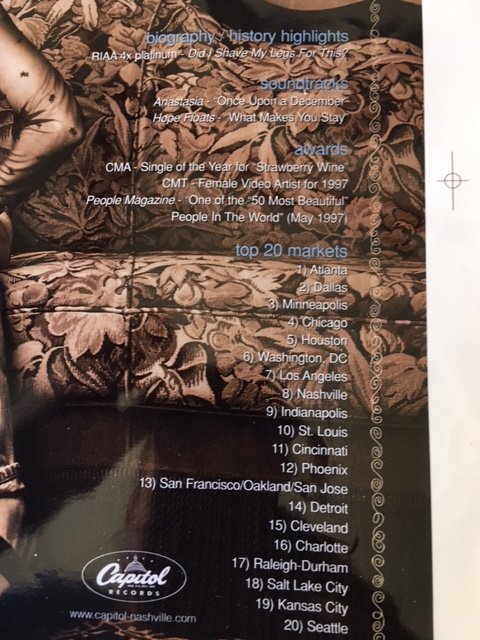 Great scores and a most excellent story. Thanks for sharing. Lucky kids!

PreacherBob said:
I like the Guild Starfire shes holding on her second cd cover.

Actually, that's a Guild X-170 she's pictured with on the CD cover; a Custom Shop X-170 to be more precise!

hansmoust said:
Actually, that's a Guild X-170 she's pictured with on the CD cover; a Custom Shop X-170 to be more precise!

Awesome! Thanks Hans. Now when I show it at my daughters birthday party, I can introduce it as the custom made X170! I’ve never been much of an electric guitar guy, I don’t have any. And being new in the Guild world, the only name I’ve learned is “Starfire”! That’s an awesome name for a guitar. I automatically in my head call all Guild electrics, Starfires

walrus said:
That is very cool! Do you know what Carter's signature and note means? i.e., "Thanks for your participation"?

looks to be Dean Markley was a sponsor and this guy Tom likely showed up at a number of performances and lent a hand. very cool story!

What's the back and side wood in the fancy one?

The F5CE HG is the higher end of these two F thin body models, in high gloss instead of hand rubbed satin on the F4. It has East Indian rosewood back and sides. With only 3” bodies and arched backs, it would shock you the sound and projection the both have. The hand rubbed satin F4 is really loud with great trebles. They seem to Guilds best kept secret