When I bought my NS SF-I, I kind of felt I had "settled": I couldn't come up with the scratch for a new NS SF-II (it had just come out, so there were no used ones around) and was offered a really killer deal on a brand new SF-I, so I bought it. For a couple years, now, I've been wondering if I should've have saved and waited. I mean, I'm completely in love with my SF-I, so shouldn't an SF-II be even more of a good thing?

Well, today I finally got an opportunity to spend a couple hours A/B-ing my SF-I with an SF-II: same strings, same amp, only the basses were different. I'll be danged if I don't kind of prefer the SF-I! OK, granted I have mine all dialed in to my personal liking in terms of action, pup pole piece height etc. and the strings are nicely broken in (pretty new strings on the SF-II)...but still. I was expecting the SF-II to win it by a slam dunk.

Sure, having the neck pup gives you a broader tonal range overall, but I'm not sure that, for me, that's sufficient compensation for losing the simplicity of the single pup configuration.

To be sure, there's nothing wrong with the SF-II. Nothing at all. And all these observations are subjective. I was just expecting it to really blow me away by comparison. Maybe this is just one of those situations where you fantasize too long about something and then wind up being somewhat disappointed because your expectations have been become unrealistic from too much anticipation.

Fun doing those A/B comparisons, isn't it? And, it's very satisfying when you realize that what you have is better than what's out there. See, the grass is greener on your side of the fence!

Thank you. I have resisted the lure of a SF II so far and it seems like I can continue to do so, at least until there is one in just the right, non-traditional shade of blue There is a lot to be said for simplicity of controls.

I used to set the volume full on and do something with the tone. If I had switches - max/min instead of pots I could live with it. I found the Curtis Novak was a little too hot for me and I started experimenting with backing it off just a bit. It turns out there there is a spot, slightly down from max volume, where it actually sounds cleaner and crisper. That got me curious and it turns out that there is a similar change for both the '67 and the NS. This makes me wonder if the volume control is relevant to the SF II experience.

That said, my main reason for backing off is when I am butchering Bach cello compositions. With 16th notes and a lot of chromatics clarity is king.

I appreciate your comment about expectations. For years I thought my grail was a 1970 or earlier M-85. When I finally played one (thanks, Grot) it turned out that, if I had to make a choice I'd stay with the '67 Starfire. I'd still like one but it is no longer the "at any price" obsession it once was.

Minnesota Flats said:
Maybe this is just one of those situations where you fantasize too long about something and then wind up being somewhat disappointed because your expectations have been become unrealistic from too much anticipation.
Click to expand...

Although I can't speak from experience, I hear it's the same way with marriage.

Yup, I've been telling you guys about the sweet-spot SFI basses for years. Relatively speaking, the pickup is in exactly the same spot as a P-Bass pickup is on Fender Precision, except you get a Bisonic on a 30" scale. What's not to love?

Minnesota Flats said:
Almost seems like they pulled the bridge pup tighter into the bridge on the NS SF-II than it was on the vintage ones. Looks like 3 slightly different locations on the NS SF-II (left), a vintage MIA SF-II (middle) and the NS SF-I (right):

I can't find the thread at the moment - and I really did try - but mellowgerman did some imagery analysis that convinced me that the SF I "sweet spot" pickup and the SF II bridge pickup locations were not the same for the '60's era basses. mavuser has added to that by showing that the bridge PU location is not the same on all '60's SF II's. His hypothesis is that some SF II's were originally built as SF I's and then converted in the factory and that others were Sf IIs from the beginning.

There is ample evidence that the NS line specs were initially derived by reverse engineering a vintage instrument. So the location difference doesn't really surprise me but it does make me wish I recalled the previous discussions more carefully.
W

Here is mine before I swapped the bridge out. 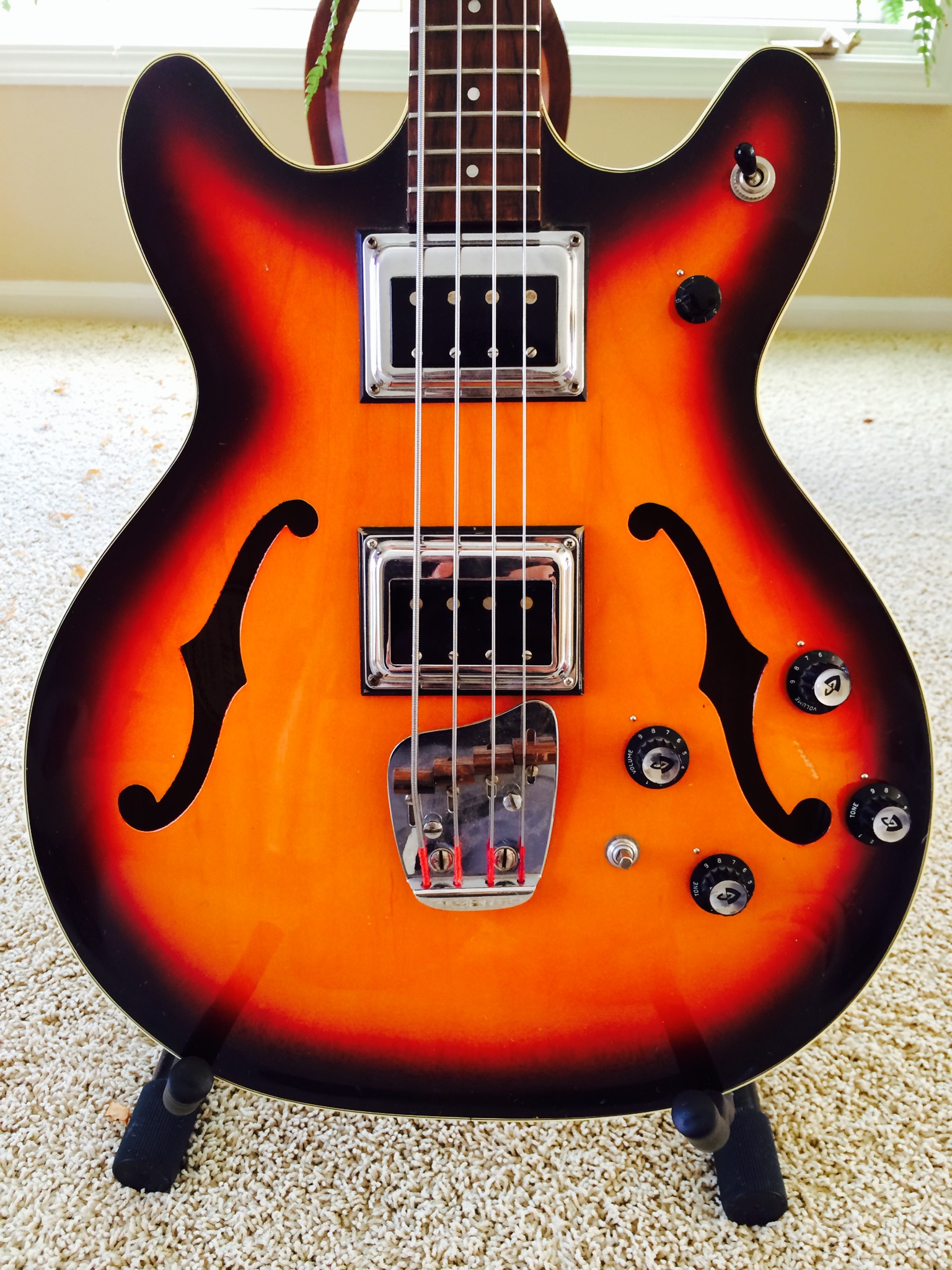 Yep, NS-I & II on left, 'bursts on right both vintage MIA: bridge pup all over the place:

Been playing the NS-SF-II some more and have to admit that I'm being seduced by it now that the flats are getting broken in. I don't necessarily "like it better", it's just seems different from the NS-I, still more so than I would've expected. IMHO, they are different animals, or at least enough of a variation on a theme that I wouldn't consider having both to amount to pointless redundancy. I'm being offered a killer deal on the SF-II, and my resolve is weakening.

I think we all know where this is going and I suspect that present company isn't likely to judge me too harshly. It's not as if one can have "too many Guilds", right? :friendly_wink:

Bridge pup positioning of three of the more notorious SF-IIs:

Lesh's pre-Alembicized SF? Harder to tell because of the "straight-across" bridge plate, but I'd guess that if it had been fitted with a "harp" bridge, the pup position would be the same as on Casady's.

Talk about trivia minutae, eh? Only here would anybody (though probably not EVERYbody even care)...

Yggdrasil was Jack's style of playing - his sound; not a bass.

What mgod is referring to (if I may presume, sir):

Interviewer: "On that album your bass is credited as 'Yggdrasil bass'. What does that mean?"

Jack Casady: [laughs] "I haven’t the slightest idea of what it means. We had a lot of friends at the time who were clever with words, and so I had a friend, Owsley Stanley, who would join the sessions from time to time, and I think he came up with that phrase as some sort of a description of the growling nature of what I was doing. So that sort of stuck."

The term is evidently originally from Norse mythology:

So did you get the SFII?
Impressions/pics after all this time?
Very curious to know how it all worked out.

I kept the SFI and also now have a beautiful Westerly SFII (courtesy of forum member Mavuser) which is loaded with "Guild Buckers". Lots of people seem to dismiss those as inferior pups, but I actually like them. To my ear, they're not so much "better" or "worse" than Bi-Sonics, just different. I think that the shallower body depth and higher ply count of the 1990s SFII top also contributes to the difference in sound.

I also have a Newark SFII as well and will say that over time I've developed much more of a taste for the neck pup than previously. Still like the bridge position too: it just depends on the context.

Thanks, And congrats on a 3rd SF bass!! I find my NSSFI the most comfortable bass to play ever for me.

RE Westerly:
I would not think the HB pups were inferior in any way, compared to my 2013 FMIC made Bisonic. I replaced mine with a Ricky HB1 humbucker and sounds great. My Bisonic was noisy and also cheaply built, YMMV. I hope the new Cordoba Music Group owners have upgraded the design since acquiring the GuildCo in 2014.

RE NSSFII:
How do you find the SFII bridge position sound vs. the SFI bridge pup pos? Brighter? Duller? Burpier sounding or smoother?
Last edited: Jan 21, 2020

lungimsam said:
RE Westerly:
I would not think the HB pups were inferior in any way, compared to a pre-Corona NSBisonic. Truth be tolde, I don't think there is anything special about a pre-Corona NSBisonic. I replaced mine with a Ricky HB1 humbucker and sounds great. My PCNSBisonic was noisy and also cheaply built, YMMV. I hope the new owners have upgraded the design since aquiring the GuildCo in 2014.
Click to expand...

I'm confused. What are you talking about? Even if you meant Cordoba instead of Corona, the Newark Street SF I with "Guild Bisonic" was designed, built and released while FMIC owned Guild. The "pre-Cordoba" Bisonic would thus be a vintage, Hagstrom PU dating from approximately 1965-1970. There is no evidence I have seen or heard that the NS PU design has changed since it was first introduced. It's possible it has been redesigned since 2013 but no one is talking about it at LTG.

Since we have had different opinions on these points I would like to express my opinions that:

The NS Bisonic in my SF I is no noisier than my vintage Bisonic. Both may be noisier than you can tolerate for your applications but I will deal with the noise to get the sound I want for mine.

If you prefer the Bisonic sound then the vintage Bisonic or the Novak DSBS both capture the sound better than the Newark Street Bisonic, in my opinion, backed by owing and playing all three. If you don't favor the sound then there are many other choices. When I, and others, say the the Bisonic is better than the Guild Humbucker we are really saying we prefer one over the other.

I should add to my previous comments that when I refer to "Bi-Sonics", I'm speaking only of the newer ones found in the Newark Street series. I have not had the pleasure of playing a bass loaded with vintage Guild Bi-Sonics, Hammons or Novaks.

The Westerly SFII referenced above: frono:
My bad. I meant "Cordoba", as you say. Also, I went back and edited my post and changed the designation to "2013 FMIC made Bisonic" for clarity.

Yes, acceptable levels of noise is a subjective opinion of the end user. I am glad your experiences with all you pups have worked out great for you. Sounds like you got some winners!! Thanks for your impressions of all three. The Novak sounds intriguing.
Last edited: Jan 21, 2020

Minnesota Flats,
Wow! That is gorgeous. Thanks for the pics.
I can't wait for Guild to come out with a new sunburst.
Love the way yours is bursted on the sides and neck, too.
Last edited: Jan 21, 2020
You must log in or register to reply here.
Share:
Facebook Twitter Reddit Pinterest Tumblr WhatsApp Email Link
Top