Thrilled by a Guild but don't wanna get drilled.

Hello lady and gentlemen of the forum. You all look lovely this evening.
This is my first post, so I am a little nervous. But not too nervous to ask a few questions about this Guild D-50 I stumbled across yesterday while browsing the aisles of a local pawn shop.
And you're gonna think I'm stupid, but I really cant describe the guitar to you. As with all stringed instruments I find interesting in pawn shops, I only got the model and serial number. I was going to use those numbers to navigate my way to find out every little detail about the guitar I could find. And this is the first time that method has gotten me nowhere.
It's got the paper tag inside the guitar that says that it is indeed a D-50 made in Rhode Island, but the serial number is a bit strange. It doesn't seem to jive with anything that has ever come from Rhode Island. And the guitar seems to be made from a "curly" type wood instead of all the D-50s I've seen on the web. I use the term "curly" for two reasons. One reason is because it reminds me of the curly maple my Rickenbacker 4001 is made from. And the second reason is because I know absolutely nothing about wood. And the back of the Guild is absolutely beautiful.
What makes me nervous is the possibility of it being fake. It doesn't seem to be made from the traditional wood the D-50s are famous for, and the serial number seems to not exist. The tag says that it is a D-50 and the serial number is D507905. But from what I've read, the Rhode Island serial numbers don't go that high. I may be wrong, but I don't know. That's why I came to youse guys. Here are the only images I have of the guitar. See how lovely that wood is? And it sounds great. But I haven't been able to find another D-50 anything like it. Can any of yall help a brother out? 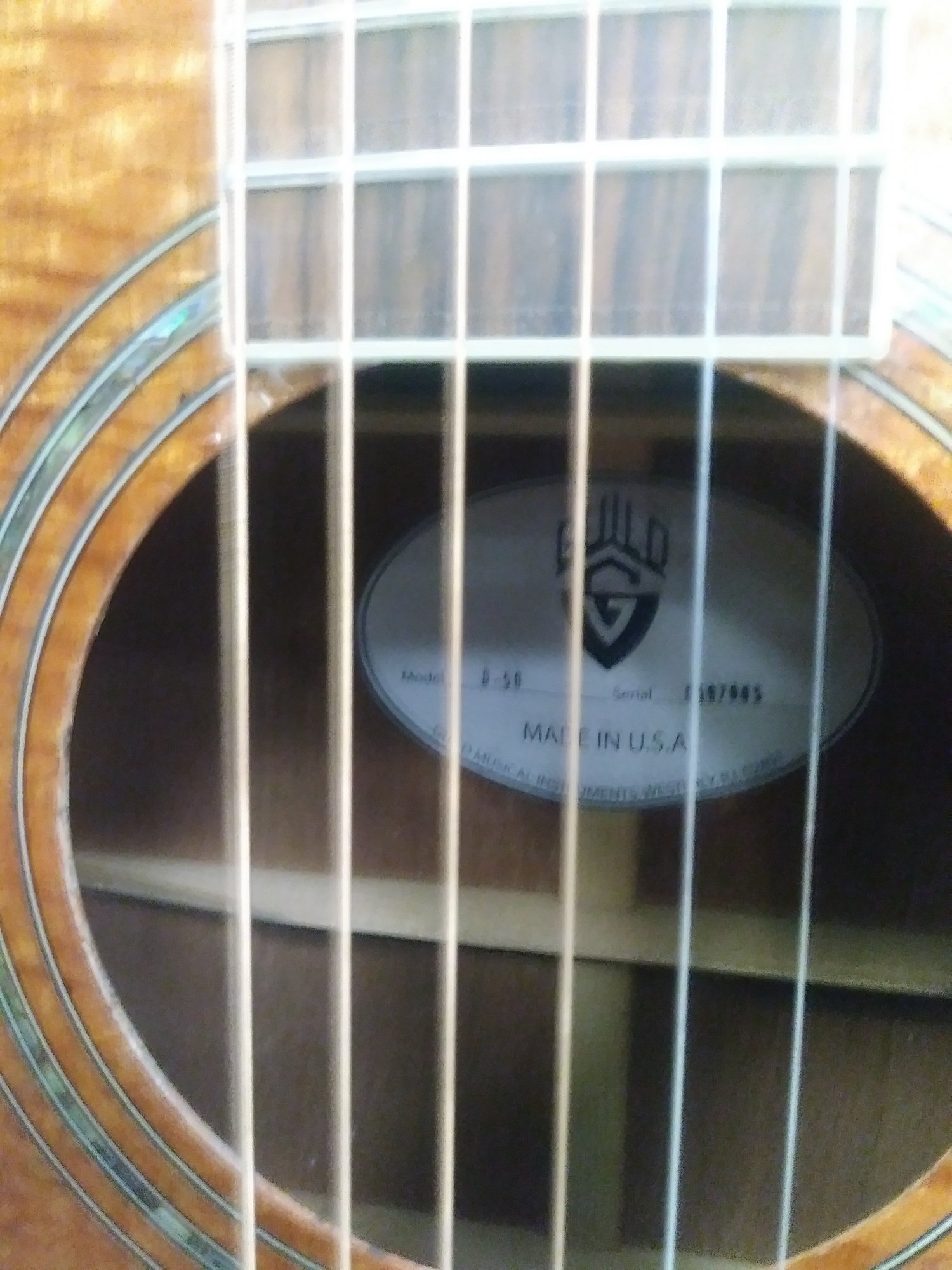 Welcome. That label looks very much like the label on a series of fakes that were often seen in Texas pawn shops.

We collected a bunch of them, but between photo hosting sites deciding to hold pictures hostage and a software upgrade the thread https://letstalkguild.com/ltg/index.php?threads/sellers-of-counterfeit-guilds.169766/ is less useful but the link to the news article about the probable perps still works..

But, if you want a "real" Guild then run away, fast.

Does it look like any of these? Total fake.

Sorry but that label is a cheap fake and it comes from a batch of known counterfeit Guild guitars that were being sold to pawn shops a few years back. As Frono says, run away!

Wow wow wow. Wow.
Sorry, but thats the only palindrome I can think of that can be applied to what I just read.
Holy crap. I hate this. And I am a little bit broken hearted. But I'm more angry at the people who do this kind of thing. And I guess I was kinda stupid for not noticing its counterfeitness. But then again, I only played it for a couple minutes. And the superior intelligence I displayed by joining this forum and asking the right people the right questions allows me to remain neutral. Not too stupid, and not too smart.
Man, I've got some old Gibsons and other fine electrics, so I should know the difference between what's quality and what's fake. But I know my guitars. I know what they weigh and how they feel.. I know the beauty of the design and the quality of the hardware...
Now that you mention it, the machine heads seemed cheap. But dammitt... That guitar sounded and felt good enough for me to research it.
Those punks. These are the kind of people who need to be disemboweled with a wooden cooking spoon in front of their children and left bleeding in the moonlight.
Man. I honestly don't know what I would have done if not for yall. Would I have played it and looked at it long enough to notice the cheapness? Or would have I just handed over the cash before anyone else could?
Frono, you saved me, man. And at first I thought you were joking.
But you and people like you, are golden. Yall are the whole reason people like me are given a second chance. And maybe I can pass the knowledge on to someone else.
And now I've got to find a real D-50 so i can still have something to talk to yall about.
Thanks again, man. You saved the day.
I plan on going by there tomorrow, so I'll definitely take some pictures.

Wow Sal. I think it looked a lot like those. I remember being unimpressed by the headstock. After reading what I read about the D-50, I remember thinking that the headstock seemed almost soft-looking. Like an Epiphone to a Gibson. And the average price of a Guild would demand a nicer headstock. I would expect near-royalty.
But I plan on going by there and taking some pictures. I'll let yall see what I almost bought.

Oh, and happy 10th anniversary, Sal. You joined exactly 10 years before I did.
So that makes me 10 years younger.

Keep looking for a nice Guild. They are great guitars and a good bargain compared to the Martin$ and Gibson$.

If you go back to the shop tomorrow the owner might like to see Frono's article. At least they caught the guys.

Here's another story on the counterfeiters.

Welcome, Anubis . . . may I ask how someone from Texas happened to choose an Egyptian deity as their screen name?

Also, keep an eye on the "for sale" threads here at LTG. Without a doubt, someone will be selling a legit D-50 that might make you smile.

Glad you got the info you needed Anubis, before you purchased!! As soon as I saw that label, I thought, "Uh oh!!" Westerly, Rhode Island Guilds are super nice and they were in that factory the longest. But as has been said, the labels don't look like that at all. To my knowledge all Westerly labels are oval and more brown with that leaf motif around the outside and the model and serial numbers are always hand written. Just for comparisons sake here's one of mine. They bought a new pen that day and wrote really clearly but still written by the human hand. 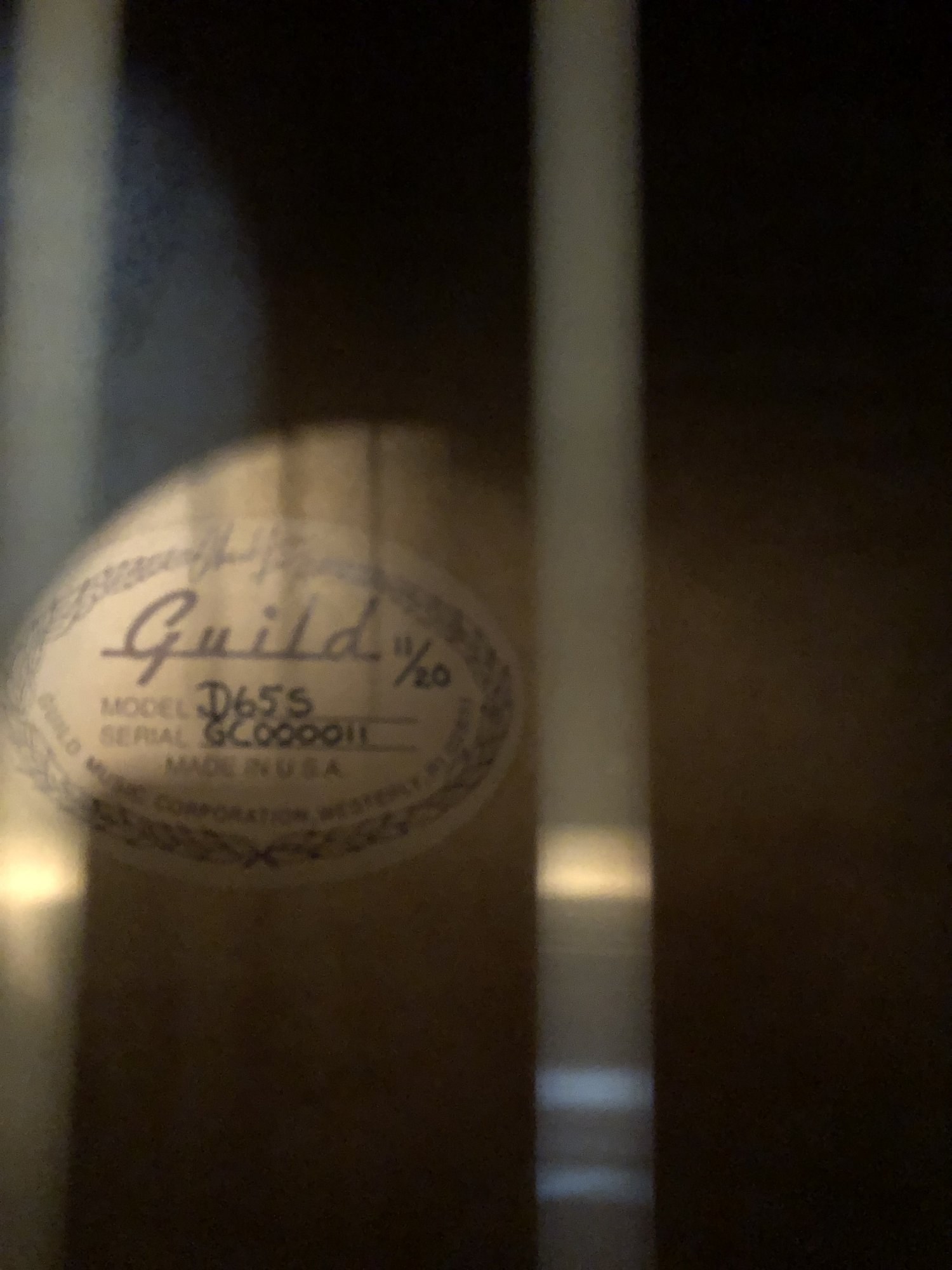 And Tom's totally not showing off by using his D65S as an example.

Well, @GAD I only have the TWO Guilds! Not like I have thousands of choices, like SOME people. Would the DV-72 have been a better choice?? Just wondering is all.....
W

If I had one of those I'd show it off too!

No one's even mentioning that the 'curly' wood is not a top wood for a Guild dread...or most of them, anyway.

To the OP...if you liked the way whatever it is sounded and played...if they made it cheap enough and sold it as what it is...just not a Guild...

davismanLV said:
Well, @GAD I only have the TWO Guilds! Not like I have thousands of choices, like SOME people. Would the DV-72 have been a better choice?? Just wondering is all.....
Click to expand...

You know I'm the last person to be throwing stones! My house isn't made of glass - it's made of leaded crystal!

A Guild of the Westerly, RI era will also have the serial number stamped on the back of the headstock.

Keep us posted on your hunt.

I keep looking at the closeup of the rosette!! Does it look to anyone else to be a decal??? I mean on the one shot it looks like a perfectly concentric and concise shadow like it was laid down over wood. Am I trippin?? Again?? just wondering because i see that and it's not that inlay is that expensive these days but on a fake? Look at the second photo..... What's that about?? 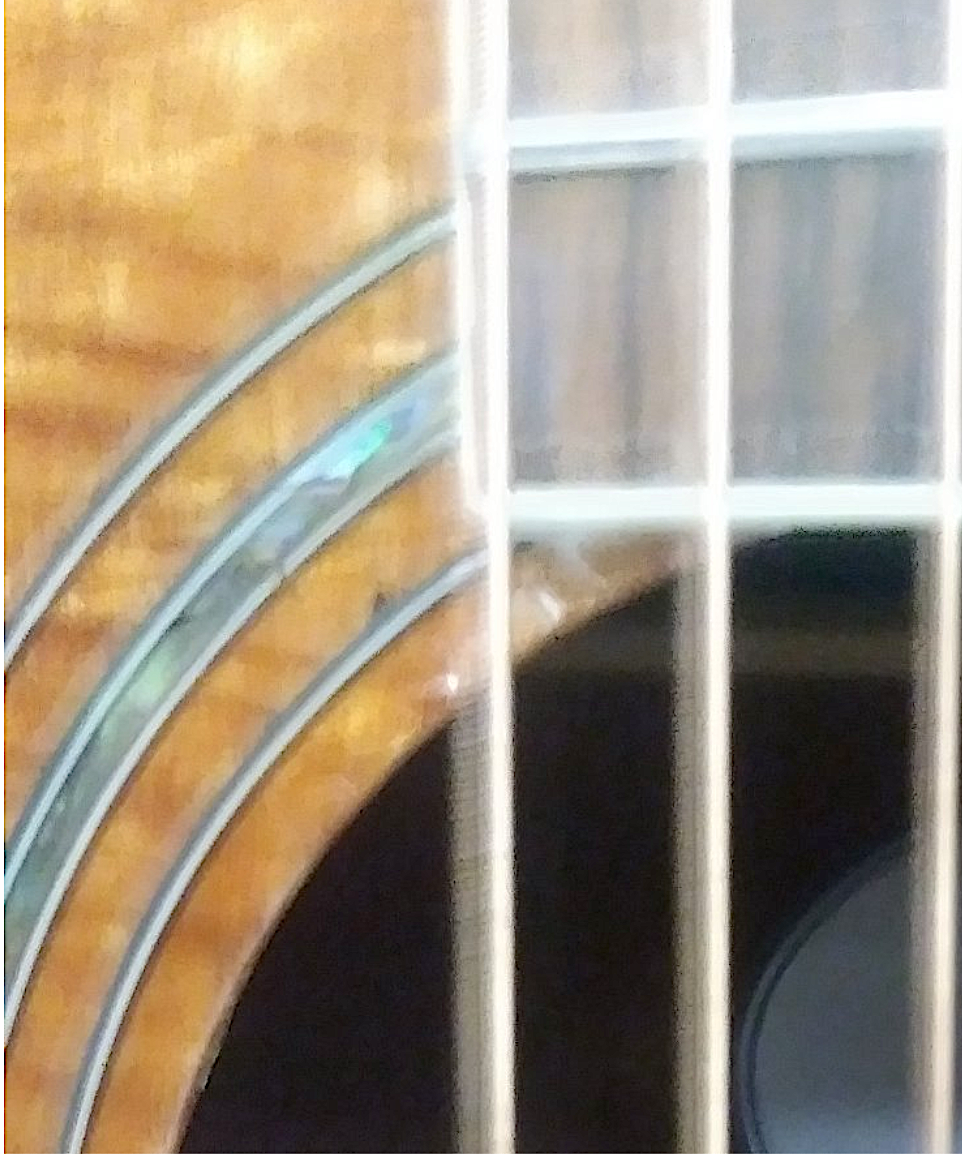