The thread I started about Sex Wax and Wig glue veered terribly into a discussion about picks. Guildedagain's comments got me to thinking about our little friend, the pick. He's something we all use, some of us obsess over him, others give him little thought. A few have no use for him. We buy, trade, borrow and lose him, and often when we find our long lost little pal, we say "ahhh, there you are". We often always have him in our pockets, and our in our cars ashtrays (pick trays), and under the seats and floor mats. He almost always hides in-between sofa cushions or underneath chair skirts. He can be formed of plastic, vinyl, bone, metal, leather, felt, shell, or some other one of dozens of materials we have found. He loves to play hide and seek in our sound holes, so easily finding his way into them, and so difficult to find his way out. He's thick, he's thin, he can be dull, or often has a good point. Tear dropped, triangular, symmetrical or custom shaped, it doesn't matter. He can be had for under a nickel, or, for more than $30. He's all the same, but he's not. He makes a thief out of all of us...seriously, is there anyone who doesn't like leaving GC with one or two in our pocket? We all have found that special pick that makes our guitars sing like the choirs from heaven, and we don't know why.

So, this is a thread about our little pal, the pick. If you post, post about only one pick at a time. Tell us about the pick(s) that have passed though your musical life....the good, the bad, the ugly. I'll begin with a pick that has passed through almost all of our hands at one time or another...I'll call it the standard by which picks are held to: 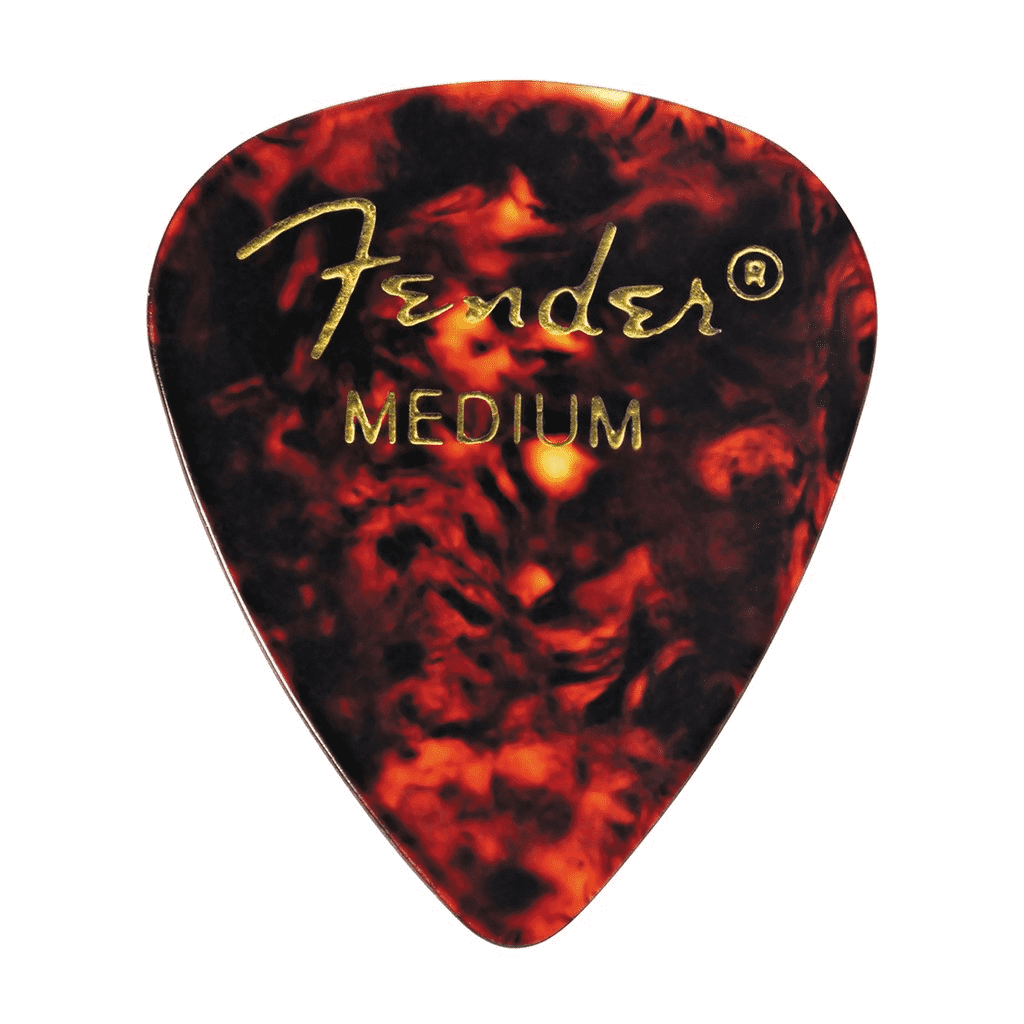 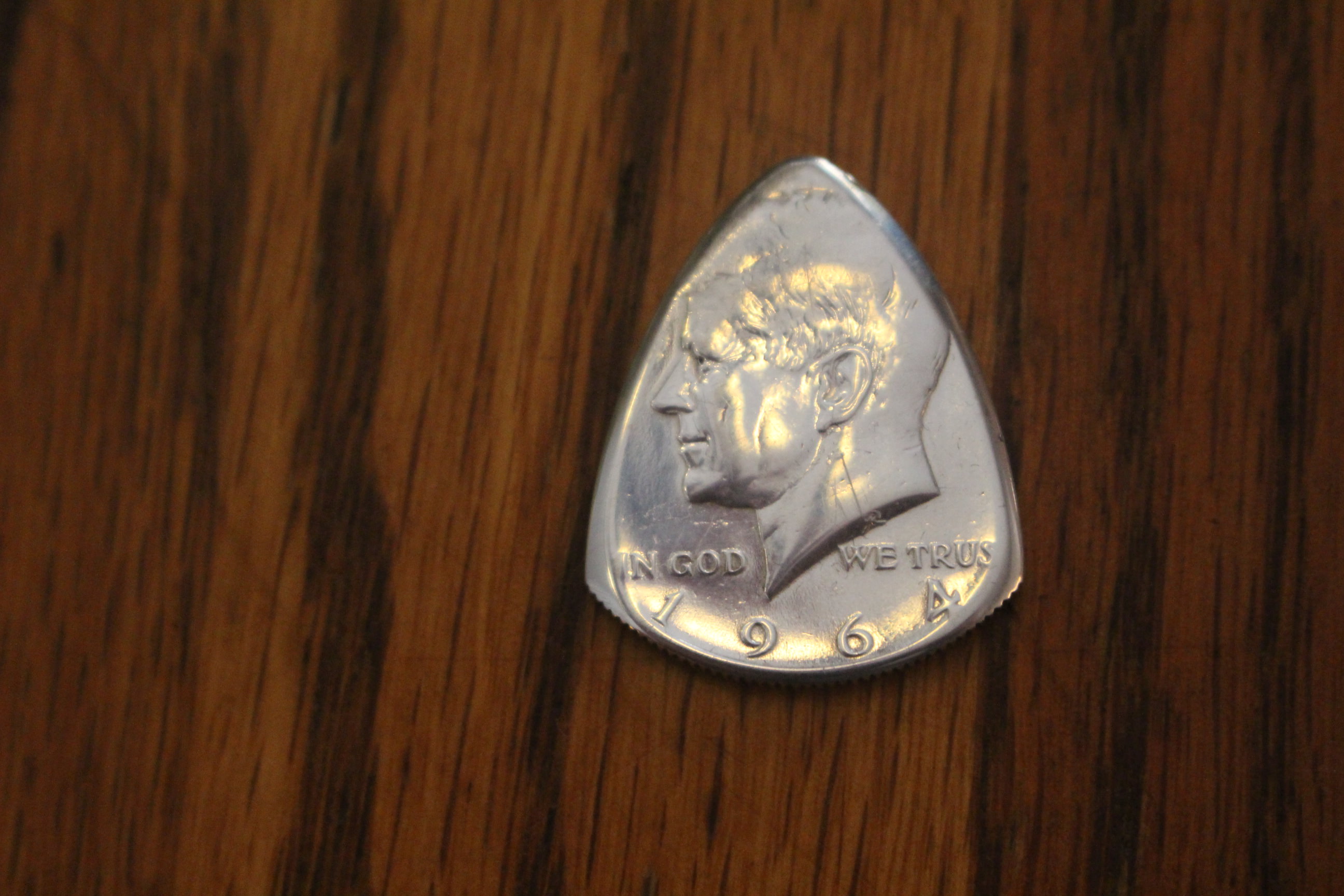 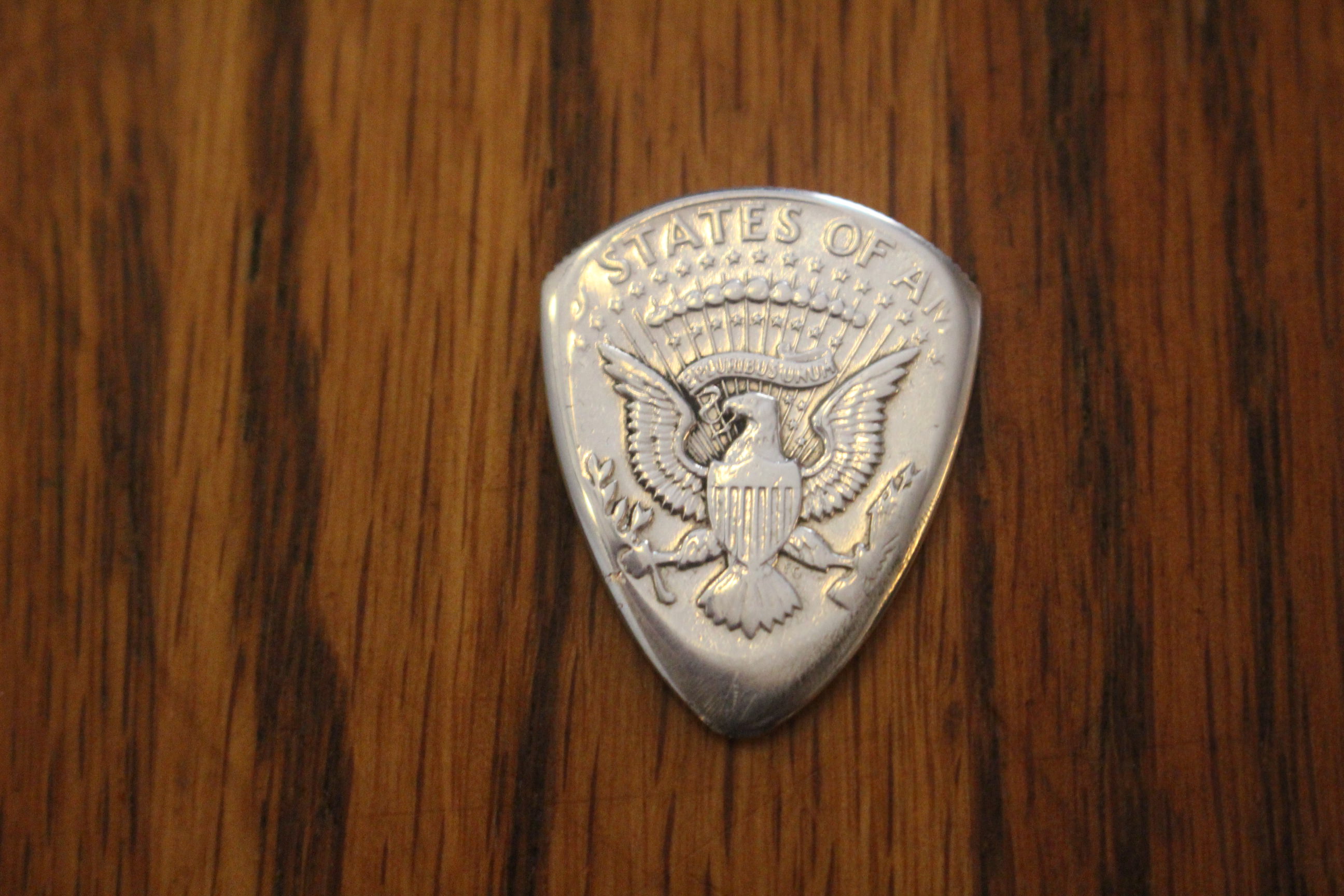 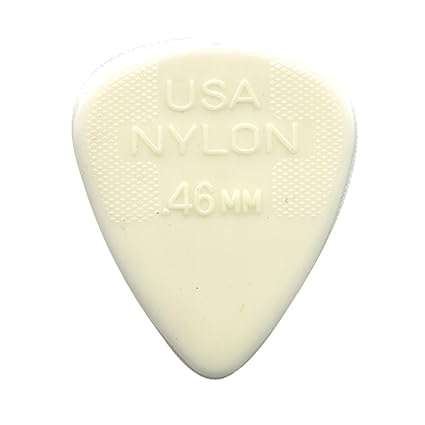 Little bit of give for fast strumming, doesn't slide around between your fingers, and never breaks like celluloid (at least the old nylon didn't, but they changed to something a little more brittle a few years back)

After trying MANY, I am using a Dunlop Primetone .73. Love the sound - smooth and clear with little pick noise. And I love how Ultex sort of "sticks" to my fingers.

Man, I'm glad you started this thread. Reads almost like the intro of the pick book, that unsung hero, the pick. Comments on the back of the book from Chet Atkins and BB King.

True that on the brittleness of the ultra thin Dunlop (RIP Jim), I've had them disintegrate while playing, breaking the edges off on three sides, but I attributed it to aging of the picks?.

Man, that's quite the Kennedy half dollar pick, that is really beautiful.

I take it you know that the Rev. Billy Gibbons uses an old quarter to get his tone.

Guildedagain said:
True that on the brittleness of the ultra thin Dunlop (RIP Jim), I've had them disintegrate while playing, breaking the edges off on three sides, but I attributed it to aging of the picks?.
Click to expand...

Nope, the new nylon's a different color too (lighter than the original stuff), and doesn't wear down like the original stuff did.
38's used to be discernibly grey too, now they're "white" and the 46's look as light as the old 38's.
I noticed it around ten years ago I think, was running low, bought a bag of 5 and when putting 'em in with the old picks saw the difference. Started using the new ones first and noticed the difference immediately.
The old ones lasted forever, they'd just wear down slowly until they were finally too round at the tip for me to use anymore.
Also Nylon doesn't get from aging outgassing it gets brittle for a whole different set of reason which only just now learned about:
https://www.plasticstoday.com/materials/materials-analyst-part-85-fixing-brittle-nylon-product-water/141225133500.
Methinks the explanation for Dunlop's more brittle picks is in that essay.
It discusses methods of improving the "toughness" of molded nylon parts.
"Most nylon polymers, including those used in the largest volumes, nylon 6 and nylon 6/6, have an unusual affinity for water."
"While rapid moisture conditioning is a legitimate method for improving the impact resistance of nylon products, there should be concerns with using it indiscriminately. A nylon product may be temporarily brittle while it comes to equilibrium with the atmosphere. But it may also be brittle because the material has been degraded during the molding process. In such situations, the brittle condition is not simply a temporary symptom of low moisture content, but rather is a permanent condition brought about by reduced molecular weight."

So, Nylon actually absorbs water and the amount of water held by the material, can be artificially increased by soaking it in water which will increase flexibility, but it inevitably reverts back to its original moisture content in ambient conditions, much like the moisture content of wood stabilizes according to ambient humidity:
"The problem is that this shortcoming can be covered up by pumping large amounts of moisture into the polymer. Under such conditions, the polymer becomes sufficiently flexible so that it no longer appears to be brittle. But a moisturizing process that is performed rapidly often introduces more moisture into the polymer than it can retain in the long term. If this happens, then when the excess moisture comes back out of the polymer, the brittle condition can return, usually after the part has gone into the application."
So while I think they also changed the nylon, it may be that they're not treating the new stuff properly to maintain the characteristics of the old stuff.
In the meantime I guess I have to start humidifying my picks.
:eek-new:
Last edited: Nov 4, 2019

Yep, this is true.

My BIG Stihl FS-85 dinosaur handlebar weed/brush whacker takes three plastic blades, which last way better if you keep them soaked in water before use. Old trick that landscapers know. 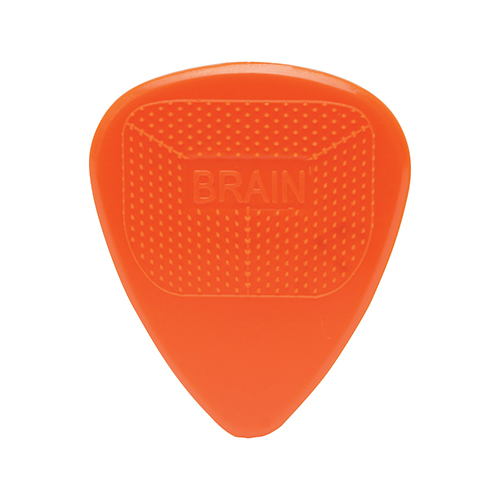 Guilded, I also have a 1954 US Quarter silver pick (my birth year) but it is considerably smaller than the half dollar. I keep that one in my mandolin case, works perfectly for that.

Guildedagain said:
Yep, this is true.

My BIG Stihl FS-85 dinosaur handlebar weed/brush whacker takes three plastic blades, which last way better if you keep them soaked in water before use. Old trick that landscapers know.
Click to expand... 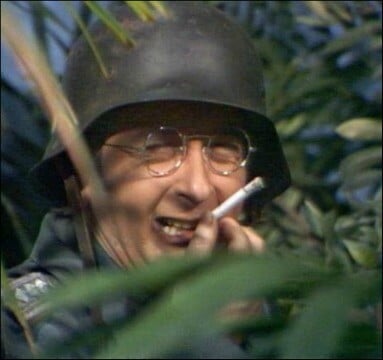 That is interesting about nylon absorbing water.

As for pick choice, I tried a blue Tortex decades ago and ever since they're the only ones that feel right to me. I don't know how thick they are; I just know they're the blue ones. Way stiffer than nylon, but when strumming I tend to use my finger nails or a combination of pick and fingers at the same time.

I like a Tortex pic too. The mat-finish seems to be all I need for grip. Keep a few loosely taped to your mic stand in case of a drop.
S

Another one of my favorites are the Dunlop Gels....I use the Heavy. Feels really nice on the finger and on the strings, gives clear, crisp tones, and provides great separation of the lower strings when playing up near the neck. 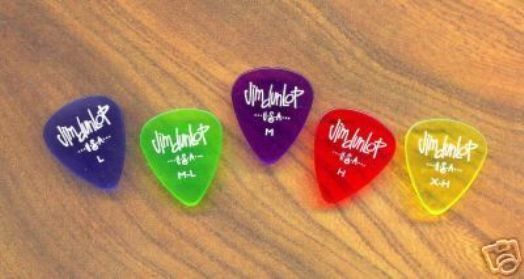 Blue Chip and V-picks and Gravity as well. BC are my fav.

JF-30 said:
Blue Chip and V-picks and Gravity as well. BC are my fav.
Click to expand...

I got a couple of Blue Chip used a few years ago, I like them, but not sure they're worth the money new. My go to pick lately is a gravity pick.

still this one for all leccies: 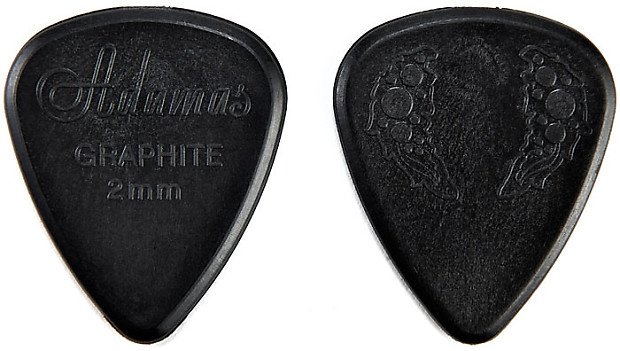 Wow, I've never seen one of those.
M

walrus said:
After trying MANY, I am using a Dunlop Primetone .73. Love the sound - smooth and clear with little pick noise. And I love how Ultex sort of "sticks" to my fingers.

Yes this one. I bought a handful of Gibson medium picks (made of "Eboneen") in the 70s and they were the ultimate for me. When I was down to the last one a couple of years ago I had to start my search all over again and finally found the Ultex, which are great for my Ovations while the Orpheums prefer the Primetones.
M

krysh said:
still this one for all leccies:
View attachment 76
Click to expand...

I have picks of stone, glass, silver, wood, pre-ban ivory, steel, brass, and of course all the various plastics, nylons, tortex, etc. etc.