Dave married January 1957 Playboy Playmate of the Month June Blair who also had a television and Hollywood career.

Naturally she became a regular on the show as Dave's wife. 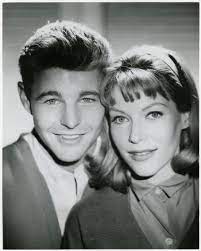 The things I learn on TCM.

I remember Tthe Ozzie and Harriet Show well. The show was about the wholesome Nelson family from NJ. I remember Ricky always singing a song at the end of the show. I remember Wally, I believe he was David's best friend, could have been Ricky's.

Al, I didn't realize that David's wife was a Playmate. They really hid that. In those days that was a big deal, now not so much.

Ozzie in real life was not that nice of a guy, definitely not like the guy portrayed. I beieve he was abusive to his family. Harriet, was a Las Vegas show girl. Ozzie was not her first husband. Ricky, had drug issues, which led to his demise on the DC3 that crashed. Never heard too much about David, I believe he was a successful Hollywood producer and a decent guy.

Funny how those old family portrayal shows, were different than real life, another example the Robert Young Show.

adorshki said:
Dave married January 1957 Playboy Playmate of the Month June Blair who also had a television and Hollywood career.

Naturally she became a regular on the show as Dave's wife.

The things I learn on TCM.
Click to expand...

I remember them along with Robert Young in Father Knows Best. Sky King, Penny, and the Songbird.
Think there is a thread about all the old shows.

Ozzie was a successful bandleader in the late 30's and early 40's, and Harriet was his girl singer. I have some of his recordings. The band was pretty good. I think Ozzie just stood in front, waving a baton.

Robert Young from Father Knows Best was a drunk. So was William Frawley from I Love Lucy. He only got the job because he promised Desi Arnaz he'd stay sober.

Well, Ricky did have a coupla tunes even I like:

From which I hear the intro to Johnny Rivers' Memphis:

And the bass lick for "We Ain't Got Nothin Yet":

And even influenced Deep Purple's "Black Night" (which I always used to think borrowed the Blues Magoos lick!):

This little user-produced mini-doco showed up while I was looking up those Ricky vids:
https://www.youtube.com/watch?v=QUlbWIjTzPE

I only caught the show in re-runs, not really one of my faves, and only became aware of "Summertime" recently.

And never really warmed up to "Garden Party", but understand it's got an interesting backstory.
Last edited: Sep 27, 2021

I remember watching first runs and always wondering why he closes his eyes so much while playing.

Everyone chooses their partner. I don't see anything unusual about marrying a PlayBoy playmate, even back then.

silverfox103 said:
Al, I didn't realize that David's wife was a Playmate. They really hid that. In those days that was a big deal, now not so much.
Click to expand...

Yes, "now not so much" that if they were around to today in a "reality" TV show, they would have a camera crew film them on video tape and then leave the tapes out for the dishwasher repairman to find, steal, and leak to the Internet in the hopes that they would soon be on the front covers of all the gossip rags at the supermarket checkouts and that they would soon be the hottest topic of conversation on all the afternoon TV talk shows.

Yes, funny, but I am not sure which version of fake, 50's squeaky clean fake or today's sleaze fake, is worse.

Edit for faulty diction: Yes, funny, but I am not sure which version of fake, 50's squeaky clean fake or today's calculated sleaze, is worse.
Last edited: Sep 27, 2021

Rich Cohen said:
Everyone chooses their partner. I don't see anything unusual about marrying a PlayBoy playmate, even back then.
Click to expand...

I once worked with someone who had been an astronaut and flown several Space Shuttle missions. One day, while acting as a mentor at a breakfast meeting, he talked about the importance of "professional reading". He had a manila folder in his hands and as he talked he held it up and edged up the contents so the audience could begin to see what was in the folder. The punch line was that this particular "professional reading" was an issue of Playboy that just happened to have an article about one of his Shuttle missions that didn't go as planned. "I only read it for the articles".

fronobulax said:
The biggest change, IMO, over the decades is that in 2021 we might add "quaint" and "outdated".
Click to expand...

This year's Grammys and MTV Awards shows were more pornographic than Playboy ever was. "Quaint" works very well.

Rich Cohen said:
Everyone chooses their partner. I don't see anything unusual about marrying a PlayBoy playmate, even back then.
Click to expand...

Playboy was still being sold under the counter in most places in 1960 and even banned as pornography in some communities, Hefner was still fighting hard for "respectability" and "I only read it for the articles" was the standing joke.

Note for example no mention is made in these press releases of the Playboy appearance although today it'd be considered akin to winning a beauty pageant worthy of mention: It occurs to me Blair may actually have been one of the actresses who helped it gain "respectability".
Last edited: Sep 27, 2021

adorshki said:
Playboy was still being sold under the counter in most places in 1960
Click to expand...

I remember Playboy had to be sold in a sealed envelop; either to protect people who found it offensive or to keep prying eyes getting free looks at the goods

Yeah it was actually always pretty much a last resort for me growing up with TV in the '60's, like when there was nothing else but news and soap operas on, for example. And like 6 channels in '64, think it might have hit 9 when UHF stations came on strong. Once in a while even picked up Sacramento and Monterey. Back when the airwaves were relatively uncluttered.