Oh, I know the story and topology quite well...but still seems strange that a 33 watt RMS amp is as heavy as an 87-135 watt amp!

Bill, I know you know what the Story is, but I cribbed this info from a Sweetwater article, thinking it might be of assistance to somebody new to the game, 'further down the line', stuff like that:

Q: Could somebody please tell me what the difference between a Class “A” and a Class “AB” amplifier is and how it relates to guitar?”

A: To answer that question in detail, we have Mitch Colby, senior vice president of Product Development and Support at Korg U.S.A. (Vox and Marshall’s U.S. Distributor). Here’s what he has to say about it:

“In order to understand the difference between these two types of amplifier designs (there are others) you must first understand a little about tubes.

The most basic tube used as an amplifier consists of three elements: Cathode, Plate and Grid. The Cathode is heated (by the heater, another element in all tubes except in very old designs where the cathode is the heater) and forms a cloud of negatively charged electrons. The Plate has a positive charge that attracts the electrons. The Grid is the audio input to the tube and usually controls the flow of electrons.

In a Class A circuit, a positive voltage is applied to the Grid, which controls the flow of electrons. In this circuit design current is flowing at all times through the tube. In a Class “AB” design a negative “bias” voltage is applied to the grid, which will cause the tube to “shut off” when the audio waveform is below a certain point. Meanwhile there is another tube and associated circuit that is turning on before the first one turns off and is reproducing the rest of the waveform. In short these two tubes share the job of reproducing the full audio waveform.

Each type of design has its advantages and disadvantages.”

Advantages:
– The tube is ready to amplify the signal at all times.
– The signal is instantaneously amplified because the tube does not have to “wake up: from a less than full operational state.
– A 30 watt Class “A” amp will sound louder than a 30 watt Class “AB” amp.
– Because current is maximum at all times, the amp will have a smooth compression.
– There is not a lot of headroom because of the lower plate voltages used in Class “A” amps.
– Instantaneous amplification and smooth compression make for an amp that is responsive to the touch: the amp feels good and playing it is a satisfying experience.
– Combined with EL84’s in push-pull operation, the amp will emphasize high order harmonics and the amp will “sing”.

Disadvantages:
– Maximum current at all times means that the tubes are being strained even without playing.
– Shorter tube life.
– Lower power rating than a Class “AB” amp with the same tube configuration.
– Power transformer needs to be upgraded in order to handle the high current demands.

Disadvantages:
– Not as “responsive” as a Class “A” amp.

Good article, nice work! Maybe that should be a sticky in the amp section?

Class A amps (push) tend to be simpler to understand but harder to scale into high-wattage amps. This is because the entire waveform is affected at once.

Class AB amps (push/pull) tend to be more complicated but scale better into high-wattage amps. This is because the top half of the waveform is affected by one tube (or set) and the bottom half by another but with some crossover of the top and bottom in order to limit something called crossover distortion that happens with pure Class B amps (push/pull)

This article has some good if technical detail but has this great pic that helps to understand the different classical amp types: 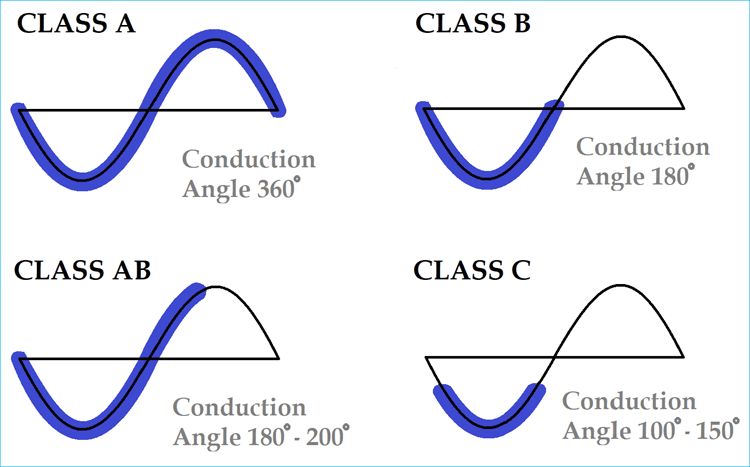 For the average guitarist, it doesn't matter. Go for the tone you like and let the engineers worry about how to build it. Understanding the difference can help to answer the questions about volume and weight asked earlier in the thread, but I wouldn't worry about any of it when you find an amp that triggers those endorphins.

Bill Ashton said:
Funny how amps rated at about half what the Fenders were, were at least as loud it not more!

Which is heavier, a Vox AC30 or a Fender Twin-Reverb?

Years ago I walked by an AC100 (maybe it was a small box AC50) at a guitar show, guy couldn't give it away! Ah, the shoulda-coulda-woulda...
Click to expand...

double the power = +3dB
half the power = -3dB
speaker sensitivity difference can be more than that - depending on model being used.
And the amount of speakers adds to the sensitivity soup...

3dB volume difference is in many tests found to be the minimum where AVERAGE listener can detect any change in volume.

HiFi guys with their golden ears claim to hear 0,1dB differences - but that remains to be confirmed.

double the power = +3dB
half the power = -3dB
speaker sensitivity difference can be more than that - depending on model being used.
And the amount of speakers adds to the sensitivity soup...

3dB volume difference is in many tests found to be the minimum where AVERAGE listener can detect any change in volume.

HiFi guys with their golden ears claim to hear 0,1dB differences - but that remains to be confirmed.
Click to expand...

I've dabbled in the HiFi world. Some of those dudes are stone cold NUTS.

I'll fully admit that I can be crazy, but damn.

No Vox amp runs in proper Class A other than the single-ended (one power tube) AC4. Each half of an AC15 or AC30's power section might at high volume amplify more than 50% of each audio cycle (waveform), so there can be overlap between the A & B sides of an AB config. But calling this "Class A" is generous. Note that Colby uses the term "push-pull" in his Class A definition, presumably to allow dancing around this. Push-pull == Class AB, as GAD notes. The AC50 in particular is most definitely a Class AB amp.

A lot of the verve in the AC15/30 sound comes from using cathode biasing in the power section, which in this case runs the power tubes pretty hot, and not using a negative feedback loop (which smooths out the frequency response but can lose some liveliness in the process). This is what many people using the term "Class A" are getting at. A tweed Fender Deluxe also meets this relaxed version of Class A.

What he said! Also, much of the early tonality comes from the use of an EF86 preamp tube, kind of revered
in the audio world, but not really a good application in guitar amps due to the physical abuse they take. But,
they do sound sweet. Later versions of the AC30 converted to the 12AX7 tube resulting in a lot of "what happened?"
To resolve this, in a short term solution, Vox added a little "Top Boost" panel through a cut out in the back, trying to get their old sound back.

To my knowledge, this was not the case with the AC50, designed as a beast for larger venues.

Correct: no EF86 in the AC50. In fact it uses a 12AU7 in the first gain stage, one triode per channel. This is a low gain tube, ~20 on the gain scale relative to a typical 12AX7's 100. The idea was to maximize clean headroom. The Mk IV version of the amp subbed in a 12AX7, probably since the rock & rollers were already doing this.

The EF86 is a pentode tube with a ton of gain and a rich, dark-ish sound. In the Normal channel of an AC15 or very early AC30 there's no need for more gain after the EF86…the signal goes straight to the phase inverter. I'm not a big fan of JJ tubes overall but they do make an excellent EF86. More robust than the oldies and sounds really good too.