Midnight Toker said:
I bet $$ there's not much Henry Louis Gates Jr could tell me that I didn't already know.
Click to expand...

Same for me. I have birth, death and marriage records of my ancestors going back to the early 1700s. I'm Italian. The End.

Well there are exceptions to every rule!

The Guilds of Grot said:
Well there are exceptions to every rule!
Click to expand...

But you are right though. Countless Americans have been handed down a fabricated account of their family lineage. Maybe out of pride/embarrassment. What patriarch isn't going to build up the importance of their genes when no one could ever prove them wrong? Fact is, for as many immigrants that fled to the US in search of a new life, there were also plenty that were purposefully leaving something behind and were all too glad to bury that family history for good. Just like I bet 1 out of 10 non indigenous Alaskans are descendants of a one time lower 48 fugitive.

I guess I was more referring to the "mutts" of many mixed lineage.

So yeah, my Dutch great-grandmother got pregnant by the Jewish man she worked for in the Netherlands, came to the States on the boat, had the child here, and gave him her own (Dutch) name. So my Dutch heritage is only 50%.

One of my fathers uncle's went to US - and at Ellis Island they had problems fathoming his last name - which consisted of 9 letters - they cut it short - now my US-relatives have the 4 first letters of our common family name . . .

Know why so many guys at Ellis Island were named "Tony?" They all had signs pinned to their shirts that said "To NY." True story
J

Lots of Greek immigrants entered Ellis Island with a long traditional Greek name and left the island with a much shorter name, like Papas.

I was adopted. Found my bio parents thru dna testing. Currently waiting for one of my three younger full biosiblings to do dna and get the shock of their lives.
So looks like mainly:
German

London/County Galway, Ireland
Levantine
Coincides with bio family being Sicilian/German on Biodads side and German Irish on bioMoms side. I am guessing the Levantine was a connection thru Sicily but no way to know without bio family contact to hear the story.
Last edited: Jan 17, 2022

I did my ancestry a couple years ago, as follows: Southern Italian, Northern Italian, German, English, Spanish, Balkan Region Eastern European, Euro Jewish. Maybe that's why almost all my best friends have been Jewish over the years.

I know my maternal grandmother got off the boat at Ellis Island from a steamship that came from England. I think her parents were German-born, but she was born in England. She died in 1929, so I never knew her. I think the Euro Jewish was on my mother's side of the family. The Spanish must have been on my father's side. My Grandmother's maiden name was Esselborn, and my mom was a cousin to Cora Esselborn, the wife of Yankee Hall of Famer, Phil Rizzuto.

My maternal grandfather was born in NYC to German parents. His parents probably came here in the 1880's. He was an Army Doughboy in WWI, but never saw action, as he apparently arrived in France in late October 1918 as the war was winding down. I have a photo of him in his uniform. My great grandfather owned a barbershop next to the original Madison Square Garden.

The Italian side of the family came here in 1906. My grandfather wound up in Orange, NJ, my grandmother in Port Chester, NY. They were from the same town in Italy and the families knew each other, so a marriage was arranged that lasted 63 years. They were both 19 when they got married. I still have relatives in Port Chester. Unlike many others, our last name was not misspelled at Ellis Island. My Uncle Pasquale Miloro was also in the Army during WWI, and I have most of his uniform, including his coat.

My wife is a real mix; Italian, Irish, French, Dutch, German, English. She had relatives here in the 1600's, so she could join the DAR if she wanted to.

I always wished I had some Native American in my ancestry, but it never happened. Years ago, I used to take my kids to a local Indian Pow-Wow. I went into a seller's booth once and the Native American gentleman manning the booth asked me what tribe I was from. I replied, "Southern Italian."
Last edited: Jan 18, 2022

GGJaguar said:
Same for me. I have birth, death and marriage records of my ancestors going back to the early 1700s. I'm Italian. The End.
Click to expand...

Dna can reveal family surprises. Not saying yours has any. But to get the complete picture , even for verification, you could do it.

For instance, in my case, anyone looking at my birth certificate will see me presented as the assumed bio child of my parents listed on the birth certificate. That’s how the state of MD presents it on a birth certificate. It does not say if child was adopted or a bio child. So people assume it’s a bio child. But in fact, they adopted me. No one would know this unless they were told, or found out I am not their bio relative thru dna testing.
Last edited: Jan 18, 2022
J

My wife's , mothers' side is from Italy. There is a cemetery in their old town with plenty of old grave stones with the family name. The DNA tests went from almost no Italian to no Italian after an update for my wife. She should be 25%. We choose to call their results into question.

Presented to my parents on their wedding day, Jan 2, 1960, this woodburned tablet hangs on my bedroom wall. 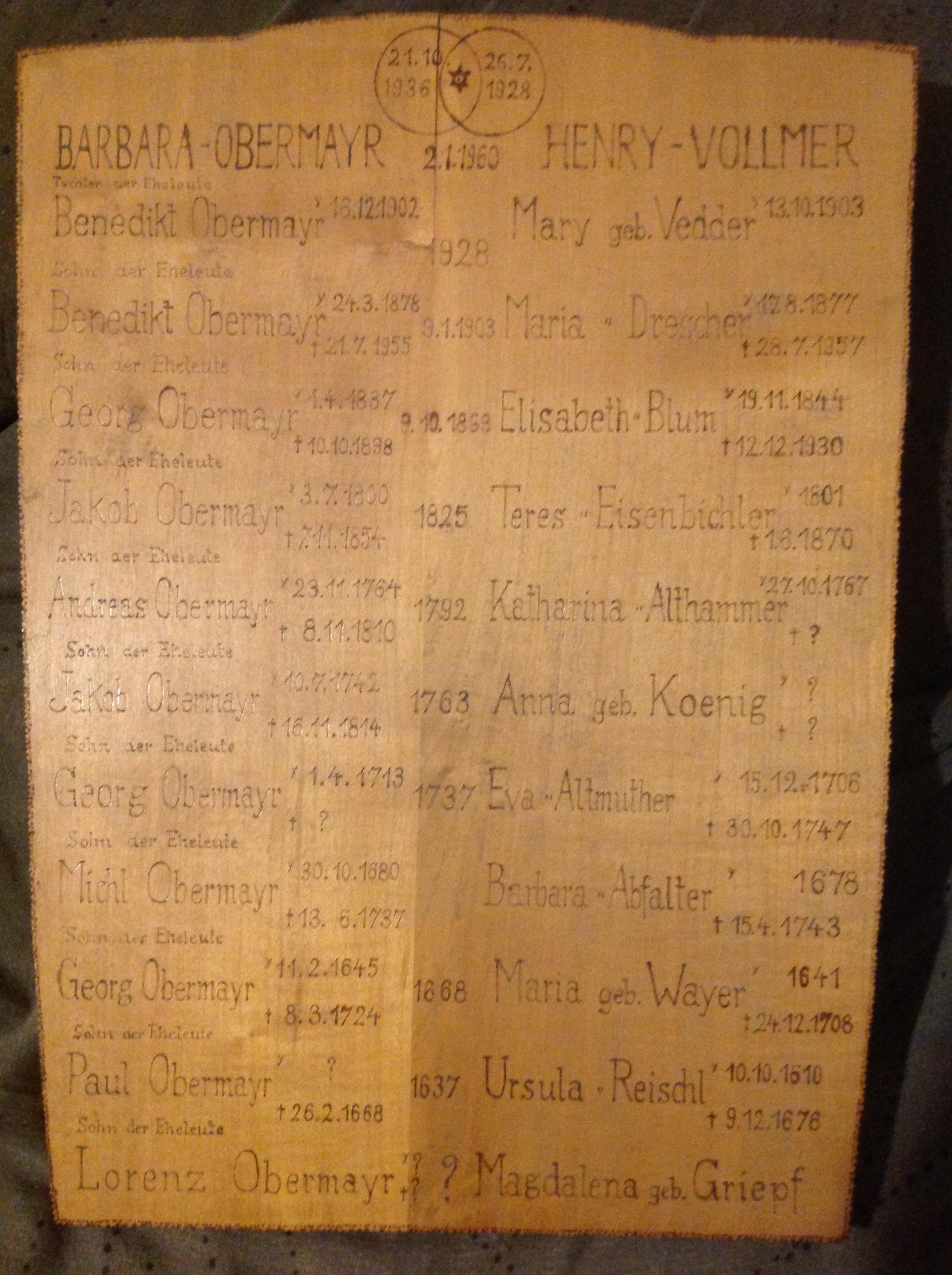 It's a cliff hanger! When will you ever know what happened before 1668 ?!

Mother Nature got the better of the engraved stones before then. (Actually, many of the original markers were either cast iron, or a very porous stone and are illegible, or gone all together) Today there is a one massive family marker w/ all the names (and many more extended branches) on it.

Armenian. My dad was three years old in 1915 when my grandmother fled from the Armenian Genocide in Turkey. My grandfather had been killed & she had three very young children in tow. My mom was from Greece, and her parents were killed during WWII when she was fifteen.

Life was all about survival for so many of our ancestors.

JohnW63 said:
My wife's , mothers' side is from Italy. There is a cemetery in their old town with plenty of old grave stones with the family name. The DNA tests went from almost no Italian to no Italian after an update for my wife. She should be 25%. We choose to call their results into question.
Click to expand...

I don't need Ancestry.com or DNA.

I visited my Great Grandathers grave site in Italy and the home they and my grandfather grew up in. My grandfather took my Dad there 2x. I took my Dad there 1x and visited relatives throughout the area. Grandfather was immigrant along with several aunts and uncle from same villiage. We were a typical close knit extended family....miss that 2gens later. But the lineage was intact....great grand parents would visit from Italy and it was like a hero's homecoming. Funny how they thought to bring along so much documentation to the US for safe keeping. But no, their side were not royalty or famous. Of interest I collect old pottery...turned out great grandfather was a potter as was his father. Most of the on hand docs stop around 1873 but Ive been able to reseach a lot while I was there...fun!

Anywho, my sister did a DNA test...you would never say we NOT were related by looking at us...turns out her DNA is northern European and North African....no Italian indicated and yes the southern Italians are an interesting breed due to the numerous occupying forces over the centuries.

But I still question the results.

lungimsam said:
Dna can reveal family surprises. Not saying yours has any. But to get the complete picture , even for verification, you could do it.
Click to expand...

I did. I'm 86% Italian, 4% Greek (makes sense since my ancestors were from the Magna Grecia part of Italy) and 9% North African (makes sense since the town in Sicily where my father's family is from is only a row boat ride from Tunisia). So, genetically I'm pretty much as Italian as most Italians are. In fact, a friend of mine who is from and lives in the town where my mother's family is from (even has the same surname, but not related) did a DNA test. His profile shows a higher percent Italian and higher percentage of Greek than me, but no North African (he has no Sicilian ancestry). Makes sense. But again, the main thing is that I have the paperwork for my ancestors going back 300 years and they were all Italian from the same towns within a 5 mile (8 km) donkey cart ride of each other.
Last edited: Jan 18, 2022

That paperwork can explain things that DNA cannot. A valuable trove of info I am thinking most people do not have.
Death certificates can show causes of death, (for family health history), birthplace (some surprises), and names of children and spouses, addresses, occupation, etc.
I know my adoptive family only has verbal history. Only one of my cousins bothered to interview aged relatives (he was a newsman) to compile a family tree. But again, it was verbal, not birth/death records.
Last edited: Jan 18, 2022