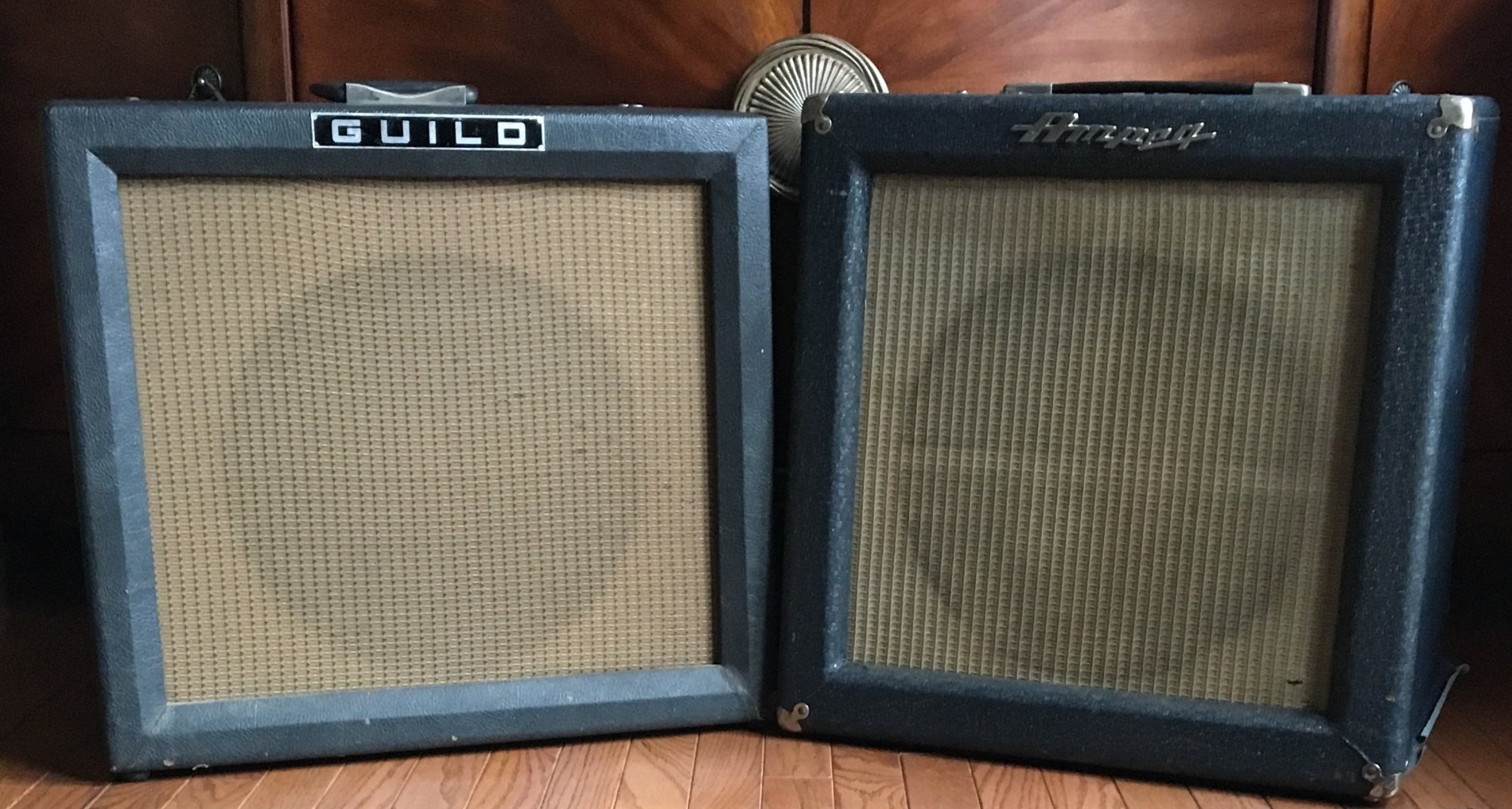 I really like guitar amps with 15-inch speakers and I especially like the Ampeg M-15 (non-reverb) and Ampeg R-15R (reverb). I thought it would be fun to compare a 1961 Ampeg M-15 to its contemporary -- a 1962 Guild 100-J. Both amps were aimed at jazz players. They pump out about 25 watts of power and have 15-inch Jensen C15N speakers, tremolo, and are powered by a pair of cathode-biased 6L6GC tubes with a 5U4GB rectifier. Each amp has two channels – one with 2 inputs, one with a single input, and stereo jack for using both channels simultaneously. Even the width, height and weight of the amps are nearly the same. That’s where the similarities end.

So with slightly different circuits and preamp tubes, I’d expect these two amps to sound quite a bit different as well. Amazingly, that is not the case! Being voiced toward the jazzbo crowd, both amps have a pronounced midrange and warm sound. But that doesn’t limit them to only jazz. The Guild is a bit more versatile thanks to the bass and treble controls versus the master tone on the Ampeg. The Guild has a clearer voice while the Ampeg has a more aggressive overdriven sound. They both take pedals well. The tremolo, being of the bias varying type, pretty much sounds the same on both amps. The Ampeg is louder than Guild when dimed, but that could be a function of speaker condition. I do appreciate that the Guild has a standby switch.

In my opinion the Ampeg is better suited to single coil pickups while the Guild does fine with both humbuckers and single coils. However, that observation is based on my musical preference. The Ampeg does the smokey jazz sound really well. This was sort of like comparing a Fender 5D3 to a Fender 5E3 Deluxe. They are on the same tonal stage, but they have different qualities.

Nice! They do sound very similar…and good IMO. Like your choice of demo tune too.

Yes, but why can’t you explain?

Hmmm. I've never seen an official schematic so it's possible that 1) it takes a GZ34 but the previous owner replaced it with a 5U4GB or 2) Guild changed specs somewhere along the way just as Fender did they started using 5U4GBs instead of GZ34s in the silverface era amps. I could always put a GZ34 in there since they draw less current, so maybe I'll do that.

Everything I have seen uses a GZ34, but a nos tube is spendy. 5u4s are cheap and easily sourced. On the B+ side, there's more voltage drop, some that compensates for the higher wall voltage. Doesn't do anything to lower the heater voltage though.

Thanks for confirming the GZ34! I've got a stash of NOS so I'll pop one in the amp today.

As a follow-up, I popped a NOS RCA 5AR4 into the Guild and there really isn't a difference in "feel" until the amp is cranked. The 5AR4 feels a little (just a little) less spongy, not that there was much sag with the 5U4GB. So, it could just be my imagination, but I'd rather have the right tube complement in there.

For some reason the links show a little box that should play - but there's no way to play the sound.

is this location restricted or something?

Nuuska said:
For some reason the links show a little box that should play - but there's no way to play the sound.

is this location restricted or something?

Same for me here in Vegas. Opens new window, little audio box opens and nothing happens.

Nuuska said:
For some reason the links show a little box that should play - but there's no way to play the sound.
Click to expand...