Fender era Bluesbirds - How Many? Play along!

I'm not saying it's a good idea, but you could get similar output levels if you put the two coils in parallel instead of series in humbucker mode. That just cripples the output level in H mode to that of S mode, but they would be closer.

Personally, the drop in level when switching to single coil doesn't bother me much, but I understand that we all approach playing from a different perspective.

Here's my '00 Rhode Island bird ser# CL0001584. I made some mods to it - swapped out the stock SD's for a pair of Rose California alnico II's to get a slightly sweeter, fatter sound. I also put in a push pull pot to do the Peter Green out of phase thing - very cool mod. Anyone else swapped out the stock SD's or did the out of phase? I'm very happy with my mods, but I suspect it hurts the resale value? 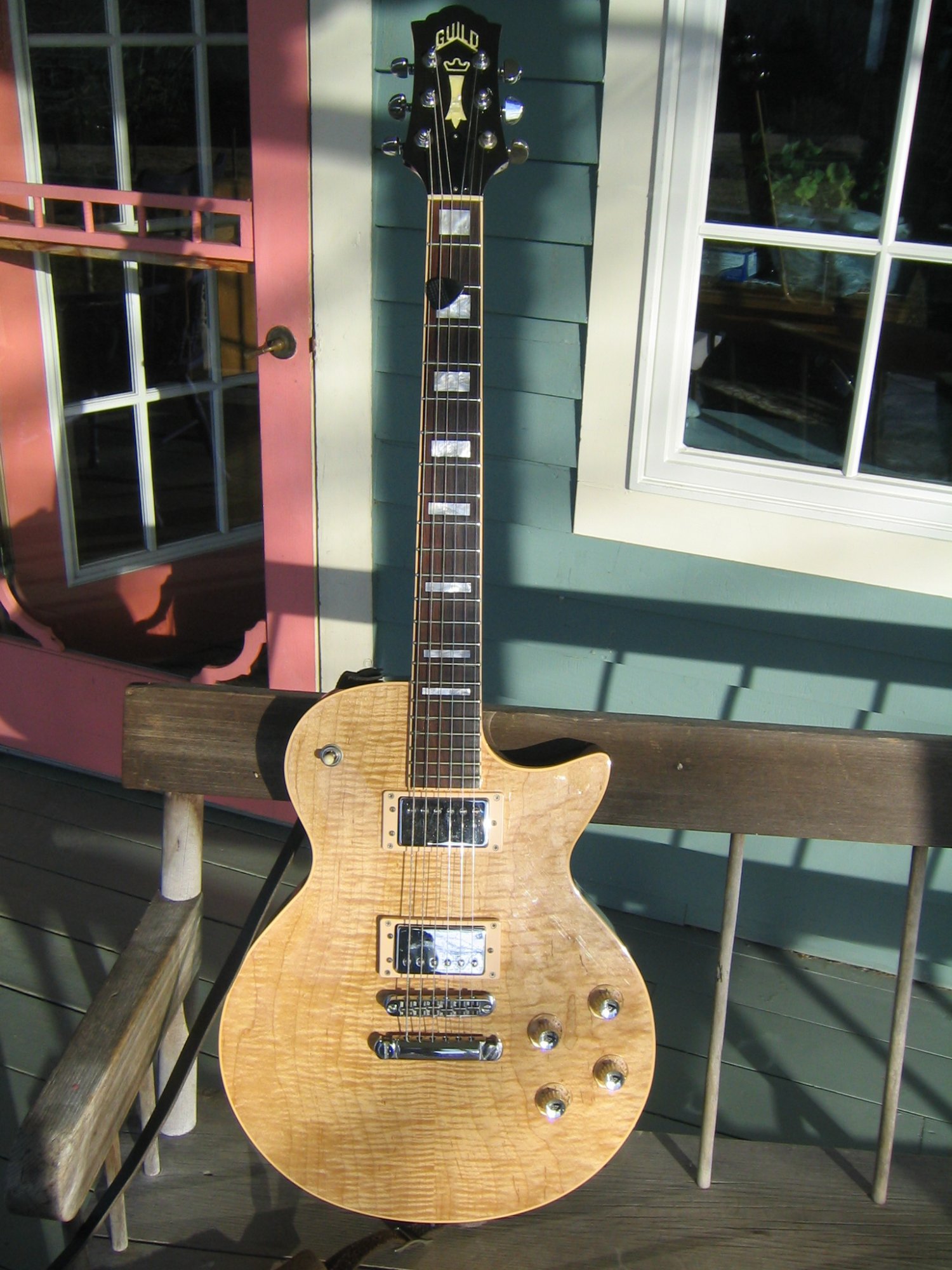 DThomasC said:
Forgot to say: Clayton, that guitar is beautiful. The colors... I just decided to call it chocolate amber burst. You can use the name if you want.
Click to expand...

That's the "Tobacco Sunburst" and was reserved for the Bluesbird AAA's according to the lit.
Actual practice may have varied (eg Clayton's is a BB P90) but that definitely looks like a AAA top. 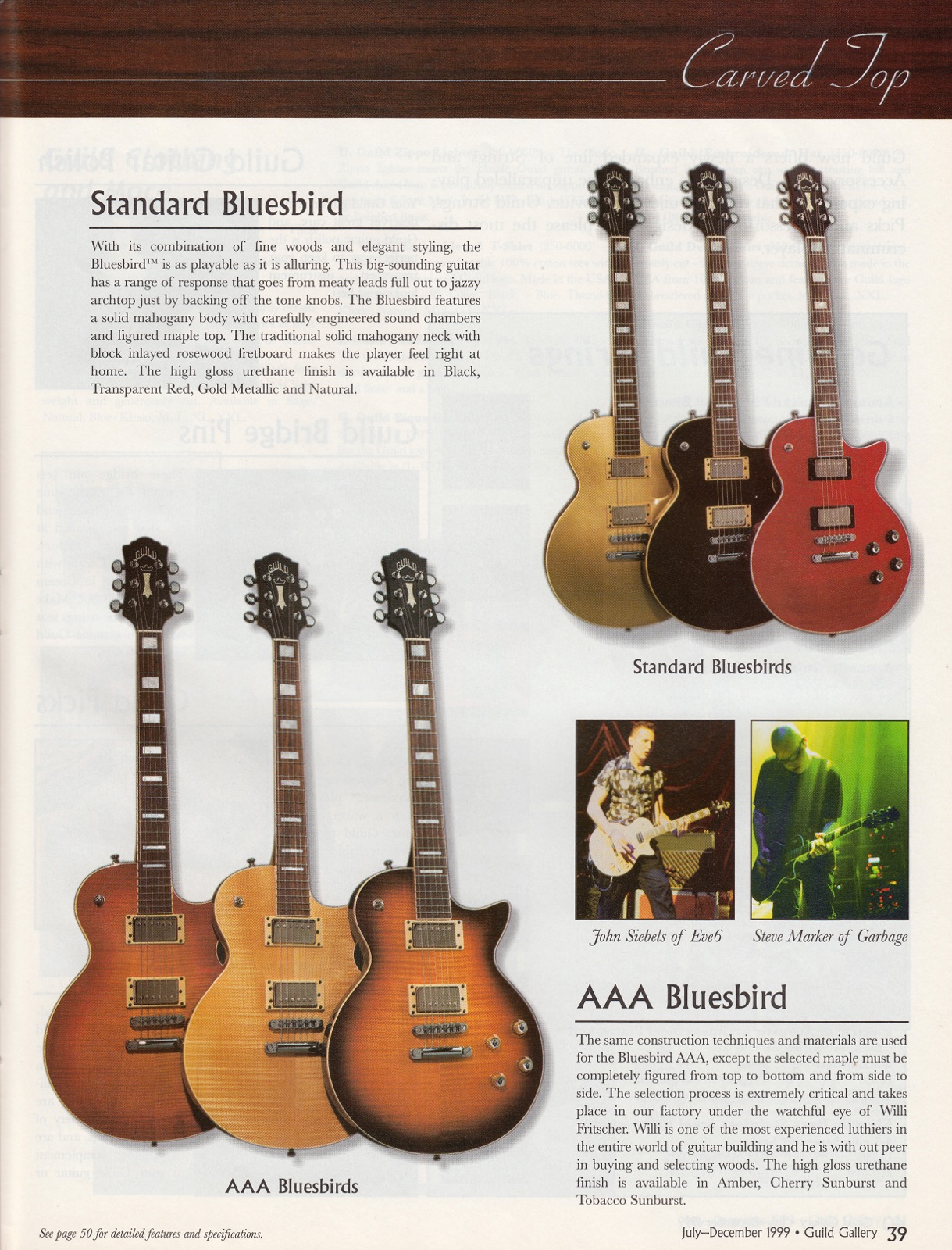 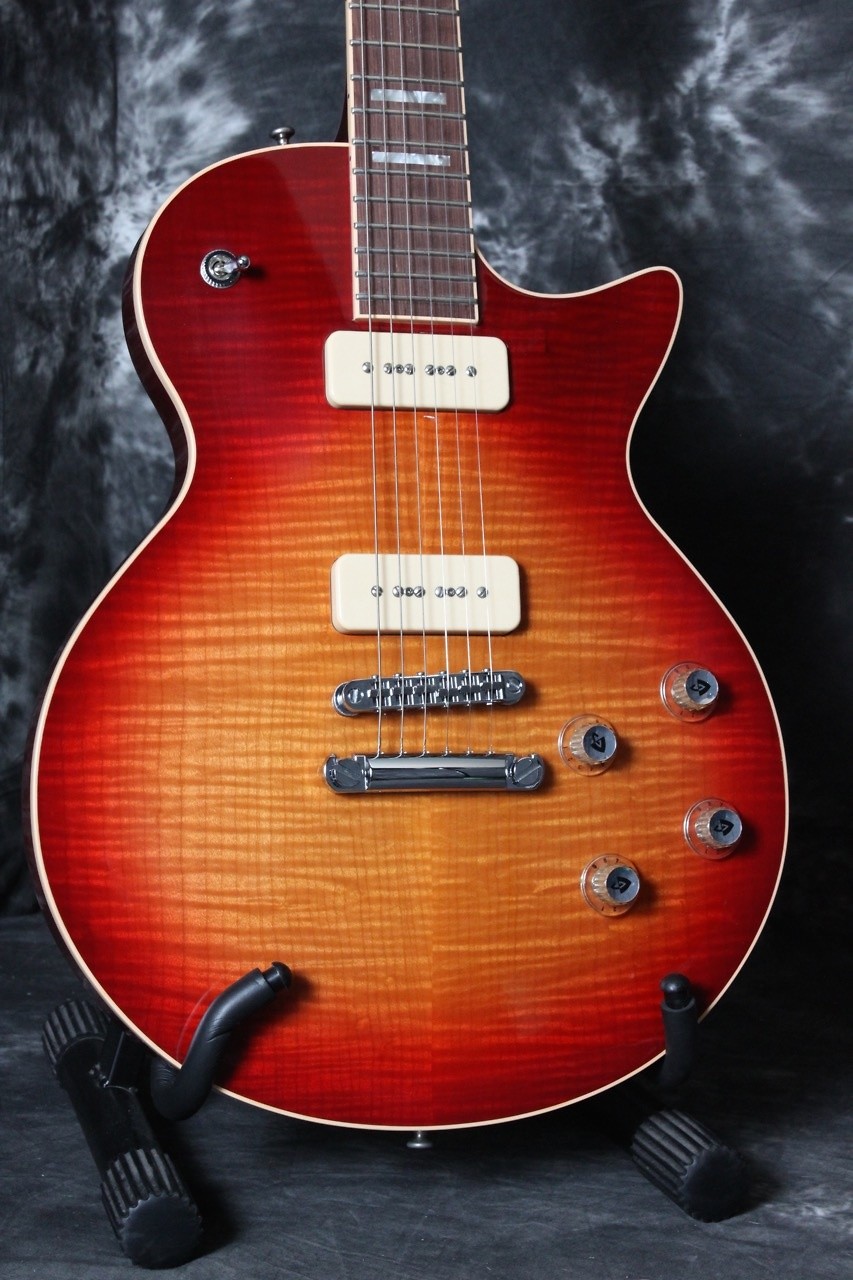 Oh yeah the limitations of 4-color process coupled with digital color shift on that page is really bad, actually.
Especially the Cherry which is the one on the left.
Almost all the catalogs from the '97 electric to the 2001 (pictured here) on GAD'S site are just as bad, and it's not his fault.

Even I can tell that the color in catalog pages is suffering (and I know it's not GAD's fault ) - but the difference I noticed is in the spray pattern. There must be names for different burst styles, there's names for different cutaways... The ones in the catalog look like they have a nice even strip of dark all around the edge. OTOH, all of the actual sunbust Bluesbirds that I've seen, including mine and Clayton's, and I'm talking about Fender era chambered Bluesbirds, all of them had a burst pattern that reminds one of finish wear on a vintage arch top instrument, maybe even a cello or violin. I've always taken it for granted that that's what inspired the original sunburst style, so it just looks right to me. I think we should call the guitars in the catalog Melody Maker Burst style. Just an idea....

The biggest problem with that era of catalog is that the pages are tissue thin and color bleeds through from the other side when scanning due to how my scanner works. I could probably make them better by photographing each page on a pure black background. But I'm not gonna.

GAD said:
The biggest problem with that era of catalog is that the pages are tissue thin and color bleeds through from the other side when scanning due to how my scanner works. I could probably make them better by photographing each page on a pure black background. But I'm not gonna.

I don't blame you. It must have been a tremendous project to begin with. It's good the way it is.

DThomasC said:
The ones in the catalog look like they have a nice even strip of dark all around the edge.
Click to expand...

I was always sure the real problem was with the actual printing process exaggerating just how dark the edges of the bursts (the Tobacco in particular) actually are.
Has to do with "dot count" in the "screen" used to create the different plates for each color. Lower dot count means less resolution so less ability to show fine graduations, but it's cheaper, of course.
Oh, another thing: "Dot gain": as the dots of ink dry they spread a bit, they get a little larger so in the case of the black dots they can begin to look like a solid. Better coatings minimize the dot gain, cheaper ones, not so much.


GAD said:
The biggest problem with that era of catalog is that the pages are tissue thin and color bleeds through from the other side when scanning due to how my scanner works. I could probably make them better by photographing each page on a pure black background. But I'm not gonna.

Coming from the printing paper supplier industry, I can say that my '96 Catalog and the First Guild Gallery are printed on appropriate thickness stock, also the paper used is good quality coated which helps color stand out in 4-color process and gives some opacity in its own right.
The Fender Frontlines for sure are thinner due in part at least to their page count and a cost target and probably do show some "transparency" especially if your scanner backlights the pages. There's only so much that can be done when the coating starts weighing more than the paper as you noted with the "tissue thin" comment.
Printers hated it too, it wrinkled easily on press.
And the best pic of the Cherry Sunburst is in fact in the "'97 Electrics" catalog, when they were still using good paper, and probably higher-density screens: 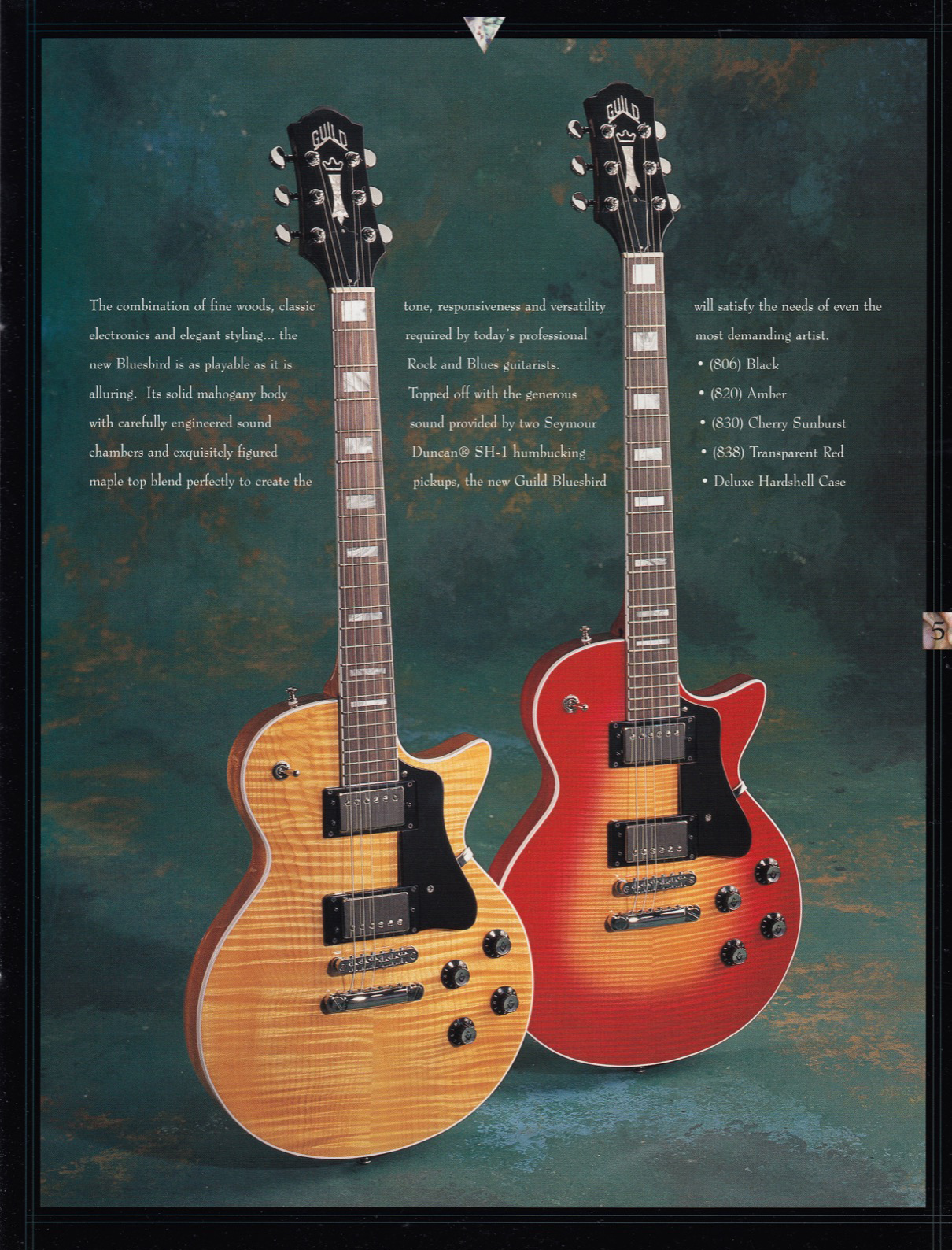 I'd say early on in the game Fender was paying the nominal increased cost to provide high-quality catalogs, but the cost of paper started going up pretty quickly in the late '90's, too.
For comparison everything I've explained is glaringly evident in the finish color chip charts in the Fender Frontlines, especially the "screen resolution" (meaning the printing plate screen): 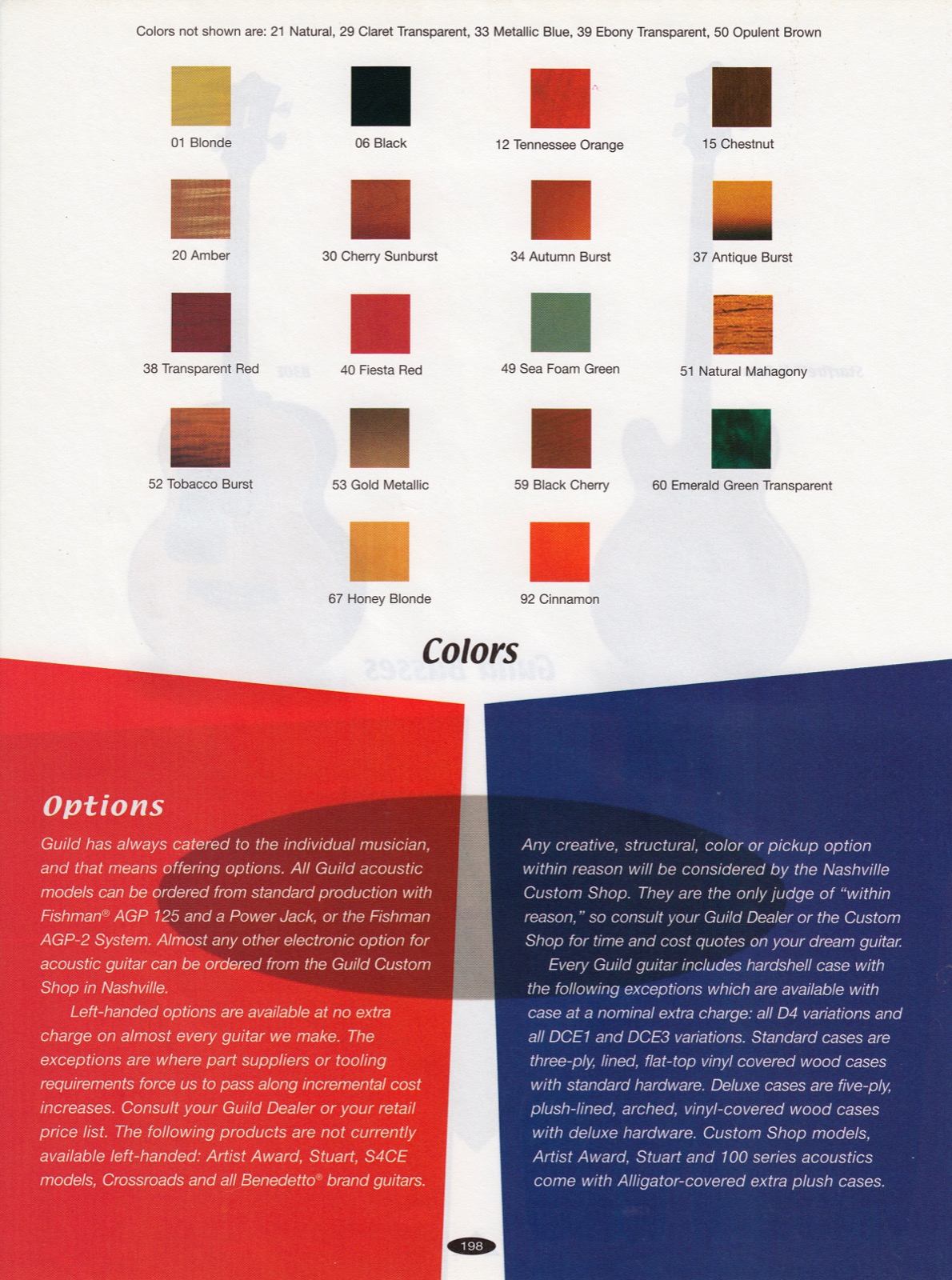