Even Guild Doesn’t Know What This Is

Hello folks. New to the forum and will state right off the bat that I’m came here looking for help identifying my Guild. I bought this in a pawnshop a few years ago. I emailed images and serial number to Guild looking for answers and they were stumped. At least the gentleman I spoke with who graciously responded with a phone call. What I have is definitely vintage, maybe early ‘60s I’d guess. It’s stamped on back of headstock D55, with a serial number that matches the label inside. It’s the old Hoboken 300 Observer Highway address. The problem is it’s not a Dreadnaught. Looks like an OM or OOO shape and the headstock is not any Guild design I’ve seen. It also has a classical guitar style bridge. The pic of the label is kinda hard to read and will try to get a better one. It also appears there may have been a headstock veneer that’s missing but from a side view all the lines match up. Is this something a worker threw together from a bunch of parts or a prototype? Thanks in advance for any help. 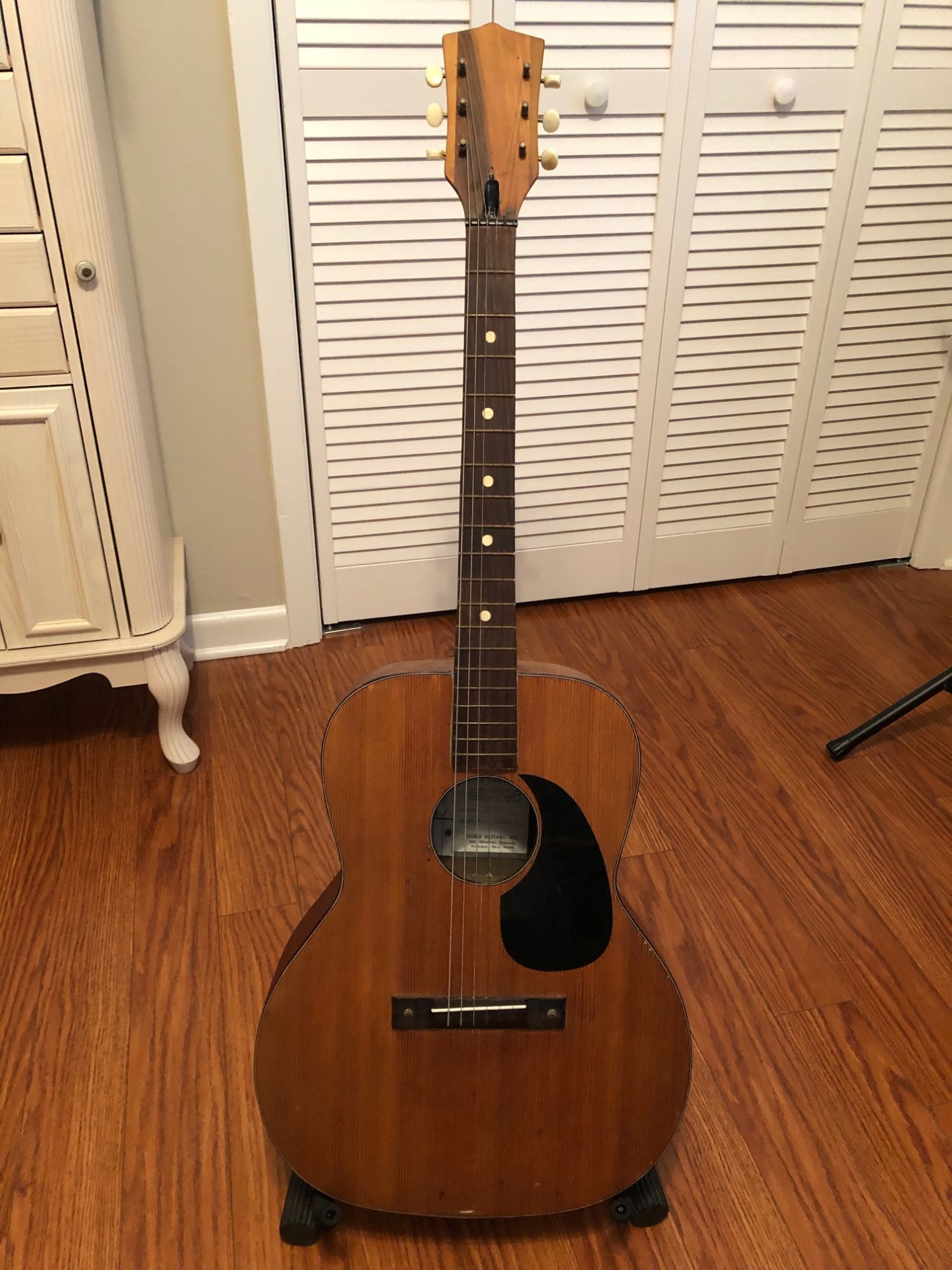 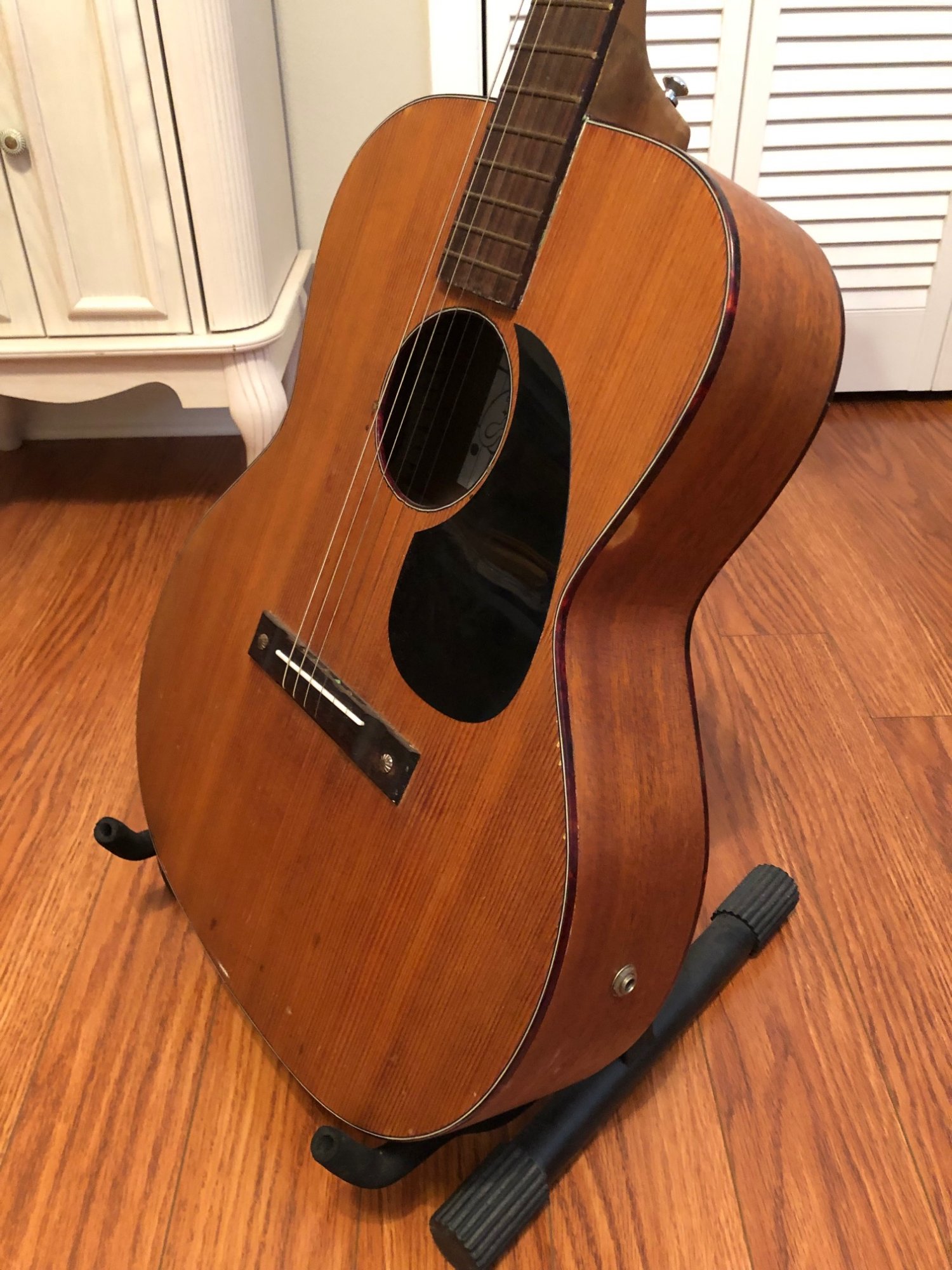 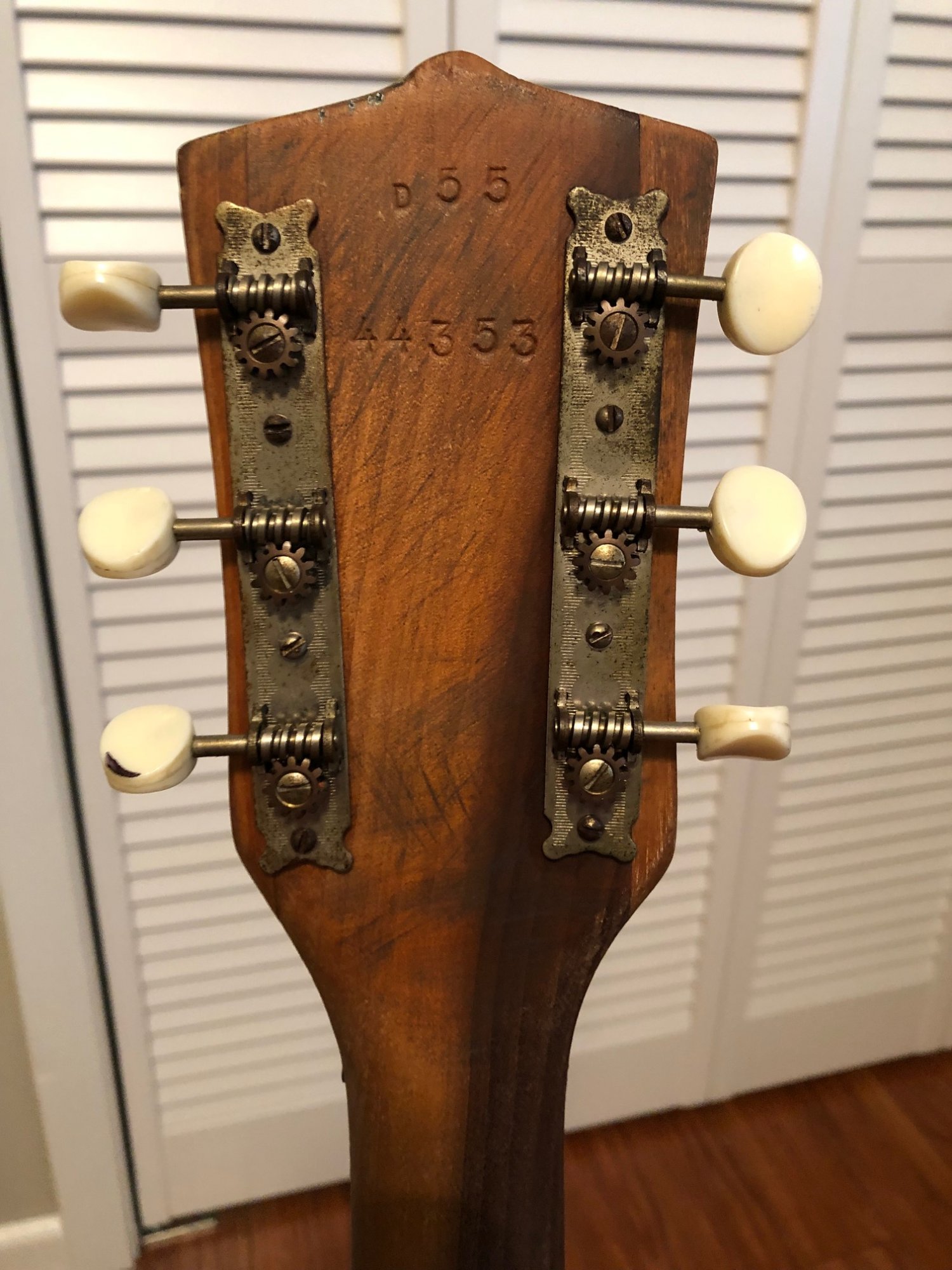 other than the headstock, and just that it is somewhat familiar to me, i do not recognize any other part of this old acoustic as Guild.
maybe a closeup of the inside decal would help.

IMHO nothing on that guitar looks like a Guild other then the label. (From what I can see of the label.)

Welcome to LTG!
As already mentioned, nothing on this guitar is from Guild, except a label that is most probably a copy of an original label. Maybe you can post a close picture of the label, just out of interest, so we can comment on it. Neither Guild parts put together nor a prototype.

To me that is like a Kay Kraftsman made guitar similar to that one: 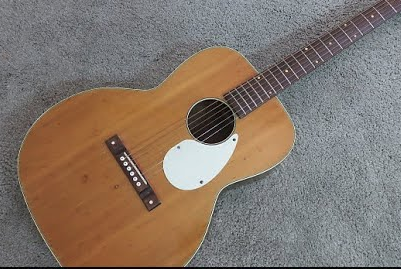 Looking at the big single line fretboard dots on your guitar it seem to be a guitar from the 60ies.

Typical Kay style bridge with those two flowers on both sides: 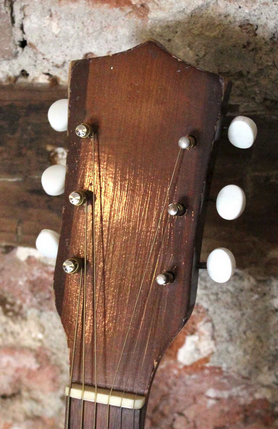 The label inside is probably hiding a big stamped number.

Here's a lot more to read: 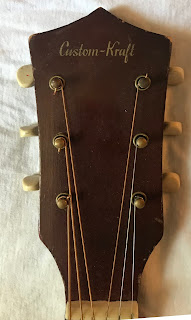 It's already been said. Not a Guild.

doctorbb said:
Hello folks. New to the forum and will state right off the bat that I’m came here looking for help identifying my Guild.
Click to expand...

Another couple of "tells" about that instrument: I've never seen a model number stamped on the back of a Guild headstock, only the s/n and "Made in USA" and for a short time in '87, the year.

Never seen that type of bridge on a Guild steel-string flattop. The bridge looks like it may be "bolted on", with those caps covering the screws. Guild never did that, that I've ever seen.

The neck heels on Guilds were always "flat". This one looks like it's got the more common "sharp" heel.

Should we start a new thread with "Look Ma - I Made A Guild Out Of "Xdfghj" ?

Defintitely a Kay, as noted above. I've had a couple.
D

Well here’s a pic of the label. Someone went through a lot of trouble faking this. The label is old and shows no sign of tamper. 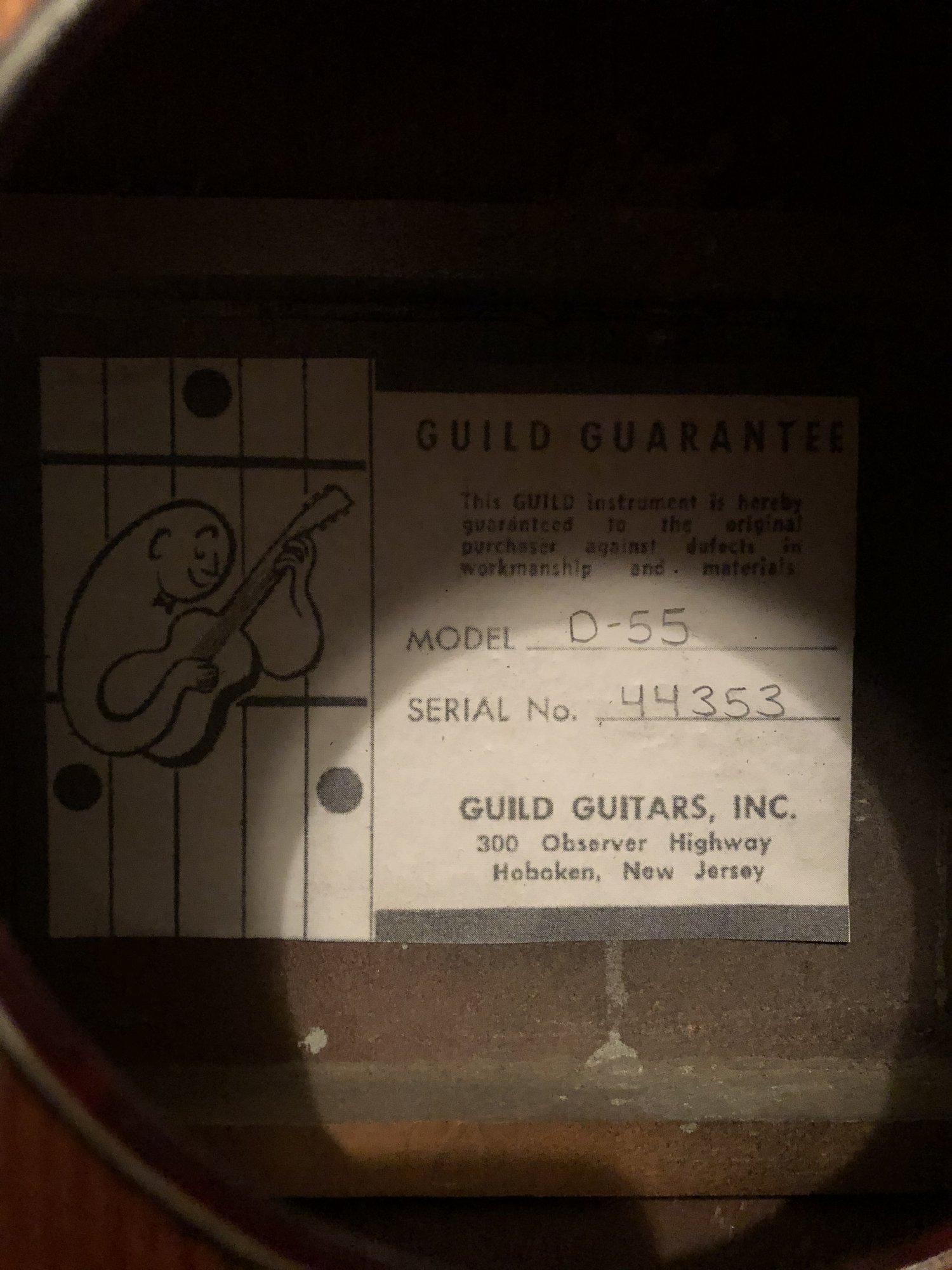 Found this online. Think this is it. But it’s called. k5113. Why would someone stamp the D55 and serial number in the headstock? It looks so original. Crazy. 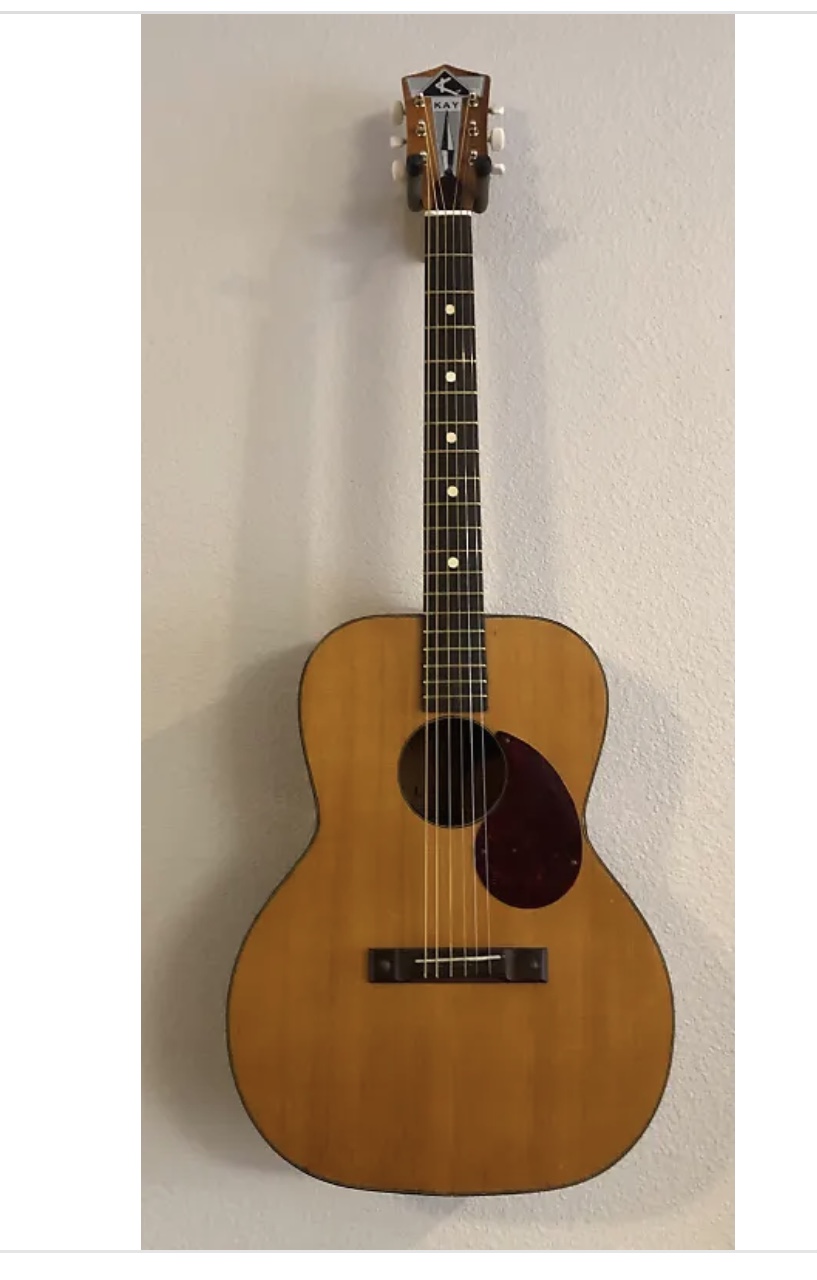 doctorbb said:
Found this online. Think this is it. But it’s called. k5113. Why would someone stamp the D55 and serial number in the headstock? It looks so original. Crazy.
View attachment 13152
Click to expand...

Are you in Texas, or nearby?
D

Is it just me, or does the “label” look like a photo copy? Edges not even straight.
Paul
D

There was a major counterfeit guitar group based out of Texas. There are discussions here on this forum concerning this. They did several faux Guilds that still pop up. Someone here may know how to share the past discussions, articles.
S

Veer---Never see or hear the words Beaumont, TX without thinking of Christmas Break fourteen or fifteen years ago. My wife had just gone to Walmart to get something when a teacher friend and fishing friend called me on my landline and asked me if I wanted to ride with him to pick up a Motorcycle he had just bought. "Sure" I said, "when? "Pick you up in about 20 minutes. Left my wife a simple note, "gone with Roger to pick up a Motorcycle he just bought." Did not have a cell phone, then. He comes by and we are headed to get the Motorcycle. When we leave Dickson and get on I-40 west, I asked where we were going to get the Motorcycle and he said, "Beaumont, Texas." I-40 to Memphis, then south through Mississippi, then west on I-10. I called my wife from St. Charles, LA. Around midnight, we arrived and loaded the Motorcycle and did an aboutface and headed back. I will ask 'where" if he asked me to go with him to get a Motorcycle, again
D

bowenite60 said:
There was a major counterfeit guitar group based out of Texas. There are discussions here on this forum concerning this. They did several faux Guilds that still pop up. Someone here may know how to share the past discussions, articles.
Click to expand...

You can start here although with the software upgrade I still have not fixed the links.

But all of the guitars documented there wear "modern" and did not try and imitate vintage features, including the label.

Thanks for posting the label. Yes, all the Hoboken labels would be still dark black and have very sharp fonts. That black never faded. What usually happened however was that the handwritten model numbers and serial numbers faded away, so there are many where you see like an empty label. (see left example)
So that label in the Kay (right picture) is clearly an old photo copy, nothing that was done recently. You can see how coarse the pixels are of the black and how coarse the font is. 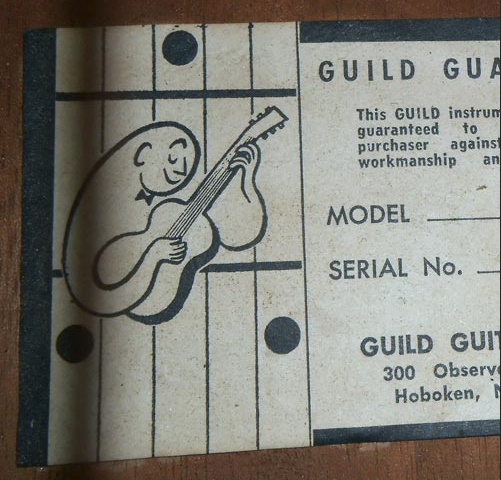 Anyway, I think together we solved the mystery about your old guitar! Even down to the model number of Kay K-5113 "Plains Special" from the 60ies.


bowenite60 said:
There was a major counterfeit guitar group based out of Texas. There are discussions here on this forum concerning this. They did several faux Guilds that still pop up.
Click to expand...

Correct, but in that case, like Frono said, that vintage Kay is unlikely to be from them. We checked many of the Asian guitars they converted to Guilds and all had the same kind of style. But yes, most were sold in Texas pawn shops.


Nuuska said:
Should we start a new thread with "Look Ma - I Made A Guild Out Of "Xdfghj" ?

We should have had such a fun thread started in the past, because we have seen many such conversions in the past where some past owners thought it is cool showing off with a new Guild instead of whatever. And unfortunatelly many were plain forgeries like from that band that made a living out of converting Asian models into "Guilds". Today there are plenty of Chinese made counterfeits but most are so obvious that it is not even funny to post. But a lot of the pictures I remember are gone long time here in the forum, so it would be dificult to reproduce. At one point in the future I will create a long thread about all the Japanese "Guild style" guitars from the 70ies, I collected lots of pictures and catalog pages in the meantime, it's just a matter of effort writing that all down...One day...