Daytime TV is the worst!

Let a sinus infection go too long and ended up having it run to the ear and jaw....feels like my teeth are going to explode when they aren't searing in pain when I inhale or eat/drink anything not perfectly aligned with my body temp. Fun times!

Went to an "instant care" type place Sunday and was actually pretty impressed with the people and operation. Tried to relax yesterday but too much stuff to finalize what w/4-8" of snow coming Tuesday

So, pumped up w/antibiotics and advil I went to the office today...lasted about 2 hours. Came home, jumped into bed and turned on the boob toob.

Thank goodness I was in and out of sleep. I can't believe the cruddy programming out there. I don't watch much TV anyways besides binge watching old Law & Order, (Mike Moriarity my fave), but the big three channels have some really inane stuff out there. So much screaming and overtalking...feel asleep, awoke to more screaming up until 4.

Thank goodness for HBO on demand..got to watch some soothing Sopranos

When I was a kid I asked my Dad: "Why is TV free?" He told me "Because the sponsors pay for it." What a concept; I thought that was a universal rule until the advent of pay TV in the late '70's...

dreadnut said:
When I was a kid I asked my Dad: "Why is TV free?" He told me "Because the sponsors pay for it." What a concept; I thought that was a universal rule until the advent of pay TV in the late '70's...
Click to expand...

ya get what ya pay for huh

To be fair pay TV originally pitched itself as offering better reception, how else ya gonna compete with free?
And for quite a long time cable/satellite offered a lot less commercial time (on the cable-only channels) which was offset by subscriber fees, and now the incentive was not only better reception but a large channel selection.
I never did go in much for all the dedicated movie channels or premium channels like HBO and Cinemax, and after 2 or 3 years of ownership AT&T is finally playing their same old games with DirecTV and I'm on the cusp of telling 'em where to put it.
Come full circle to digital TV:
A lot of the digital channels are dedicated to vintage television shows, and y'know what?
Suddenly reruns of Route 66, and TJ Hooker, and Batman, and the Newhart Show, and a bunch of other stuff is starting to look pretty good.
And c'mon, be honest with yourself, Jerry Springer rocks: 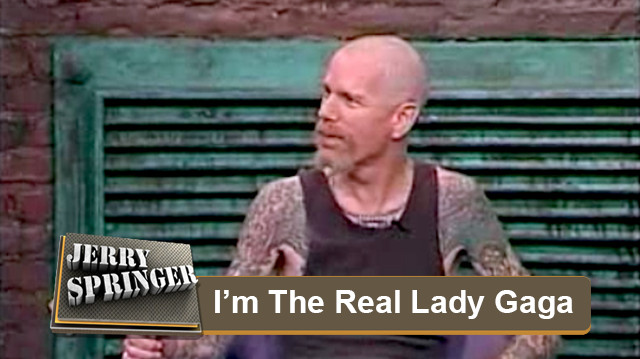 The drawback is the antenna's gotta have a really good line of sight to the broadcast towers and it's pretty worthless past 50 miles, and very sensitive to interference of which there's plenty out here in Silicon Valley.
But hey whaddaya want for free these days?

beecee said:
....I can't believe the cruddy programming out there. I don't watch much TV anyways besides binge watching old Law & Order....
Click to expand...

Oh, it's MSNBC for me, much more now that the country is going through some rather momentous times. Plus there's always the chance of catching sight of Natasha Bertrand. :tiger:

Being a baseball nut I watch a little MLB Network almost every evening I'm at home. That's it for TV, aside from streaming YouTube or Netflix to it or using it as a slideshow for recent photos. (The TV runs Android.) Or, ever more rarely, watching Blu-rays or DVDs.

Used to watch three shows - NCIS, Big Bang Theory and Modern Family. Now down to two, and next year down to one as the shows end. Occasional sports (Go Pats!) (Go Bruins!). Maybe the news once in a while. But TV news depresses me - I read an actual newspaper delivered to my door every day, that's plenty.

And like Al, an occasional shot of the Andy Griffith Show, or The Office suits me fine.

Can I just play my guitar? Much more satisfying than staring at the plug-in drug.

dreadnut said:
Can I just play my guitar? Much more satisfying than staring at the plug-in drug.
Click to expand...

When I moved from town to the farm I let cable, HBO, etc., go since it wasn't even offered out here and we put up a $65 Radio Shack antenna. We're still using that antenna 34 years later, although I have not watched TV in almost 20 years and haven't missed it a bit.

I find it funny when those TV hawkers in the stores approach me and say that they can save me money on my TV channels. Really? I have an antenna and don't pay a dime. One of them even tried to argue with me that he could still save me money. I guess he was going to pay me to watch TV, but I'm not even interested in being paid to watch it.

I think the broadcast HD picture is better than the cable picture.

I also like that I get 4 public broadcast channels. Really great cooking shows on the weekend.

If it wasn't for the golf channel and other sports, I'd probably ditch satellite.

If you have Netflix, there's some fun shows. If you're twisted AF, watch the US version of Shameless....... it's, it's ..... shameless!! And twisted and when you're off your cold meds.... you may revisit. But alcohol and pain meds help... although I only do alcohol these days. Sorry you're sick. Don and I were home bound for at least a week with a hideous cold. But now we go out and cough our lungs out at the bar at happy hour!!!! HAPPY TO SHARE!!! :highly_amused:

I watch A LOT of good live music performances on YouTube. Luckily my TV is a smart tv, and I can watch it on there. If not, I'm just as happy watching it on my phone w/ earphones. Everything is on youtube...EVERYTHING.

Rabbit Ears work great. Also hook a laptop up to your TV. The World Wide WEb Can be all Yours!

I beg to differ on TV sucks in the daytime. I guess it depends on the type of shows you like. For me there is always something on Discovery or A&E or Nat Geo or Comedy Channel............ my new favorite on Science Channel is "Engineering Disasters"
You must log in or register to reply here.
Share:
Facebook Twitter Reddit Pinterest Tumblr WhatsApp Email Link
Top