Hi Very new to this forum, came across by looking up these two guitars. Possibly wanting one or the other the D-40 is showing signs of it having possible finger board repairs, (Glue squeeze out that was not cleaned up at or about the 3rd fret) and the frets have been mowed down and not re-crowned. I like the cutaway and have played one of these before and love it, Priced around 600. however I have the opportunity to purchase locally a DV-6 NT he says mid 90's (have not went to look at it yet) I have not found much information on the DV-6, by the looks it wasn't made for a very long period of time, was it built in westerly before Fender? also priced at 600. I can re-fret the D-40 and level the fingerboard, I have someone GOOD that is a close friend of mine and can do it very cost effectively for me, so I guess my question is which one is the best value. or if given the chance take both?

The Westerly-made DV-6 would have a spruce top and mahogany flat (braced) back and sides. IIRC, an LTG member who worked at the Westerly factory remarked that they were an under-appreciated gem in the Guild lineup of the day. Later, DV-6s were also made for a time in Mexico and in in the Tacoma factory. The MIM and Tacoma DV-6s had ROSEWOOD back and sides, so would sound different (not better, not worse, just different).

You don't mention prices, so it is hard to say which is the best value... either could be a great guitar for you. If you can, play them both, and decide which sounds best to your ear. Then go from there... Happy hunting!
R

GardMan said:
You don't mention prices, so it is hard to say which is the best value... either could be a great guitar for you. If you can, play them both, and decide which sounds best to your ear. Then go from there... Happy hunting!
Click to expand...

Sorry, didn't catch the price w/o the dollar signs (yes, you can post prices on LTG)... Sounds like $600 might be a good price for either, depending on the condition and the cost of any work that needs to be done. Good luck!

My understanding is the Westerly-era DV-6, D-6, and D-40 were all similar variations on the same flat-back, mahogany body, spruce top dreadnought theme. Play 'em both and grab the one that grabs you.

I have a Tacoma DV-6, and as GardMan points out, it is a very different guitar.

And welcome - stick around. Nice bunch of folks around here.

Hopefully you bought it and if so, from a very good seller
S

Again, I am a Richard P. fan. It will be every-bit as good or better if it is/was his (and his is gone. Hope it was you!
W

Yep Im guessing my post prompted someone to buy it LOL im not worried I have eyes on a few other things too I'm going to look at the DV6 this afternoon. and more than likely take it.

gjmalcyon said:
My understanding is the Westerly-era DV-6, D-6, and D-40 were all similar variations on the same flat-back, mahogany body, spruce top dreadnought theme. Play 'em both and grab the one that grabs you.
Click to expand... 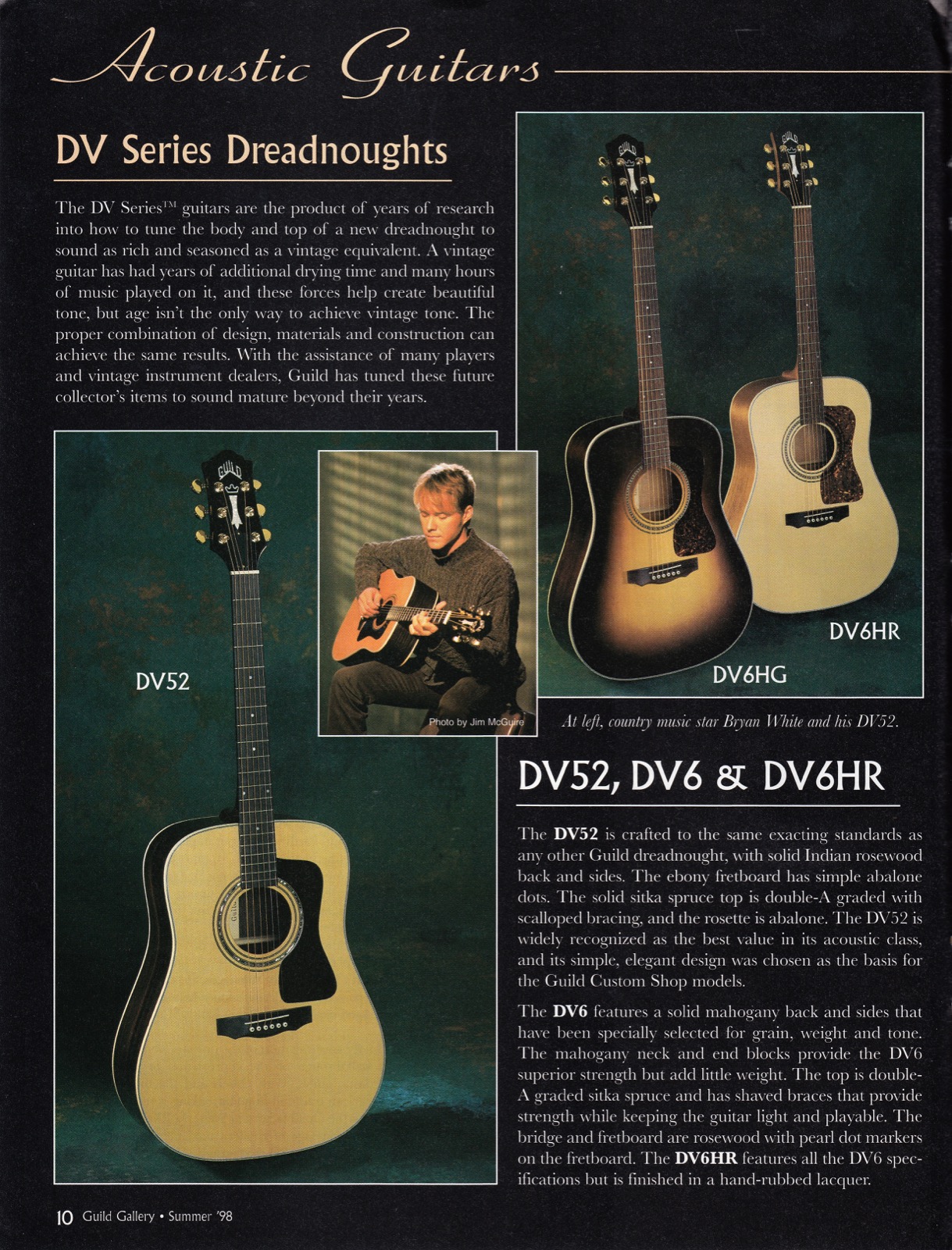 I don't know if the D40 had scalloped bracing just before it was discontinued, but I suspect it got it as well as the DV-6's distinctive "snakehead headstock" when it came back and the DV-6 went away until revived as a rosewood body in Tacoma.
For a while there I thought of Dv-6's as "D40's on steroids" and would have liked to try one out myself.
From a pure "value" standpoint right now I'd say go with that Westerly DV-6; if nothing else it'll be less likely to need any serious work for a while, and you'd only be giving up the cutaway if that's not a problem.
Also, DV-6 production cut across Fender's ownership of Guild, the purchase (of Westerly) was finalized in November of '95.
BY universal agreement here, Fender's acquisition was not a bad thing and DID NOT adversely affect quality, contrary to some persistent internet myth.
You can check the DV-6's build year here:

http://guildguitars.com/wp-content/uploads/2014/08/history_of_your_guild.pdf
Note the records weren't updated after '97, so if a guitar's s/n falls after what's shown but it has a Westerly label, it was built between '97 and '01 when Westerly was closed.
Welcome aboard and keep us posted!

You've gotten a lot of good advice so far. Now that the D40 is off the table you can focus on the other one. That DV6 NT sounds like a really good choice. Please tell us how you liked the trial run. I hope you liked the DV6. Honestly if one came near me in good shape for that price, I'd ignore my "no more dreads" policy so fast it'd make your head spin!! Keep us informed.

P.S. - new to the forum but don't know your knowledge level. Do you know how to check the neck angle on a guitar? You'll need a steel straight edge of at least 24 inches. Details here: http://www.frets.com/FretsPages/Musician/Guitar/Setup/NeckAngle/neckangle.html
Last edited: Apr 17, 2020
R

Yes I have and thank you guys immensely for all the advice and information, I actually took ownership if a DV6 NT HG ser# AD061355 would that make it a 96 Im not sure how their numbering works. And yes it is bright and bold for sound, I have a washburn D-32 from '92 which sounds pretty dang good but this kinda smacks it in the face LOL

Sounds like you made the right choice! Congrats and enjoy!
S

Good for you and happy your happy. Enjoy the adventure.
K

A little late to the discussion, but I have a DV-6 NT HG. It is a great guitar in terms of tone and playability. It was the companion to my since departed DV-52. The DV-6 is more mid range focused than the DV-52, but somewhat warmer. and not as loud (using the same strings and, as much as possible, pick force). It embodies all the qualities of a good mahogany dreadnought; the DV-52 does the same in a rosewood deadnought. Both sound more like well aged 40-50 year old guitars, but they are onlr 25-30 years old.
You must log in or register to reply here.
Share:
Facebook Twitter Reddit Pinterest Tumblr WhatsApp Email Link
Top