I know that there are a couple of old threads around here about the CR01 guitars but I did not want to "necro-post" and the ones I read did not really have much listed anyways.....I do understand that only 97 of these were made and out of those, supposedly only about 30 or so sold to the public.

Do any current members own one of these? I have read most of what is out there (not a lot) and was just wondering about some of the appointments (chrome hardware etc. etc.) and if anyone had seen any variance from the norm?

I have had one of these for several years, and look around for info from time to time, just to see if there is anything else out there.....I know pics or it didn't happen, and I will snap a few......

thanks in advance for any information or direction.

Welcome to LTG! Yes, some members have a CR01, Michael (krysh) and matsickma for instance. Hans has probably a few (I just guess). If you go to "Advanced search" and enter CR01 you should find the threads.
Ralf

what do you want to know? 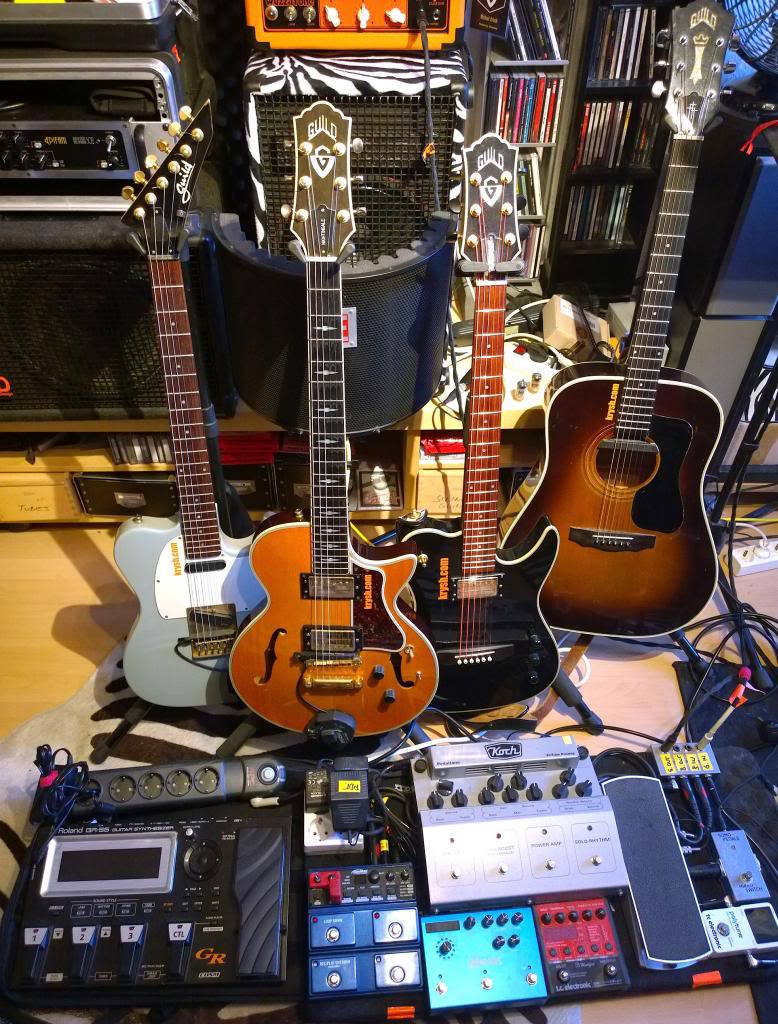 mine is heavily modified but it is awesome now.
Last edited by a moderator: May 9, 2020

well, for starters (because I know how sometimes things come "off" on forum boards etc. etc.)....this is not one of those "my guitar is special, so must be worth big bucks" threads that you see sometimes....I am just looking for info that I can not seem to put my hands on.

were there any that had other hardware than the nickle? heck, I did not even know they made any "colors" until I happened on a pic of a wine red one the other night....your black one, is that original finish?

I have (by all accounts I have read) the very last one....000097 and it has gold knobs, pup surrounds and tuners.....mine might be considered "natural" but it sure does have somewhat of a "burnished orange" appearance.

I have still not taken any pics but will....boys on the LP forum will string you up without pictures sometimes....lol.
Last edited: Feb 6, 2015 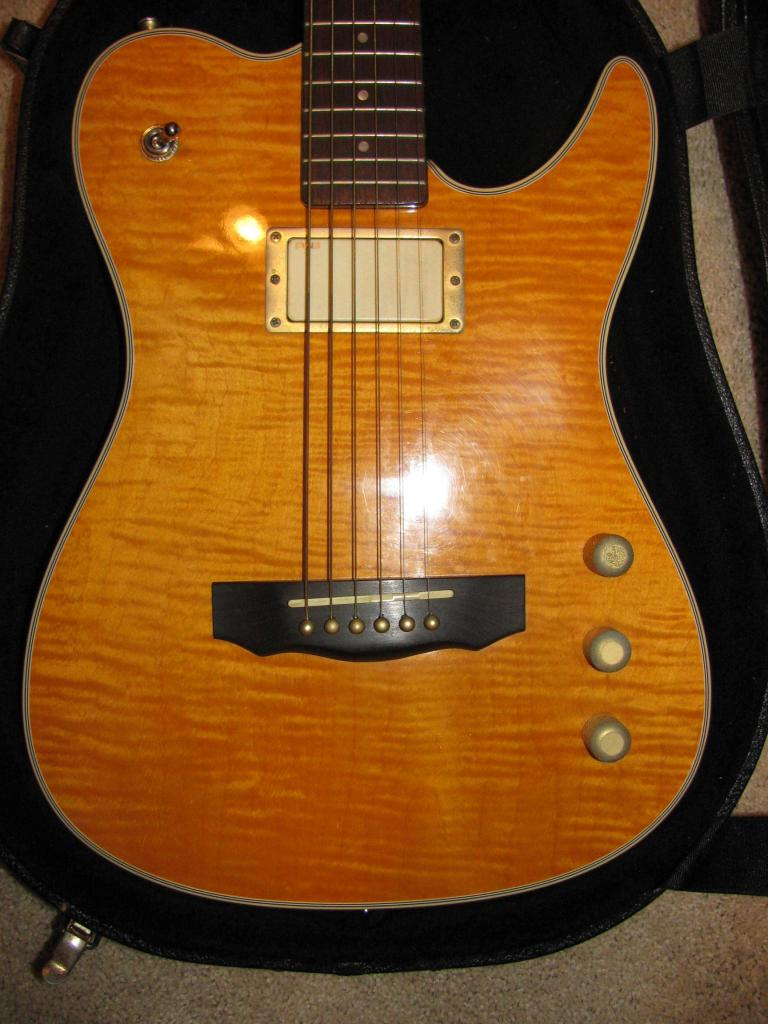 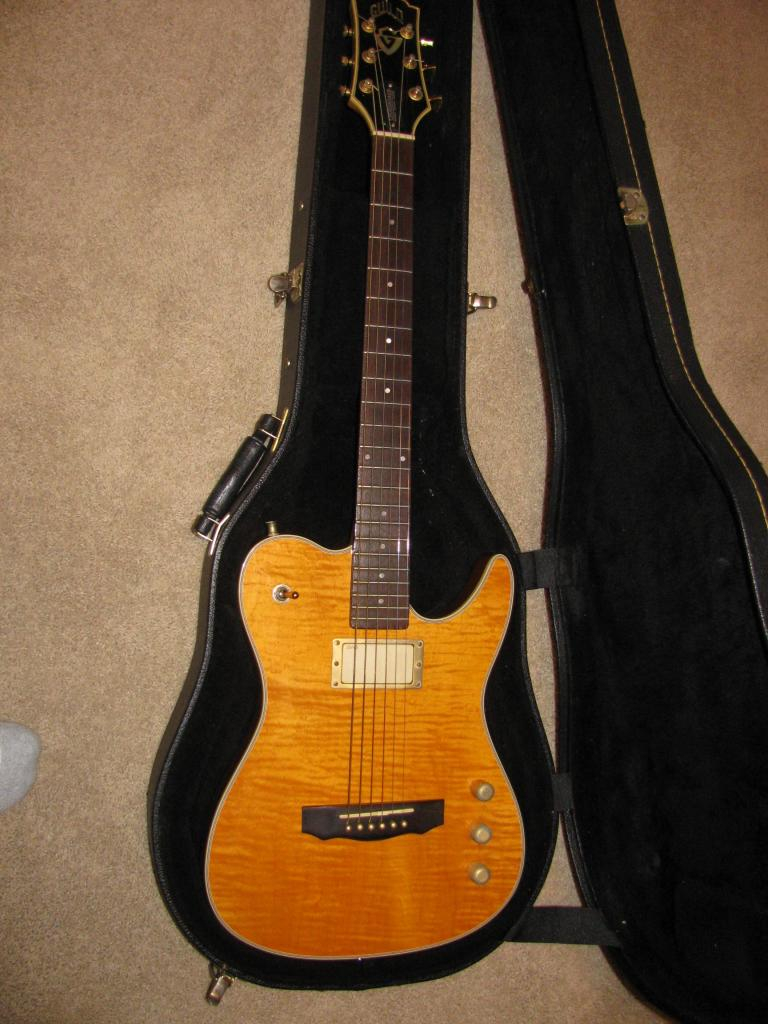 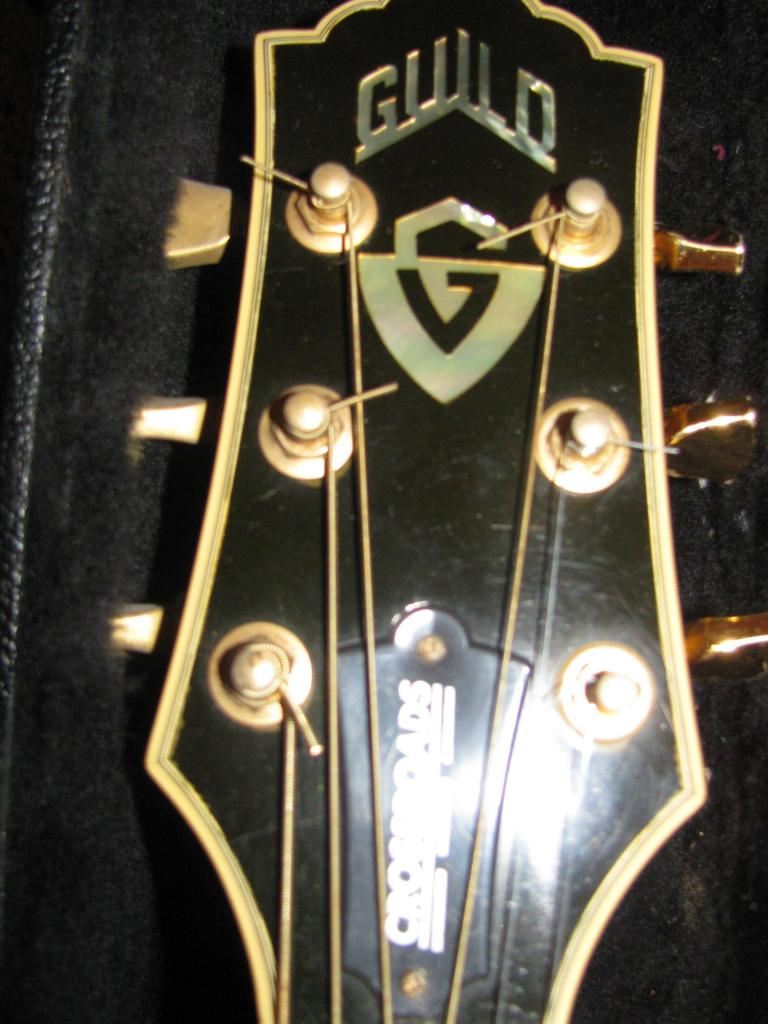 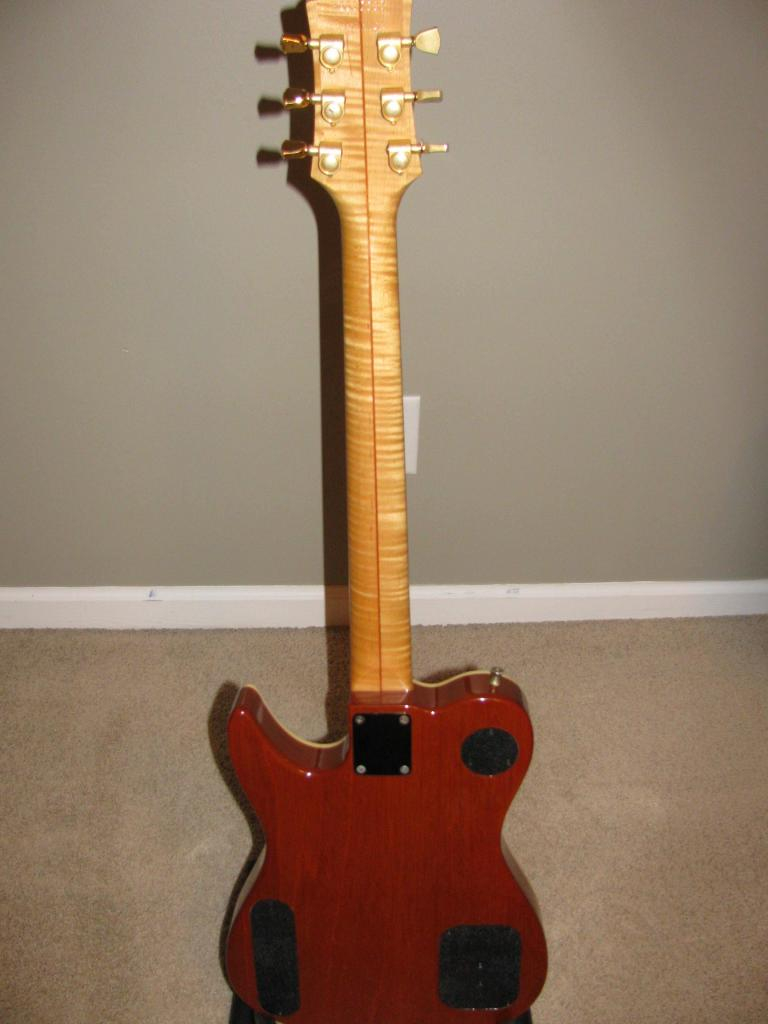 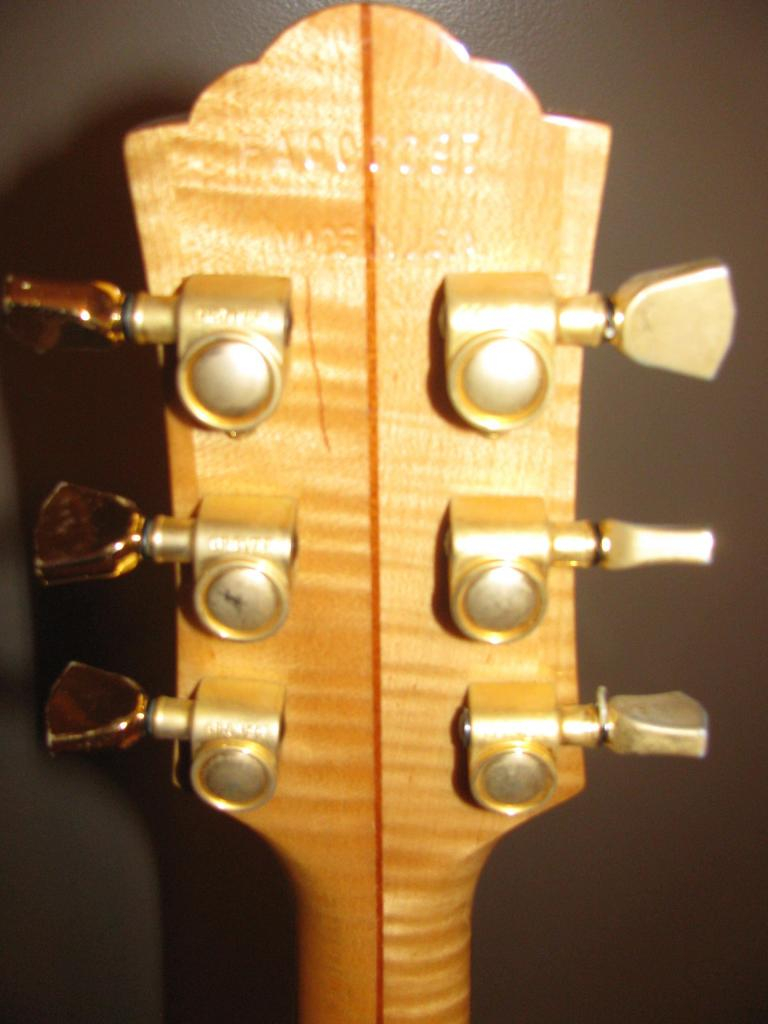 Never played one, but that is very pretty! Love the flame on the back of the neck!

Is that EMG pickup stock?

to the best of my knowledge yes, it is factory....it was turned upside down at one point...I am pretty sure the original owner (a friend of mine) was a guild endorser and was using it for the opening guitar parts of "Can't You See" for awhile....and was trying to get out of switching over to an electric for the ending of the song, but do not quote me on that.

here is what I have found:

According to the Guild plant foreman in 1996 (Fender owned Guild by 1996) they made only two runs of this instrument, less than 40 total, and sold less than 30 of them in 1994, the only year Guild made them. According to Guild, the highest and last serial number was FA000097. They were serially numbered, so there are no more than 97 of these even if the foreman's recollection of the quantity is inaccurate.

This is a 22 fret 6 string double-cutaway acoustic/electric made by Guild in Rhode Island in 1994 while Guild was owned by US Music. It is not the same as or even similar to the Slash endorsed Guild Crossroads dual neck and body combination 6/12 string acoustic/electric. It has all solid woods, mahogany back and sides, select maple top. Back and sides are one carved piece. Guild called the body semi-hollow, but it has no center block and is completely hollow inside with x-bracing. The top, back and sides are heavier than an acoustic or archtop hollow body. Overall body shape, appearance (except bridge), size and weight is that of a solid body electric. The neck is bolt-on 3-piece maple with a heavy rosewood fretboard.

Headstock set is 15 degrees and has Guild's typical wide rectangular acoustic shape with concave sides and domed top. Tuners are chrome Grover Rotomatics. The neck meets the body between the 16th and 17th frets with a small upper cut-away and a lower cut-away to the 21st fret. The bridge is rosewood and constructed exactly like an acoustic flattop bridge complete with bone saddle and bridge pins. It has electric and piezo acoustic pickups both active and powered by one 9v battery accessable through a back plate.

They comprise an EMG 89 humbucker/single coil at the neck and a Fishman AG-125 piezo under-the-saddle acoustic in the bridge. Each has its own volume control. The electric volume pushes and pulls to select the humbucker or the single coil in the EMG 89. The acoustic volume control is a remotely mounted pot from an internally mounted Fishman AGP-2 preamp. Fishman designed the AGP-2 for side mounting with its attached controls in the top upper shoulder or bout of an acoustic. Instead, Guild hid it inside on a back plate. The AGP-2's treble and bass controls are still functional and attached to it, hidden under the plate.

A master tone control sits next to the volume controls in a straight line on the top near the bottom lower bout and a 3 position toggle above the upper cutaway selects either pickup alone or combines the two. The control knobs are knurled chrome cylinders with the combined electric volume/coil switching push-pull knob knurled heavier than the others.

The finish is wood-grain orange on the body and natural on the neck and headstock back and sides. The headstock face is black with the underlined GUILD and large G logo inlaid. The inlay is very iridescent and pearly with a wide range of color. The truss rod cover plate is black plastic and has a white CROSSROADS engraved into it. The binding is 5 piece hand-set cream/black on the body top and headstock. The neck has no binding, but is beautifully finished rosewood with edge dot inlays on the edge of the fretboard. The fretboard face has small dot position inlays. It has no (and never did have) a pickguard.
Click to expand...

Very cool, Troubador... The flamed maple, of course, makes for some eye-popping looks.

hi ht,
well, yep mine is black from the factory and there are more, I know at least about another one also in germany. natural and red are the other colours I have seen in person. tuners and knobs have usually been chrome not nickel. emg is stock, but I have seen pictures of one with a regular humbucker. factory piezo preamp is a fishman agb-2. stunning flamed maple neck have been the rule on these guitars. here some more shots of mine: 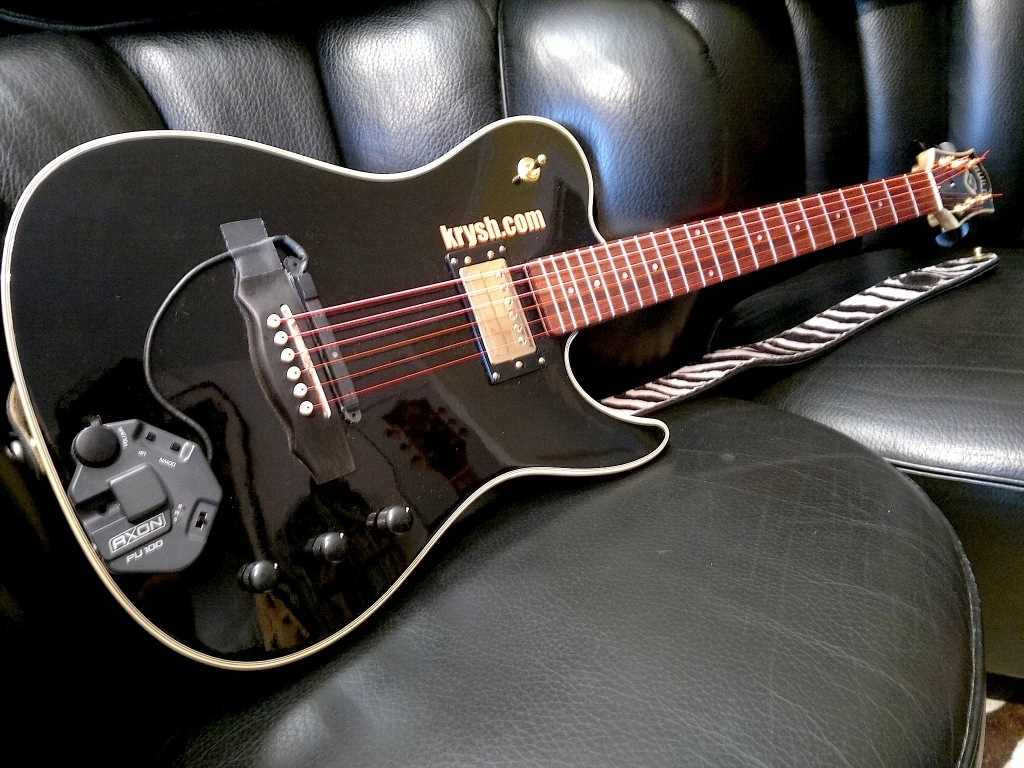 here still with the factory tuners: 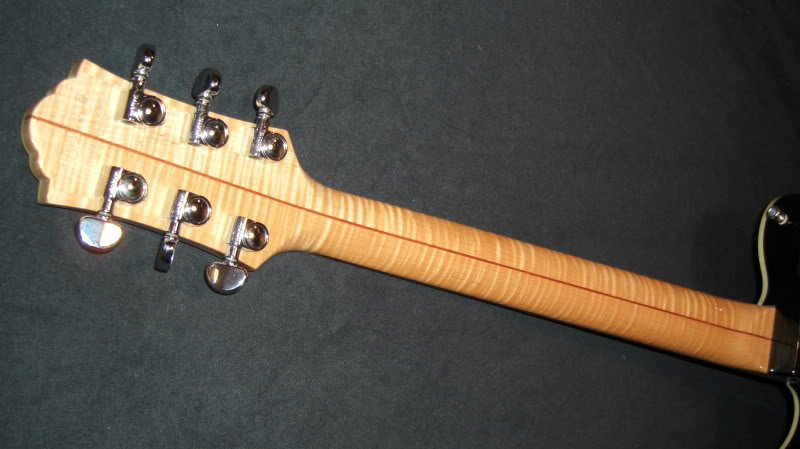 that is very nice!!

I like the "gold" on mine but it is a pain to keep clean......worked on my action a little yesterday hoping it settles by today after work.

any tuning issues with yours?

Hardcore troubadour said:
...any tuning issues with yours?
Click to expand...

thanks and nope, not worse than my d-46 and works fine under stage conditions, too.

after thinking about the infos you have found, I'm not sure about the massive top though. I believe they are braced but laminated, but I can't remember and dont want to unstring it and take off the pickup. maybe hans will know for sure?
Last edited: Feb 23, 2015

yeah, do not quote me on that, as I got the information from other sources....kind of why I wanted to verify here.

pardon my ignorance (i am actually a drummer first, hack guitarist second), but does Guild make a "truss rod tool"?

Not sure what exactly you are looking for. I guess Michael gave you some useful info. For more details I am afraid you need to wait until Hans publishes Volume II of "The Guild Guitar Book" which covers the guitars after 1977 (the existing Volume I covers 1952 until 1977). But if there is something specific you want to know just specifiy what exactly and somebody might know in the meantime. Also if it is a difficult but short question you might contact Hans privately via his webpage.
Oh I am sorry, I just noticed you also asked about the Truss Rod Tool.
It depends on the guitar and the truss rod used, but yes, Guild used to offer one but not currently, see: http://www.letstalkguild.com/ltg/sh...uss-rod-tool&p=1463481&viewfull=1#post1463481
That thread also showed some of the other Guild Truss Rod wrenches that exist.
Plenty of aftermarket options available however.

I think that era of guitar used a normal, single-action truss rod. Just unscrew the cover and have a look. A standard, 90degree Allen wrench set would likely work.

Some more recent guitars have changed truss-rod technologies and moved the nut from the faceplate to the interior of the body. Those guitars need some more uncommon tools to work on.

it is 1/4....problem is that I really have to have something 90 degrees because a nut driver will not allow me to get any pressure on it as the handle lays against the headstock.....maybe a small socket would work but I think it might mark the headstock, or be too big around to get in the TR hole?

thought maybe there was a small, low profile tool like Gibson does....
Last edited: Mar 9, 2015

Hardcore troubadour said:
thought maybe there was a small, low profile tool like Gibson does....
Click to expand...

Guild used to ship some older guitars with the same one that you can buy today in most guitar shops which carry Taylor guitars: https://www.taylorguitars.com/taylorware/truss-rod-wrench
Ralf